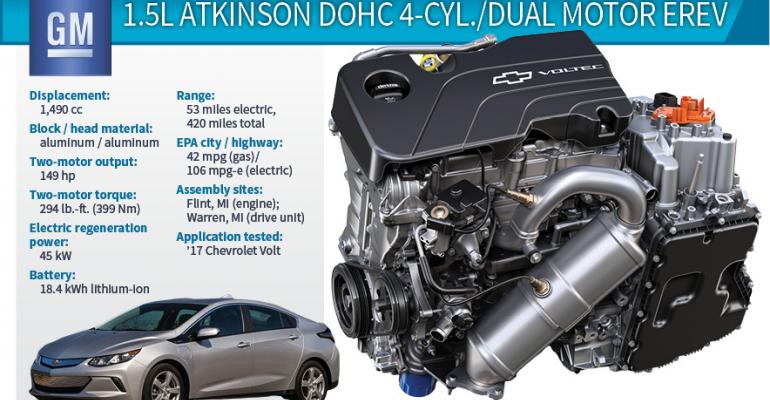 The Chevy Volt&rsquo;s innovative engineering and second-generation advances make its impact on the industry at large undeniable and its encore appearance on the Wards 10 Best Engines list richly deserved. &nbsp;

There are electric vehicles and plug-in hybrid-electric vehicles, and then there is the Chevy Volt’s Voltec propulsion system, a unique blend that delivers the best of both worlds: the spirited performance and whisper-quiet NVH of a premium EV and the versatility of a PHEV.

General Motors calls it an extended-range electric vehicle because when the Volt’s battery is depleted, the propulsion system operates like a serial hybrid, where the gasoline engine acts as a range extender by generating electricity that powers the car’s drive motors, instead of mechanically turning the wheels with assistance from electric motors like a common parallel hybrid.

But with 294 lb.-ft. (399 Nm) of tire-chirping torque on tap, we just call it fun. “Stunning level of quiet and refined power from 0 rpm and ample power across the range, low, passing and highway cruising,” says Editor Bob Gritzinger, whose personal car is a first-generation Volt.

“As a de-Volt-ee, I’m already guzzling the Kool-Aid, but a weekend drive in this second-gen makes me want the new powertrain even more,” Gritzinger says.

The first-generation Volt made it on the 2011 Wards 10 Best Engines list when it debuted, and the second generation makes our list for the second time in a row in 2017. That’s due in part because the new Voltec system isn’t just an improvement over the original, it’s a major leap in performance, battery range and scalability.

The last factor may not impress car shoppers, but the ability of GM to share most of the Voltec’s key components with the Malibu HEV and other GM electrified powertrains down the road means engineers will be able to continue to reduce costs and improve performance as volumes grow.

The second-generation 1.5L engine boasts 20% more power and 10% more torque vs. the previous 1.4L, and it features a high 12.5:1 compression ratio and cooled exhaust-gas recirculation. And, unlike the Gen I, it burns regular gasoline.

One of the most significant improvements is the propulsion system’s ability to use both motors in EV or range-extended mode at the same time, which substantially improves launch and low-end acceleration, contributing greatly to the fun factor.

The Chevy Volt’s innovative engineering and second-generation advances make its impact on the industry at large undeniable and its encore appearance on the Wards 10 Best Engines list richly deserved.