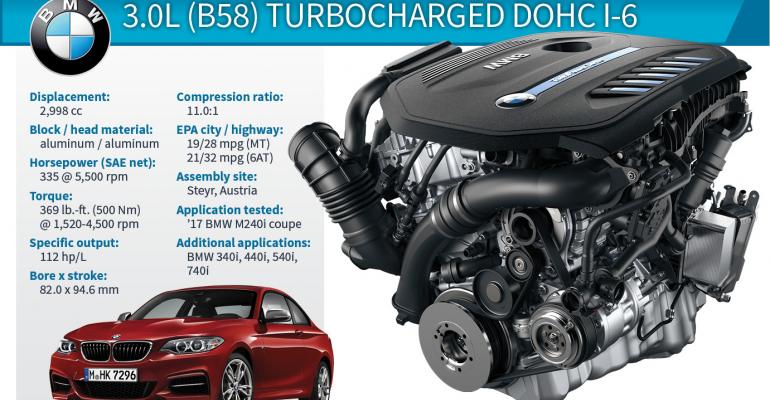 Other automakers would give up corporate secrets in exchange for just one of BMW&rsquo;s excellent inline-6 turbos. With two of them, BMW guards the I-6 legacy, as well as its brand heritage.

Last year, we were mighty fond of BMW’s new “B58” 3.0L turbocharged inline 6-cyl. engine in the 3-Series, and this year that relationship has evolved into an infatuation. You could say we’re going steady – and not just because this engine runs so smoothly.

And the engine feels a whole lot more powerful because the car is nearly 200 lbs. (91 kg) lighter than the all-wheel-drive sedan we tested last year. The 3.0L B58 idles with serene confidence and revs with buttery smoothness, no matter how close to redline.

You may ask, why does BMW need yet another world-beating inline-6 turbo with unparalleled refinement? (Don’t forget the diesel or the twin-turbo M3/M4). What was wrong with the N55 turbo-6 that won three consecutive Wards 10 Best Engines trophies from 2011 to 2013?

Anyone who’s driven the myriad vehicles powered by the N55 knows there’s nothing wrong with it. But BMW saw an opportunity in a new EfficientDynamics modular architecture for inline 3-, 4- and 6-cyl. engines, all of them displacing 500 cc per cylinder and sharing certain dimensions and interchangeable parts, such as pistons and connecting rods. This translates into greater economies of scale and easier serviceability.

With 10 Best Engines, we like to celebrate this type of smart engineering, which saves money, achieves manufacturing efficiencies and allows variants to power a wide range of Mini and BMW vehicles simply by lopping off two or three cylinders from the I-6.

We know the modular approach works wonders because the 2.0L 4-cyl. B46 engine in the BMW 330i came within a hair of joining its B58 big brother on the list this year. And the 1.5L 3-cyl. B38 that powers the Mini Cooper is a hoot, too.

But the fiercest battle facing the B58 I-6 in this year’s competition came from within: BMW’s own N55 turbocharged I-6, which some observers had expected would be sent to pasture, roared back into contention (with heavy modification) under the hood of the BMW M2, a track-ready coupe that does fine as a daily driver. Kind of like the M240i.

Other automakers would give up corporate secrets in exchange for just one of BMW’s excellent inline-6 turbos. With several of them, BMW guards the I-6 legacy, as well as its brand heritage.