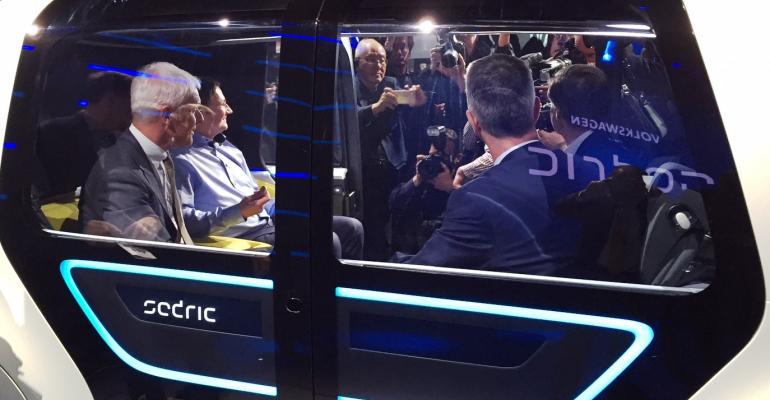 <p><strong>Instead of popping a couple more aspirin and apologizing once again for its misdeeds, VW put a smile on its face and rolled out some happy news: A grandiose plan to democratize future mobility.</strong></p>

GENEVA – “If you don’t like what people are saying about you, change the conversation.” It’s an old adage but it still works, especially in an era where almost nothing exists past two news cycles.

That seems to be the strategy for Volkswagen’s annual pre-show media gathering here. The atmosphere surrounding the Geneva Auto Show has been clouded with uncertainty following rumors and then the announcement early Monday that General Motors is selling its Opel and Vauxhall units to PSA; Britain’s planned exit from the European Union and VW’s own Dieselgate crisis, which lingers here like a bad collective hangover.

But instead of popping a couple more aspirin and apologizing once again for its misdeeds, VW put a smile on its face and rolled out some happy news: A grandiose plan to democratize future mobility headlined by a friendly autonomous people mover named Sedric.

Officially it’s called “Together – Strategy 2025,” and the automaker calls the plan its biggest transformation process in its history.

But just to make sure everyone knows VW’s vision of the future isn’t purely about healthy living and sensible shoes, it partially encircled the cheerful Sedric with some of the most powerful and decadently gorgeous supercars on the planet, as if to say, “Oh yeah, we still plan on making Bugattis, Bentleys, Lamborghinis and other great cars too.”

“In a year strongly marked by efforts to process the diesel crisis and in spite of the headwind in important markets, the Volkswagen Group put up a strong performance in operating business, setting new records in unit sales, sales revenues and operating profit before special items,” says Matthias Muller, Volkswagen Group CEO.

“Over 10.3 million customers worldwide placed their trust in us last year. We are thankful for that. We see this trust in our brands and product as a mission to continue developing and building the best vehicles here and now.”

The Volkswagen Group will introduce 60 new vehicles worldwide in 2017 and more than 30 more battery-electric vehicles will be launched by 2025, Muller promises.

“There will be no letting up on our present core business. But Volkswagen will work just as resolutely and passionately on the future of mobility,” he says.

Volkswagen has a long history of democratizing mobility by making fun and reliable vehicles that are affordable to mainstream buyers. Muller says he expects the automaker to continue this role in the era of new mobility and says VW is using its massive resources to make it so, including adding 37 competence centers and digital labs all over the world that are working on autonomous driving, artificial intelligence and other technologies necessary to create affordable products in the digital world of the future.

Muller says the Volkswagen-branded Sedric is symbolic of the company’s vision to become a leading global provider of sustainable mobility. It stands for a new self-image and new form of collaboration and knowledge transfer among the many companies within the VW Group, he says.

It certainly conjures up much more positive images than the Volkswagen name does now.