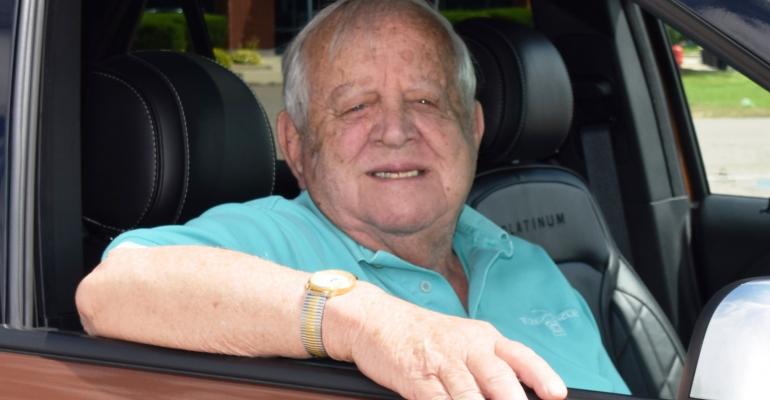 MBS for years has attracted 1,000-plus attendees and dozens of media types at the Grand Traverse Resort, but in 1972 the confab was staged at the Park Place Hotel in downtown Traverse City, and there were only about 30 attendees. &nbsp;

Editor’s note: In the automotive world, the first week of August almost is synonymous with the CAR Management Briefing Seminars in Traverse City. For decades it has been the place where the movers and shakers of the industry have networked, argued and made news. In 1972, former WardsAuto Editor-in-Chief  David C. Smith was the first journalist to recognize the value of the event as a means of learning about new trends and technologies. It led to a lasting relationship between WardsAuto and MBS, which continues on with the start of today’s conference.

Two score and five years ago I traveled to Traverse City for what were then known as the University of Michigan’s Office for the Study of Automotive Transportation’s annual Seminars, forerunner of today’s Center for Automotive Research (CAR) Management Briefing Seminars.

Although much has changed since then, including me, I haven’t missed a session since 1972.  Over those fleeting years I’ve witnessed a sea change in the global auto industry.

I have heard or interviewed CEOs and other high-ranking executives from nearly every automaker worldwide who’ve spoken at MBS, but I have never played a round of golf, one of the major leisure activities of the event.

MBS for years has attracted 1,000-plus attendees and dozens of media types at the Grand Traverse Resort, but in 1972 the confab was staged at the Park Place Hotel in downtown Traverse City, and there were only about 30 attendees and two reporters: me and my sidekick, Dick Waddell.

U of M Prof. Dave Cole presided over that 1972 seminar and served as the “face” of the conference for the next 38 years. Cole’s colleague, the late Prof. Don Smith, organized the Seminars during the 1960s with a focus on automotive manufacturing. Cole retired from the university in 2000, was instrumental in launching CAR in 2003, and remained as its chairman until retiring in 2010.

At Don Smith’s suggestion, Cole devoted the 1972 session to the Wankel rotary engine, then a hot topic: 21 companies had obtained Wankel licenses from Curtiss-Wright, U.S. representative of the patent holder, Volkswagen subsidiary Audi NSU Auto Union. The engine was named for German Inventor Felix Wankel, who won his first patent in 1929.

Although primarily targeted for automobiles, the Wankel also was, and remains, an intriguing power source for a variety of applications including motorcycles, outboard engines, aircraft and more.

Chief attributes are its power output compared to its compact size, a third that of a comparable V-6, plus light weight, smooth torque, minimal vibration and lower material cost. Despite decades of tweaking, however the engine still is saddled with relatively poor fuel economy, plus higher oil consumption, and emissions and durability problems mainly related to sealing.

But 45 years ago “The Little Engine that Could” was tantalizing. Somehow many engineers were certain its shortcomings could be overcome.

Mazda, introduced its first rotary-engine car, the Cosmo Sport, in 1967, followed by the RX2, RX3, RX4 and sporty RX7. They were selling briskly in the U.S., and General Motors obtained a license in 1970 and was gearing up to introduce the engine by 1975. Ford and Chrysler had Wankel programs, too, but lacked passion for the technology. American Motors planned to buy Wankel engines from GM for the new Pacer compact car it was developing.

At Ward’s, we covered what then was called “the Wankel Revolution” from every angle, inspiring us to launch a new twice-monthly publication called the Ward’s Wankel Report, first published on July 12, 1972.

The timing of Cole’s mid-July Wankel seminar could not have been better from our standpoint because it attracted the cream of the crop of global rotary engine enthusiasts.

Cole earlier had studied the engine’s emissions problems under a Curtiss-Wright contract with U of M, and by this time had become a Wankel expert in his own right.

His father, Ed, was GM’s president and champion of the GMRE program.

Ed Cole later spoke at a Seminar held at the downtown Traverse City Holiday Inn, but when he retired in 1974, GMRE was effectively shelved.

The Wankel hoopla continued, however, but with few exceptions it remained mainly a Mazda and Audi show. Mazda was inspired by Audi’s Ro80 sedan, which appeared in 1967 as the first volume Wankel-powered car.  Audi built 30,000 Ro80s but didn’t go beyond that. Original price: $6,000, expensive at the time.

Unfortunately the Wankel arrived on the eve of two jarring events that reshaped the auto industry: The early 1970s Arab oil embargo that sent gasoline prices sky rocketing, and the advent of exhaust emissions regulations. Both hit hard on the engine’s shortcomings.

Still, over the years Mazda built 1.99 million rotary-powered cars but eventually phased out all except the RX 8 sports car, which lasted until 2011. Now its Wankel stable is barren, although recent reports suggest a Wankel RX9 could arrive in 2019.

MBS has evolved to become a premier global automotive conference where networking, not a commonly used word in the early days, is as much an attraction as the information imparted by its long list of industry experts.

The conference routinely produces news, perhaps none more headline grabbing than the Chrysler-Daimler Benz merger announced in May1998. Details of the deal, including the payoff for Chrysler executives, were announced worldwide on Aug.7 that year while the Seminars were in session and immediately dominated the spotlight.

Looking back, that MBS Seminar was the most newsworthy I covered, although the news emanated elsewhere. I had known Chrysler Chairman Bob Eaton for years. His payoff of $66.2 million in stock of the merged company, with his overall compensation soaring above $100 million, was big news at the time.

Dave Cole says he has a difficult time selecting the most memorable speakers, but he singles out Ford CEO Alan Mulally (2006-2014) as among his favorites. Unlike most speakers, Mulally showed up dressed casually and spoke without a prepared speech about the importance of teamwork, Cole says.

I approached Cole in 1995 and suggested that Ward’s would be delighted to publish an MBS daily newsletter as an offshoot of Wards Auto World magazine if MBS would distribute it each day to attendees. He enthusiastically agreed.

The concept was simple: Our reporters would cover the speeches and troll the halls of Grand Traverse Resort for exclusives.

That’s basically how we’ve done it ever since. Advancing technology since the first issue went to press has helped immensely, but then and now the focus has been on the solid tenets of news gathering.