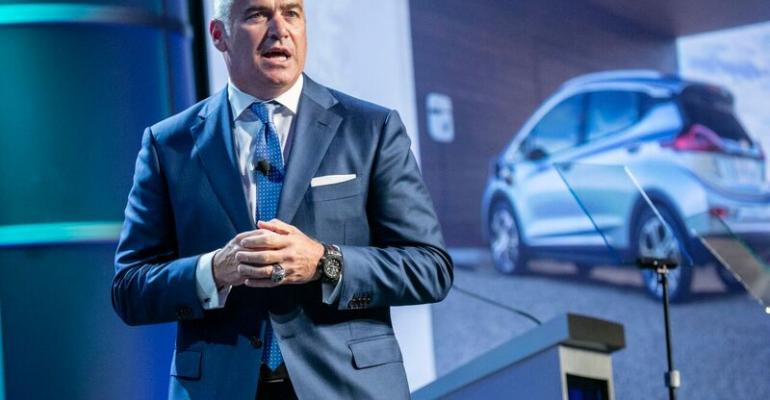 The Chevrolet Bolt battery-electric vehicle was designed specifically for autonomy, and GM is the first company to actually build an autonomous vehicle in a high-volume factory, Kiefer says.

“Our business is continually changing,” he says, pointing to how GM is becoming more agile and disciplined by doing things such as selling its Opel operation to PSA in Europe, a deal finalized earlier this week.

The goal now is to deliver strong returns on the core auto business and focus on next-generation technologies as the whole idea of transportation starts to undergo massive change.

“We know being the biggest is not necessarily the best,” he says, so GM is investing in key new automotive areas such as electrification, ride-sharing and autonomous vehicles. GM’s Maven ride-sharing operation supplied 12.1 million rides this past year, he says, and GM has made big investments in technology companies such as Cruise, which develops software for self-driving vehicles.

He also reaffirms GM’s commitment to offering diesel engines in a wide variety of sizes and vehicles, and proudly points out that after hitting a low point a few years ago, GM now is scoring well on the annual Planning Perspectives survey of OEM/supplier relationships.

But in addition to his enthusiastic speech on the future of GM, Kiefer also makes a poignant plea for everyone to get involved in efforts to limit distracted driving, which is linked to as many as 90% of fatal crashes.

While advanced driver-assistance systems and autonomous cars will minimize the severity of accidents in the future, the problem needs to be addressed immediately, he says emphatically. This call to action is especially powerful because Kiefer’s family suffered a tragic loss last year due to a distracted driver.