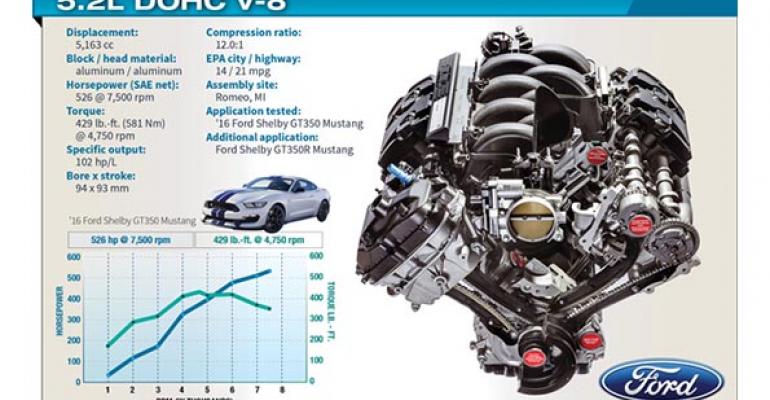 Benchmarking two Ferrari engines for performance and NVH, Ford engineers set out to create something magical with its 5.2L V-8 for the Shelby GT350 Mustang.&nbsp;They succeeded.&nbsp;

Wards 10 Best Engines competition has recognized outstanding powertrains for 22 years. This installment of the 2016 “Story Behind the 10 Best Engines” series looks at the development of Ford’s high-performance 5.2L “Voodoo” V-8.

With ever-increasing emphasis on efficiency and electrified propulsion, Wards 10 Best Engines have evolved into a highly diversified group, including numerous hybrid-electric vehicles and plug-ins in addition to internal combustion engines big and small. For 2016, WardsAuto editors chose to honor just one V-8: the naturally aspirated DOHC 5.2L in the Ford Shelby GT350 Mustang.

“Our panel of eight gobsmacked editors deems it worthy of a 2016 Wards 10 Best Engines trophy because it runs like American Pharoah on a trough full of steroids,” writes Editor Tom Murphy. But beyond its rare flat-plane-crankshaft and distinctive full-throttle yowl are substantial improvements compared to the fine 5.0L DOHC V-8 that earned Wards 10 Best trophies in 2011 and 2012.

It is an all-new engine, not a derivation of the 5.0L, Ford says. “Only the valve keepers and keys, a rear seal retainer and some fasteners are shared with any other Ford V-8,” says chief engineer Eric Ladner. “Different bores, water jackets and head bolts drove us to a new block. The crankshaft, rods, bearings, cylinder heads, intake and exhaust valves, oil pan, pickup tube, gaskets and even the rear crank seal are unique.”

Though larger in displacement than the 5.0L and 20% more powerful, it is a significant 13 lbs. (5.9 kg) lighter with a higher 12.0:1 compression ratio, 10% higher volumetric efficiency and less friction. It also has a stupendous 8,250-rpm redline. That redline, and the high levels of airflow the engine requires, are the primary reasons for its flat-plane crank.

A high-flow intake manifold and long-tube exhaust headers can maximize flow, but long headers move the catalytic converters too far away for emissions-compliant light-off. The flat-plane crankshaft – which positions half of its eight pistons 180 degrees opposite the other half (when four are at top dead center, the other four are at bottom) – effectively makes the engine’s short-tube headers perform like long ones. And with big high-lift (14 mm) valves and a large (87-mm) throttle body, Ford says the 5.2L’s intake and exhaust ports flow better than those of the Ferrari 458 flat-plane-crank V-8 it was benchmarked against.

The crankshaft itself is gun-drilled to further reduce weight and improve breathing. And the 10-quart (9.5L) composite oil pan is lighter than the 5.0L’s 8-quart (7.6L) pan with baffles tuned to prevent oil starvation during high-g cornering and braking.

The 5.2L V-8 team’s objectives and targets began with those of the car for which it was designed. “It would be a serious track car that is street capable as well, so that set up the parameters of what was important,” Ladner relates. “Discussions were around light weight and high performance, not just power but the broadness of the torque curve and power band, especially in the range where it will be used on the track.”

The need for high torque in a wide rpm range led to big, long intake runners and the flat-plane crank. “We try to let attribute targets drive the hardware content required to deliver it,” Ladner says. “We’re always looking at what to do next to make the next step in performance, and the flat-plane crank was on the table as a potential technology.”

Achieving valvetrain stability at such high engine speeds presented a challenge, but meeting fuel-efficiency targets and emissions requirements did not. “We made all the right assumptions from the beginning,” he says, “so no major challenges there.”

But the flat-plane crank does bring an NVH challenge: “Lateral shaking forces are higher than we generally deal with on cross-plane engines,” Ladner says. “But while the order content and direction of vibration are different, it is part of our normal design process to look at vibrations for the engine system as well as for each individual component. We took into account the higher vibration levels as inputs to our CAE tools and [NVH] testing, and our design verification plans also involved a number of hours of shaker-rig testing. We just went through the design process as we normally would for any engine, but at higher-level inputs.”

While the engine team benchmarked the Ferrari 458 engine for performance, the vehicle team analyzed a front-engine Ferrari California for NVH. “We took measurements and looked at the parts and how they implemented some things,” Ladner says. “I think we beat it.”

It was not a cost-is-no-object program, but there was more freedom because the car would be priced accordingly.

“Again, lots of upfront planning,” Ladner says. “We put together assumptions of which parts would have to change, and it was pretty much everything. We have some history on what those types of parts cost in low volume, then put together a good cost projection and program target. It was a much more generous target than most volume mass-production programs, but managing and meeting that was maybe the biggest challenge.”

Still another hurdle, given the very low volume, was getting the right suppliers on board. “At these volumes it sometimes makes sense to go to special suppliers for certain things that may not be handled as well by bigger ones. In some cases, we have to be a little more creative to find someone we think will fit the part and the low-volume program.”

The engine is assembled by two skilled builders who follow it along a low-volume “niche” line in a separate building behind Ford’s Romeo engine plant, and they sign it when they’re done. Ford built just 100 GT350 and 37 (still more track-capable) GT350 Rs for 2015, the 50th anniversary of the original Shelby Mustang GT350, because that original 1965 run was 37. But for 2016, the production of regular models is expected to total 3,000-5,000 units.