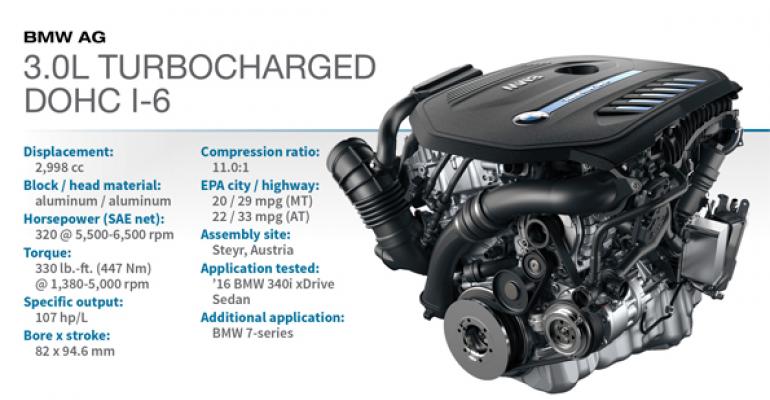 BMW&rsquo;s B58 I-6, springing from a new EfficientDynamics modular family of 3-, 4- and 6-cyl. engines, has a larger turbocharger, all-new water-to-air intercooler, longer stroke, more horsepower and torque and several fuel-saving technologies.

If anyone wants to challenge BMW’s stubborn adoration for the inline 6-cyl. architecture, a Bavarian powertrain executive need only cite the final page of the program for the 2016 Wards 10 Best Engines ceremony, to be held Jan. 13 in Detroit.

On that page, BMW reigns as the all-time leader, with 32 trophies since 1995. All but six of those were earned by engines with six pistons marching in single file.

Marching is an apt analogy when describing the inner workings of a BMW I-6, because the silky smoothness, whether marching at double time or in a full-on sprint, suggests a troop of lean, mean fighting machines moving in perfect unison, urging each other to be all they can be.

This year, BMW takes home yet another trophy for the new 340i sedan and its turbocharged I-6, the 3.0L B58, which springs from a new EfficientDynamics modular family of 3-, 4- and 6-cyl. engines used by the BMW and Mini brands.

More challenging was deciding which of these three engines belongs on the 2016 list. The B38 3-cyl. earned a trophy in 2015 and returned for test drives this past fall under the hood of the 134-hp Mini Hardtop. It does not find the winner’s circle but makes a favorable impression.

The 228-hp B48 2.0L, evaluated in the Mini John Cooper Works hardtop, scores well and truly was in the hunt. But we opt for one engine to represent the EfficientDynamics family, and the B58 truly is the golden child.

One might suggest BMW engines change very little from one generation to the next, so let’s explore that claim.

The last I-6 turbo was the sublime N55, which earned its 10 Best Engines stars in 2011, 2012 and 2013. Like the new B58, it displaced 3.0L and relied on direct fuel injection, twin-scroll turbocharging, all-aluminum construction, Double-VANOS variable camshaft timing and Valvetronic fully variable valve lift.

But many of those individual components were improved for the B58. The block and head were completely re-engineered with a stroke that is extended by 0.19 ins. (5 mm) and a bore diameter that is .08 ins. (2 mm) smaller, as well as a higher compression ratio.

The new turbocharger’s turbine wheel is 6% larger, and the compressor wheel diameter is 10% larger, resulting in a 20% increase in boost pressure.

An all-new water-to-air intercooler is integrated within the intake plenum, freeing up space under the hood. The new system lowers the charged air volume between the compressor and intake, improving performance by maintaining more even temperatures en route to combustion.

A sophisticated new engine-mounted encapsulation system acts like an insulating blanket that helps the engine retain heat for up to 36 hours after shutdown. BMW says the retained heat allows the B58 to start easier, warm up quicker and reduce emissions. 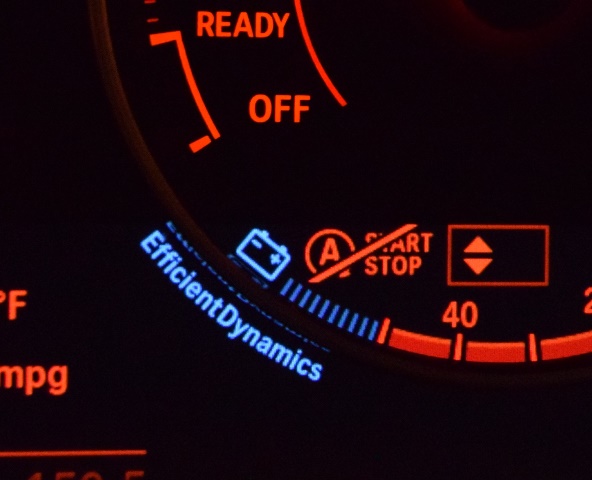 The B58 incorporates several fuel-saving gadgets, including stop/start, coasting, brake-energy regeneration and an on-demand coolant pump, electronically controlled oil pump and electromechanical power steering that consumes no electrical power when driving in a straight line. Whenever the air conditioning is not being used, its compressor is automatically disconnected from the engine.

BMW engines can be efficient and at the same time deliciously fun to drive, without needing outrageous power or torque numbers to feel or sound gloriously potent. In the 3-Series, the brand’s volume crown jewel, it’s all about leveraging the inline architecture and the sensation of perpetual balance.