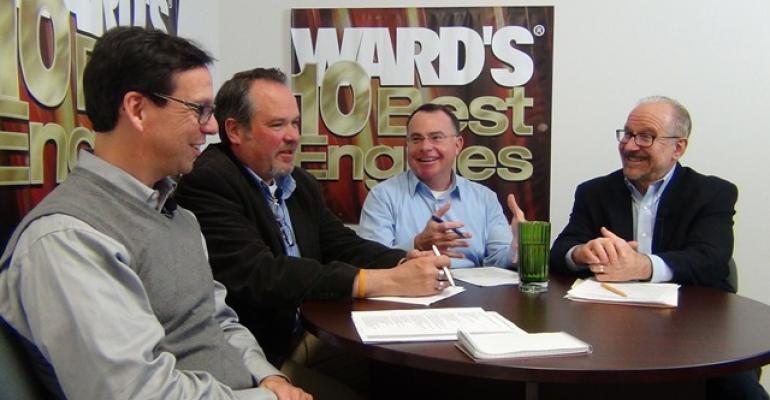 Little Engines That Could

The three smallest engines we tested among 36 nominees for 2015 Ward&rsquo;s 10 Best Engines earned spots on our tough-to-crack list. The nominees included 18 4-cyl. engines, and 15 of those were turbocharged.

What a year it’s been for powertrain development. Engineers have been asked to downsize engines, and, boy, are they delivering.

Consider that the three smallest engines we tested among 36 nominees for 2015 Ward’s 10 Best Engines earned spots on our tough-to-crack list.

The 1.0L Ford EcoBoost 3-cyl., the 1.5L Mini 3-cyl. and the 0.7L 2-cyl. range-extender in the BMW i3 EV hold their own against bigger engines and are a testament to the dogged pursuit of efficiency, friction reduction and power density.

Other downsized engines deserve a shout-out as well. Toyota made an admirable attempt at its first modern turbo-4 in the NX CUV. Ten years ago, could any of us have imagined a luxury ute would get around with only four cylinders of motivation? Or that a fullsize pickup (from Ford) would get the job done with a mere 2.7L of displacement?

Of the 36 all-new or significantly improved engines or propulsion systems evaluated this year, 18 were of the 4-cyl. variety, and 15 of those were turbocharged.

So how do we separate the winners from the rest of the pack? By paying close attention to real-world fuel economy, throttle response and noise, vibration and harshness. Do that and engines such as Volkswagen’s 1.8L, Subaru’s 2.0L boxer and Volvo’s 2.0L (all of them 4-cyl. turbos, by the way) rise to the top.

The most extreme form of downsizing can be seen in the EVs, and we tested four of them – five if you include the ground-breaking hydrogen-powered Hyundai Tucson fuel-cell vehicle, which made our list. Is it time for piston manufacturers to panic?

Not that we’re forsaking bigger engines. We picked the Ram 1500 3.0L diesel V-6 because it’s ideally suited for pickup duty, as well as two 6.2L V-8s, one in the Chevy Corvette and the other in the Dodge Challenger SRT Hellcat.

We will, however, bemoan the absence of new naturally aspirated 6-cyl. engines. We tested seven 6-packs and only one was naturally aspirated, the Honda Accord’s 3.5L. The only reason it was in the competition is because it was a returning winner. It didn’t make the cut this year, although it logged better fuel economy than some of the turbo-4s.

Other takeaways from this year’s evaluations:

This is the 21st year for Ward’s 10 Best Engines. Eight editors drive the vehicles in October and November during their routine commutes in metro Detroit.

To be eligible, a new or improved engine or propulsion system must be available in a production vehicle in the U.S. market within the first quarter of 2015.