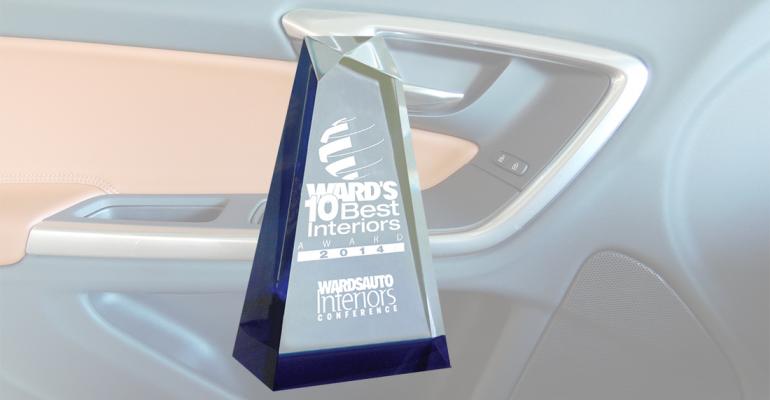 Even &ldquo;entry-level&rdquo; cars earning Ward&rsquo;s 10 Best Interiors honors this year are delivering premium content. Each day for the next two weeks, WardsAuto will profile a winning interior.

This isn’t the first year luxurious passenger compartments have fared well in the Ward’s 10 Best Interiors competition. Audi, BMW, Cadillac, Lexus, Range Rover and Volvo have made the cut in recent years.

But the 2014 honorees, even those hailing from non-premium brands, are so lavishly appointed that a question springs to mind: Where exactly does one draw the line between mainstream vehicles and those considered “luxury?”

Climb behind the wheel of the least-expensive car on our list, the $24,010 ’14 Kia Soul+, and it’s hard to classify this well-appointed interior as down-market or entry-level.

It has leather-trimmed seats, navigation, a heated steering wheel, heated and cooled front seats, a premium audio system and the UVO telematics system.

OK, the lighted speakers, neon-green stitching and funky aesthetics are too edgy for traditional high-end customers, but the feature content is, without question, first-rate.

Even the $37,525 Jeep Cherokee Limited, with its blue-and-brown leather interior, adaptive cruise control and ability to park itself, seems almost too swanky for the Rubicon Trail.

Consider also the Chevrolet Corvette Stingray. Sure, it’s expensive ($71,960), but the interior finally puts Corvette in an elite class with the Porsche 911, and it also beat out the spiffy cockpit of the $100,370 Jaguar F-Type roadster.

The only pickup truck making the list this year is the $56,685 GMC Sierra Denali, which is well- positioned to capitalize on the trend toward feature-rich pickups.

All three of these faced intense competition from just about every premium brand under the sun and yet earned their stripes with breathtaking beauty, nap-worthy comfort and lots of clever highlights.

Other takeaways from this year’s competition:

Winners will be honored at the WardsAuto Interiors Conference on May 21 at The Henry Hotel in Dearborn, MI.