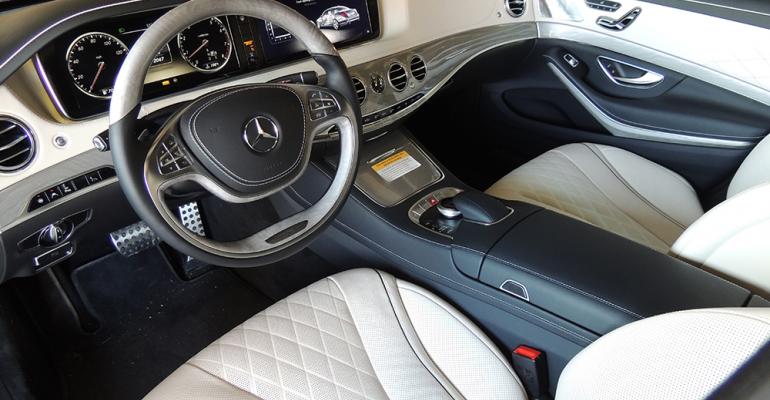 From Kia to Rolls-Royce, Interiors Honored

Culled from a pool of 41 new or redesigned vehicles, the 2014 Ward&rsquo;s 10 Best Interiors represent a broad swath of cars and utility vehicles available in the U.S.

Massaging seats, bold new applications of ambient lighting, a key that can’t be locked in the trunk and a headliner that mimics a starry sky are among the technologies showcased in the 2014 Ward’s 10 Best Interiors winners.

The honorees represent a broad swath of cars and utility vehicles available in the U.S. with advanced human-machine interfaces, high-quality materials, outstanding comfort and, in some cases, breathtaking aesthetics and limited self-driving capabilities.

To be eligible for Ward’s 10 Best Interiors, a vehicle must offer a new or significantly redesigned interior. Unlike with Ward’s 10 Best Engines, there is no price cap.

This year’s winners in alphabetical order with as-tested sticker prices:

Winning automakers will be honored May 21 at a ceremony during the WardsAuto Interiors Conference being held at The Henry Hotel in Dearborn, MI.

“This year’s list is the most diverse we’ve ever had, from affordable compacts to ultra-luxury cars such as the Rolls-Royce Wraith,” says WardsAuto World Editor-in-Chief Drew Winter.

“In each case, the interior plays a pivotal role in establishing the vehicle’s brand character and making it intensely desirable to buyers.”

General Motors’ seventh-generation Chevrolet Corvette Stingray muscles its way onto the list with an interior that reinforces the 460-hp coupe’s high-performance credentials.

As is the case in many sports cars, black dominates the new ’Vette’s cabin.

But judiciously applied accents such as carbon-fiber trim (a $995 add-on), a suede-like microfiber headliner (another $995 add-on) and contrasting white stitching on the supportive bucket seats make the Corvette interior highly competitive with more-expensive rivals from Porsche and Jaguar, securing its status as a sports car for the ages.

High-visibility reconfigurable digital graphics in the instrument cluster and central display do a great job communicating mission-critical information to the driver both on and off the track.

Chrysler comes to the midsize sedan market with the new 200, arguably its best segment offering in decades, and the interior plays a starring role. Perhaps the greatest single attribute of the up-level 200C tested is its price point.

The car is extremely spacious, and the back seat is roomy enough for even Klaus Busse, Chrysler’s chief interior designer, who stands tall at 6-ft.-7-ins. (2 m).

On the technology front, the 200 will even park itself, both in parallel and perpendicular situations, and the trunk pops open if, for instance, a frazzled editor should accidentally lock the key fob inside.

GM might be taking heat for lackluster exterior styling of its all-new fullsize pickup trucks, but the interiors are first-rate. The GMC Sierra Denali scored slightly higher in our competition than its Chevrolet Silverado High Country platform mate, although both are similarly equipped.

The truck is well-suited for the work site, with lots of storage cubbies, a massive center console and features necessary for extreme weather, such as heated and cooled front seats and a heated steering wheel.

Hyundai earns a trophy this year with the brand’s crown jewel: the Equus Ultimate, which edges out two other excellent Hyundai Group interiors (Genesis and Kia K900) that also were in the hunt as staff votes were tabulated.

The redesigned Equus stands out for its surprising value quotient. For less than $70,000, it is impeccably finished and delivers the same limousine-like experience to passengers as long-wheelbase luxury cars priced well into six figures.

The second row is cavernous, and the rear seats recline and offer multiple lumbar positions. Tapping the “Relax” button on the rear console fully reclines the seats, and there's a separate button to push the empty front passenger seat forward to provide even more legroom.

With all the latest electronic and safety features, the Equus is for a billionaire with a strong sense of value. This interior beat out several entrenched luxury brands in the competition and puts the global auto industry on notice that Hyundai is deadly serious about its place among premium manufacturers.

Chrysler’s second winning interior can be found inside the all-new Jeep Cherokee Limited, which advances the styling cues from its big brother, the Jeep Grand Cherokee, and manages to feel right at home both on city streets and deep in the backwoods.

Uniquely trimmed for cosmopolitan edginess in shades known as Vesuvio Jeep Brown and Indigo Blue, the new Cherokee interior stands apart from the risk-averse CUV pack and is everything a ute should be.

Controls are big and accessible and placed where Jeep loyalists want them. Information from the Chrysler family’s excellent quick-response central display touchscreen, which governs everything from the heated steering wheel to cell-phone syncing with Bluetooth, is easily navigated without being overwhelming.

Five years ago, WardsAuto honored the Kia Soul as the industry’s “grooviest interior.” The car’s redesigned cabin continues to fit the bill while offering outstanding comfort, space, ergonomics and value.

Gray interiors frequently leave our judges cold, but the Soul uses a 2-tone scheme that combines successfully with breakthrough aesthetic elements such as the swoopy door trim, neon-green accent stitching and an instrument panel with an upright design that connects nicely with the tall, boxy greenhouse.

Throw in a host of upscale features, such as the 8-in. (20-cm) navigation screen, back-up camera, panoramic roof, Infinity audio system and lighted speakers that keep time with the music, and the $24,010 Soul+ is a stylish bargain that’s hard to resist.

Another affordable 2-tone interior that combines premium appointments with sporty functionality can be found in the new Mazda3, which carries some of the features found in last year’s winning Mazda6 cabin into the compact segment.

The Mazda3 is the automaker’s best-selling car, and it’s easy to see why. It’s not every day an entry-level model can be had with beautiful interior styling, a sophisticated central controller that resembles that of an Audi and advanced safety features such as radar-based adaptive cruise control, forward-obstruction warning and lane-departure warning.

The aesthetics put the Mazda3 in a category by itself, with carbon-fiber trim, three shades of contrast stitching (red, white and black), a head-up display and upscale metallic accents such as an instrument cluster that shimmers at night.

Mercedes-Benz rewrites the interior playbook not only for its own brand but perhaps for all German luxury cars with the new S-Class, a cabin that exudes richness and style for the tech-savvy driver without being intimidating.

Approach the car at night, open the door and expect to be utterly stunned by hundreds of LEDs lighting up the cabin. Choose from seven colors of ambient light, from Daylight White and Dawn Red to Sunset Orange or, if you need a heavy dose of futuristic romance, Moonlight Blue.

There’s also the hot-stone massage treatment, built-in pillows for the reclining rear seats, perforated leather, metallic-stained wood trim and a double-wide display screen about the size of a billboard. The S550 also can steer itself and lock on to the speed of the vehicle ahead in stop-and-go traffic. Go ahead, take your hands off the wheel and foot off the pedals, until speeds pick up.

The car is loaded with so many customizable high-tech gadgets that days can be spent amusing oneself without ever leaving the driveway. It’s the kind of technology that can keep an interior feeling fresh for any demanding buyer for many years to come.

Luxury cars represented roughly half of the 41 interiors evaluated in this year’s competition, and the Rolls-Royce Wraith ranks among the winners by celebrating elegance in much the same way the brand has been doing so for 110 years: with handcraftsmanship.

But there’s a twist: Rolls-Royce interiors of the past could be considered stuffy and aloof, and well they should, considering the rarefied pool of Powerball-wealthy buyers.

The new 2-door Wraith is something different, exuding a high-octane youthful energy inside and out. Swing wide the rear-hinged carriage door, and the matte-finish Canadel paneling made of Brazilian rosewood, working in tandem with the lusciously trimmed leather seats, can leave any discerning enthusiast positively slack-jawed.

And did we mention the fiber-optic headliner that guarantees a starry sky even on cloudy nights? Add up these features, as well as the platinum paint job, lambswool floormats, monogrammed head restraints and lighted Spirit of Ecstasy ornament that hides and rises from the hood, and we’re talking absurd money, but an unrivaled driving and riding experience.

Last but not least, the Volkswagen GTI represents the pinnacle of the seventh-generation Golf family going on sale this year in the U.S., and the interior demonstrates VW’s desire to execute well-appointed, sporty cabins that don’t break the bank.

Bright red stitching binds the deep-gray shifter boot, steering-wheel wrap and heavily bolstered leather seats and, in the process, ties together the entire cabin in a way that captures the straightforward and purposeful design that punctuates great European interiors.

Hatchbacks have not been wildly popular in the U.S., but the stylish GTI interior, with its flexible folding second row, is bound to give the sector a kick in the pants. Yes, the GTI’s famous plaid seat inserts are available.

Ward’s 10 Best Interiors replaced the Interiors of the Year program after Ward’s Automotive Group took over the Auto Interiors Conference in 2005.

An extensive package profiling the winners will appear on WardsAuto.com later this month and will be featured in the May issue of WardsAuto World digital magazine.