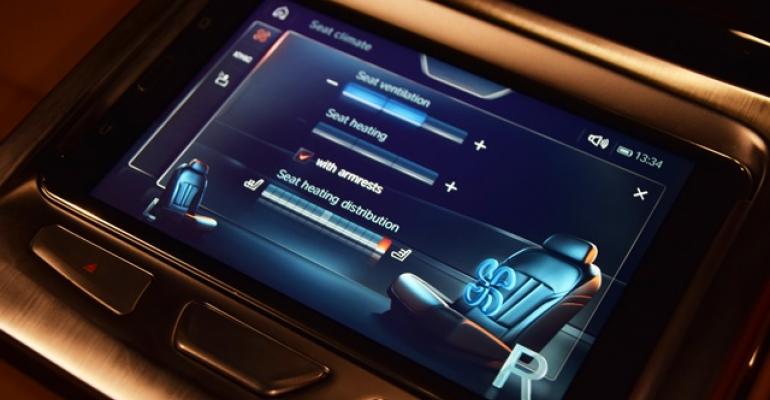 Both a Third World despot and a restless 2-year-old en route to a crosstown play date might agree on the pleasures of being chauffeured around in a BMW 7-Series sedan.

So much for the driver and front passenger. Which of the winners provide the best user experiences behind them?

WardsAuto editors spent hours in second- and third-row seats photographing, testing and just relaxing to select the vehicles that did the best job of extending 10 Best UX characteristics behind the front seats.

One of the favorites is the BMW 7-Series, which should come as no surprise considering it’s the priciest honoree at $128,445. Editor Tom Murphy nails it by labeling one of his photos of the gadget-laden second row Mission Control.

The 7-Series, along with the Chrysler Pacifica and Lexus RX, also won Wards 10 Best Interiors honors earlier this year. Setting UX apart is the vehicle’s ability to entertain – in effect flipping ‟Are we there yet?ˮ to ‟Can we drive around some more? Iʼm almost at Level 12 of Pokemon Go!ˮ

Adjustable and/or heated seats, separate climate controls and easy and accessible connectivity features such as built-in Wi-Fi can be found in other winners. The Pacifica, for example, offers no fewer than seven USB ports.

What they donʼt have is the 7-Seriesʼ detachable personal tablet that allows second-row passengers to – among other things – change radio stations, get a massage and close or open windows, shades and sunroof. The tablet also offers a choice of eight fragrances that can be sprayed throughout the cabin via the HVAC system, presumably with the car’s other occupants signing off.

The Bentley Bentayga also comes with lots of second-row entertainment options and a wireless controller that presents from a dock below the front center armrest. Unlike the larger BMW tablet, the Bentayga’s device is the size of a smartphone.

Both a Third World despot and a restless 2-year-old en route to a crosstown play date might agree on the pleasures of being chauffeured around in a 7-Series with a Wi-Fi hotspot that allows streaming of mobile-device content directly to either of two 10.2-in. (26-cm) entertainment screens, wireless smartphone charging and the option of an exercise routine while seated in back, to keep the blood flowing.

Features in other 10 Best UX winners deserve mention: display screens in the Pacifica; the Honda Ridgeline’s removable rear seat covers made of ‟wetsuit-like material“ for easy cleaning; and, as a group, more leather than what might be found at a rodeo.

WardsAuto also found surprise-and-delight directly behind the seats, but the speakers built into the Ridgeline pickup’s bed got raves from everyone. Another head-turner is a line of hooks behind the Pacifica’s third row, perfect for hanging plastic bags of groceries.

Much of the technology in the 10 Best UX winners presages autonomous driving. Combining it with the best of the behind-the-front-row technology just might bring families, friends and car-poolers closer – at least the ones not watching TV, listening to music, playing video games or striving for Level 13 of Pokemon Go!.