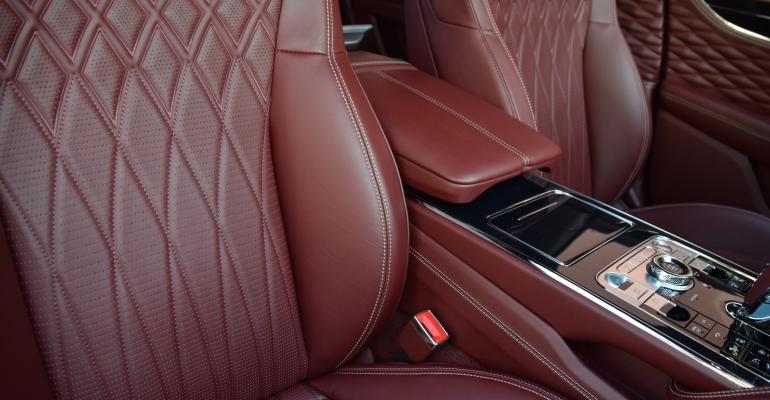 The first impression of a Bentley interior is likely to be breathtaking. But in the all-new Flying Spur flagship sedan, beauty is much more than skin deep. Check out the chrome-plated seat tracks or the artistically designed B-pillars if you need proof.

On this side of the pond, the color of a cricket ball might be unfamiliar for most. It’s a rich, burgundy shade, similar to the color of stitching on an American baseball, oddly enough.

Bentley, a British brand that has oozed top-tier luxury for a century, gives us reason to embrace “cricket ball” as the dominant shade bathing the interior of its all-new Flying Spur flagship sedan, a 2020 Wards 10 Best Interiors winner.

Of course, other hues are available, and deep-pocketed customers surely are plotting their own bespoke color combinations for the 15 pristine cowhides necessary to complete a Flying Spur interior at the automaker’s assembly plant in Crewe, U.K.

“Wow! Stunning color, texture,” writes the generally subdued Dave Zoia, who hasn’t used an exclamation mark this century, on his scoresheet. “All the red was a little much for me, but the two-tone version they showed us in the backgrounder (pictured below) was gorgeous. As much a work of art inside this car as can be done today.”

Studying the craftsmanship of a Bentley interior is a bit like falling into a rabbit hole: One detail draws your attention, then your eye falls on another, then another. Soon an hour has passed and you’re still sitting in the driveway, as if wandering a museum. 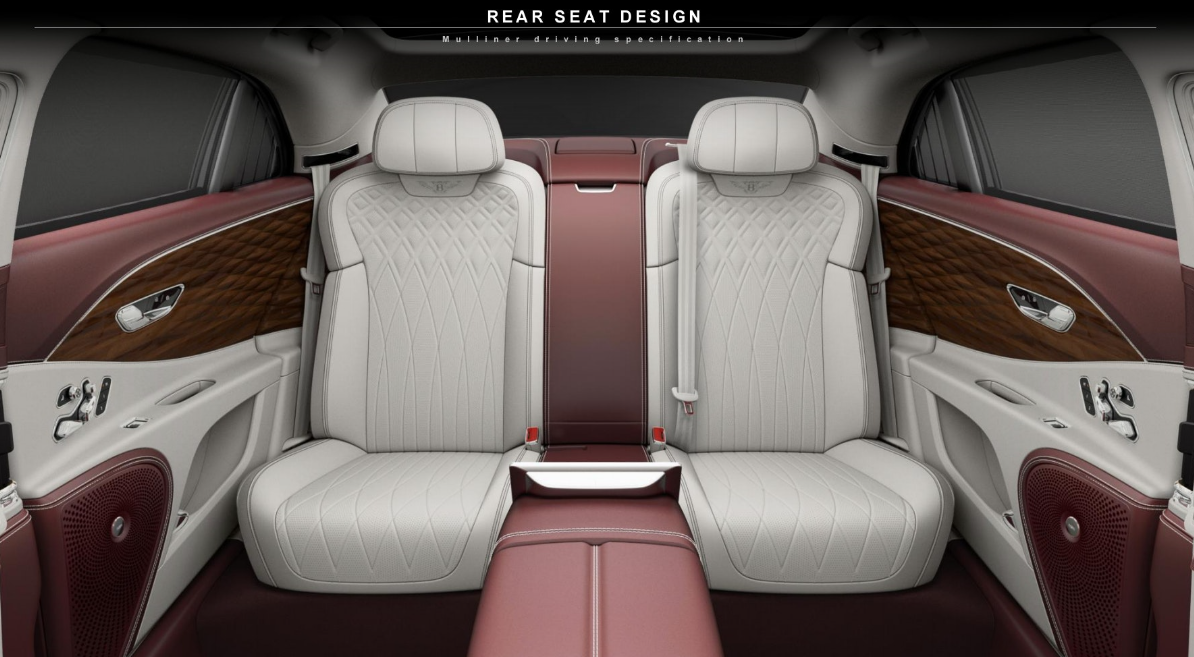 This is Bentley’s third Wards 10 Best Interiors trophy, following the Bentayga in 2017 and the Continental GT coupe last year. The Continental and Flying Spur share an assembly architecture, the steering wheel, much of the instrument panel, digital gauge cluster, certain knurled metallic surfaces, the James Bond rotating display screen and much of the center console.

But there the similarities end. The seats, doors and stitch patterns are different in part because the Continental is a coupe and the Flying Spur a sedan.

The long doors of the Continental allowed designers to extend the trim from the instrument panel toward the B-pillar, creating a more tapered surface that appears stretched and taut – just right for a sporty coupe.

But in the Flying Spur sedan, the front doors are shorter so the trim is less tapered but more luxurious. Both approaches are beautiful. By the way, half of Flying Spur customers are buying the car to be chauffeured, while the other half want to be behind the wheel. 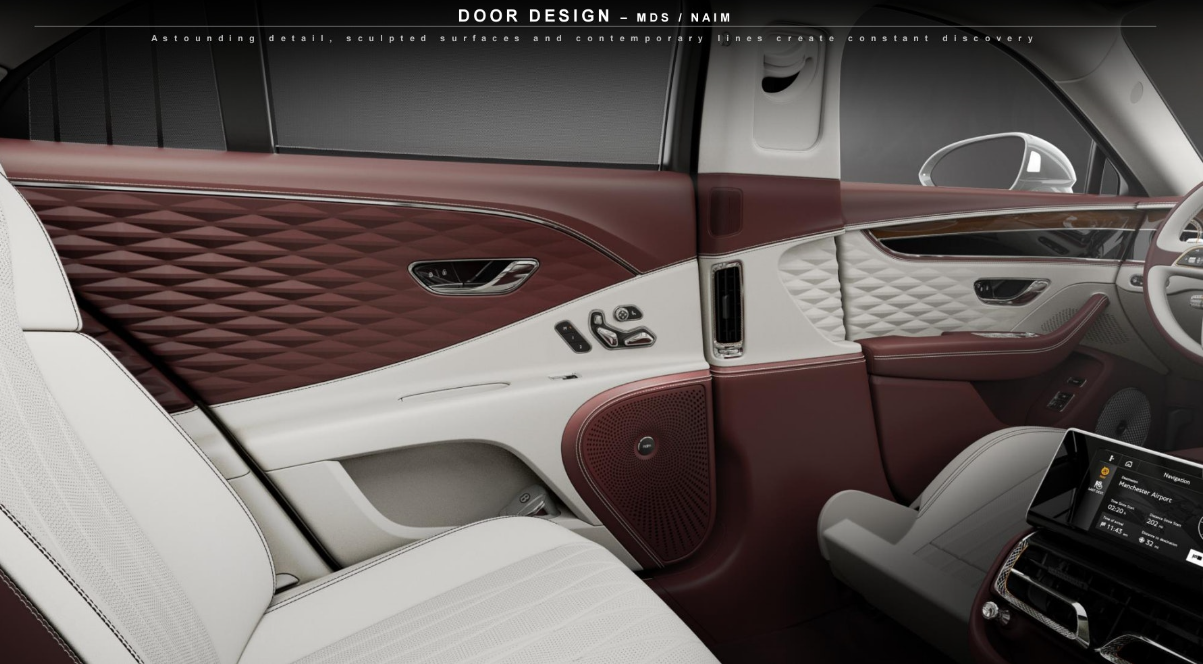 We’re positively geeky over the design team’s treatment of the B-pillar in the Flying Spur – it’s nothing short of remarkable. The main function of a B-pillar in a sedan is to support the roof and provide a structural element to anchor the second-row doors, while providing a surface to secure the closed front doors.

For mainstream brands, the B-pillar barely draws any design attention and generally will be covered with hard plastic because consumers rarely even notice the B-pillar.

But in the Bentley Flying Spur, the B-pillar (pictured above) gets the same meticulous focus as the instrument panel or steering wheel. From floor to headliner, the same top-grade leather on the doors extends to the B-pillar, as does the diamond-shaped 3D-faceted quilting. I’ve never seen anything like it.

Add in impeccable fit-and-finish and the B-pillars are aesthetically breathtaking, even though the large massaging seats block their view.

“The door work front-to-back through the B-pillar and with milled cherry wood as an option is just incredible attention to detail,” Zoia gushes, while noting even the chrome-plated seat tracks that many consumers will rarely see.

Wards 10 Best Interiors judges pore over each nominated vehicle for misaligned seams, wonky stitching, unsightly gaps and poor color matching. In the Flying Spur, there was nary a hair out of place.

Editor Christie Schweinsberg, who casts a critical eye on six-figure interiors, is equally enamored with the myriad textures and shapes, particularly the diamond motif on doors and seats.

“The seat stitching is interesting because the diamonds start out small and double stitched then wind up elongated on the lower seat back and bottom cushions,” she notes. 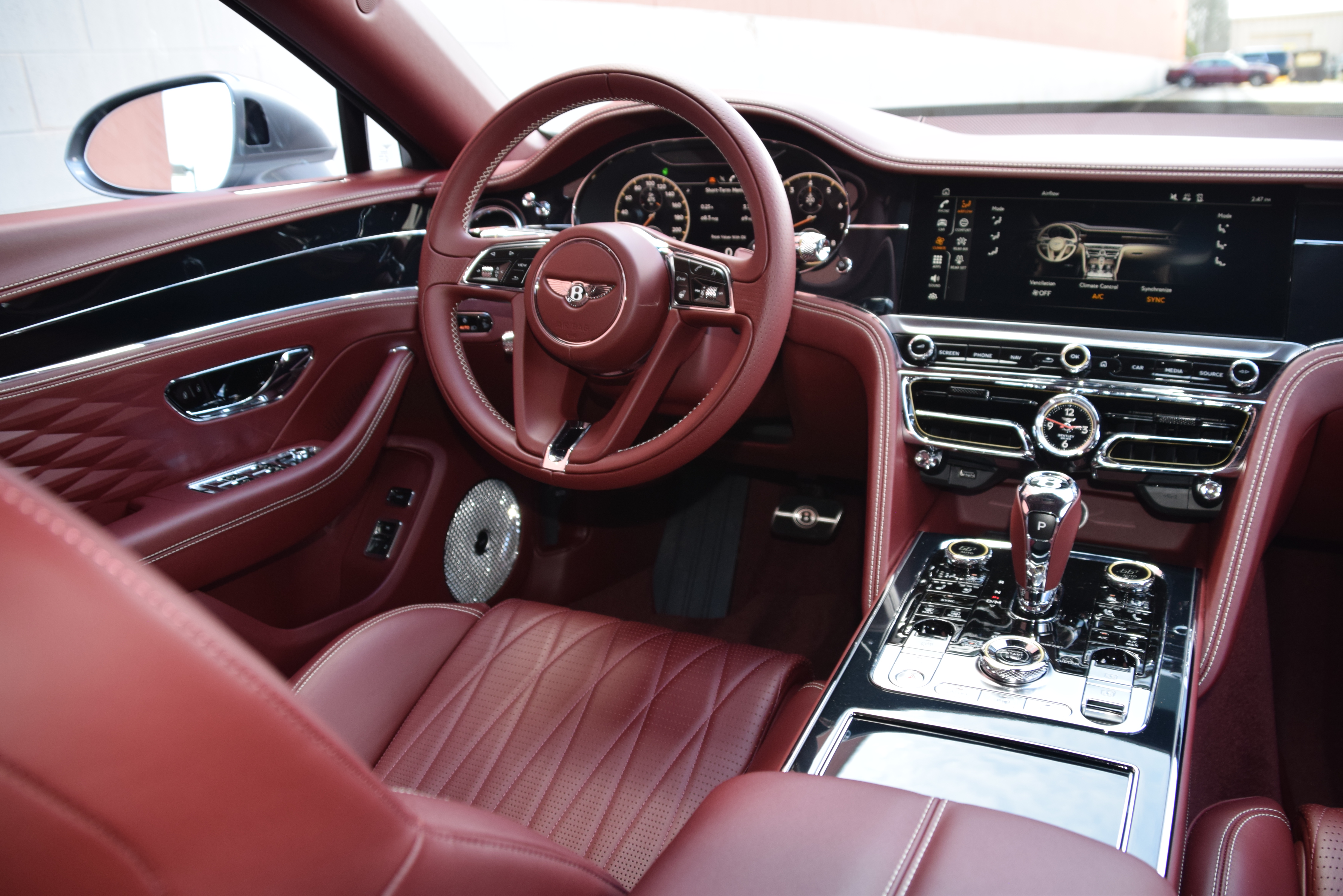 We could talk all day about why it takes weeks to build a Flying Spur, much of it by hand: the inch-thick solid walnut that is hand-finished to a bright sheen; the seats that extend the massaging function to include the shoulders; the second-row remote touchscreen that allows occupants to control comfort and infotainment features, including raising or lowering the “Flying B” hood ornament; the 5,331 metallic “diamonds” that require individual surfacing and polishing as part of the optional knurled bezel around the analog clock on the instrument panel.

The second row is just as lovely as the front, with pillowy head restraints and privacy shades, as well as vanity mirrors that are wrapped in leather and finished in chrome.

The U.S. base price for a Flying Spur is $214,600, and our test model included $44,735 in options associated with the First Edition specification (including Union Jack graphics), as well as an $8,800 Naim audio system. With a $2,100 gas-guzzler tax and other add-ons, our ’20 Flying Spur Ultimate Luxury Grand Touring sedan stickered at $283,275 (pictured above and below).

Budget-minded shoppers will look elsewhere, but those with money to spare have a tough choice between the Continental GT coupe and new Flying Spur sedan.

Brett Boydell, Bentley’s head of interior design, shares an anecdote from a clinic conducted in the U.S. at which potential customers got to experience both cars.

“Some of them said, ‘I can’t decide, so I’ll take both,’” Boydell tells Wards editors. 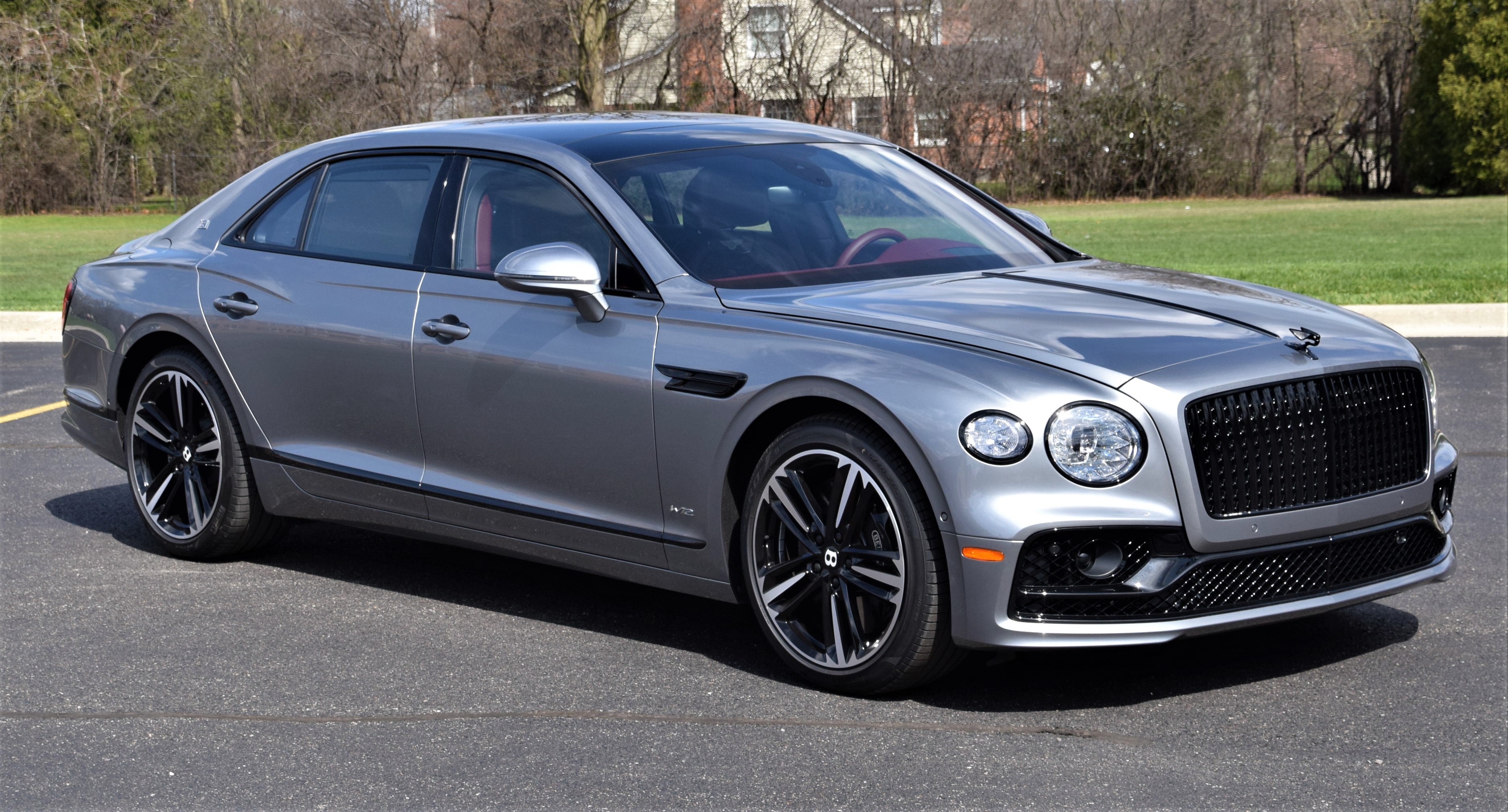