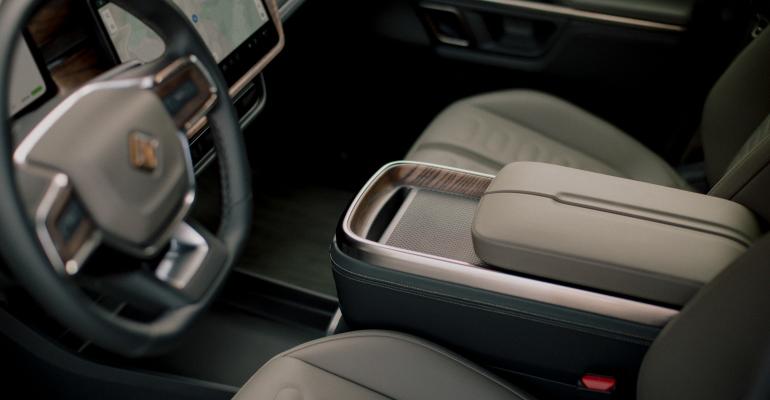 When designers started, there were three choices for an electric pickup truck: Make the interior look like a conventional truck, a spaceship or a Tesla. Rivian chose “none of the above.”

When Rivian was formed way back in 2009, no one was thinking about electric pickup trucks.

By 2013, the interior of the Tesla model S became the template for electric cars: It featured a big central screen and a cabin with few knobs or buttons.

When it came to electric pickups, there were three choices: make the interior look like a conventional truck, a spaceship or a Tesla.

Rivian chose “none of the above.” Instead, it drew inspiration from timeless American mid-century modern designs outside of automotive, such as Frank Lloyd Wright houses and Inge chairs.

“The mid-century modern approach is spot on with today’s design trends in furniture and architecture, so the look is instantly likable,” says judge Dave Zoia.

The R1T cockpit has a modern, yet familiar look, and it doesn’t overwhelm you with technology, but its details, colors and textures scream camping and outdoor adventure. Even the lock/unluck chirp is the sound of a real bird.

“Rivian could have gone all futuristic in creating this truck but this design will have broader appeal. There’s still some interesting modern touches, such as the hidden vents, and the generous displays. I particularly like this truck in the green color trim – very striking and fitting with its out-doorsy theme overall,” Zoia adds.

The big, bold surfaces are easy to clean and made from sustainable materials. A powerful rechargeable flashlight is housed inside the driver’s door. There’s a removable Bluetooth speaker in the center console that will turn any campfire into a party. It has a light on it too.

“Lots of clever features such as USB-C ports hidden on the back of front head restraints above coat hooks,” says judge Christie Schweinsberg.  She also appreciates the daring Chilewich woven floor mats for their cool “marled” look. Stylish marled textiles create visual irregularity and a dynamic surface of moving color. This is the first time this type of material is being used for floormats in a vehicle.

A transverse tunnel behind the cabin – which would be impossible with an ICE platform with a  drive shaft tunnel – offers tons of storage space. It will hold many pairs of skies or an optional electric camp kitchen that slides out sideways for tailgating or grilling in the great outdoors. When folded down, the sturdy tunnel doors become perfect seats for putting on skis or waders.

“I love the tunnel – very innovative, says judge Bob Gritzinger. "As a skier, I love the seats/gear tunnel hatches. They are the right height to put on ski boots (or hiking boots etc.) People who can afford this truck will love it, as will their friends.”

Gritzinger also likes the “Mountain Bluebird” lock/unlock chirp. “Why haven’t others thought of this? So much more pleasant and unique than just another horn honking.”

We once worried EVs were going to be boring. Instead they are proving to be blank slates for great new ideas – especially our 2022 10 Best Interiors & UX winners.