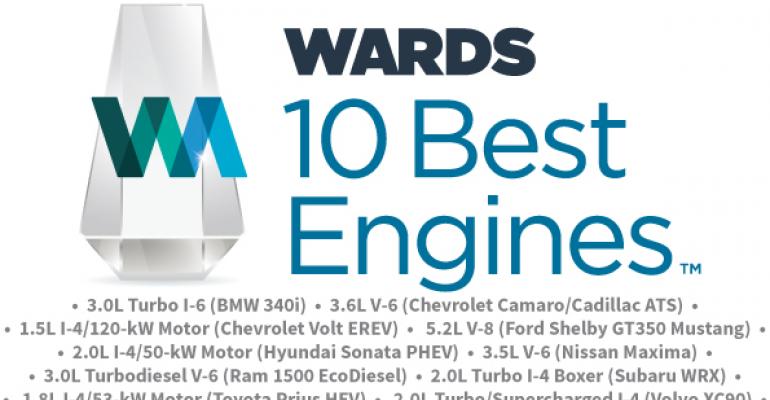 When an editor lobbies for the powertrain that scores dead last in our competition (and shall remain nameless), it speaks volumes about the progressive leaps being achieved in noise attenuation, power delivery and drivability.

You know the powertrain community is firing on all cylinders when the 31 nominees for the 2016 Wards 10 Best Engines include compelling entries representing every commercially available form of propulsion, from fire-breathers, small fuel sippers and diesels to hybrids, a fuel cell and a car that runs on compressed natural gas.

When an editor lobbies for the powertrain that scores dead last in our competition (and shall remain nameless), it speaks volumes about the progress being made in noise attenuation and power density and, in the case of EVs and hybrids, range extension and energy regeneration.

It’s also reassuring to see automakers refusing to surrender in the horsepower war, as Ford’s high-revving 526-hp 5.2L V-8 in the Shelby GT350 Mustang lands like a grenade among naturally aspirated rivals.

If Frank Sinatra were an engineer, surely he would call it a very good year.

Don’t forget this is the first time three hybrids (from General Motors, Hyundai and Toyota) make the list, and they do so convincingly by staring down conventional internal-combustion engines and demonstrating that two heads can be better than one.

The Chevrolet Volt, Hyundai Sonata plug-in hybrid and Toyota Prius make the cut because these three automakers masterfully combine world-class, highly efficient gasoline engines with equally capable electric motors. Consumers would be well served if the auto industry studied these three benchmarks and set out to replicate or even surpass their capabilities.

It’s worth noting these three winners muscled the BMW i3 extended-range electric vehicle out of contention, even though it made our 2015 list and remains a groundbreaking achievement.

Today, WardsAuto.com kicks off an extensive package profiling two winners each day for a week. On Monday, Jan. 11, we will post our “Quick Hits” summaries of our likes and dislikes of all 31 powertrains in this year’s competition.

For 22 years, we have chosen the Wards 10 Best Engines by driving all new or improved engines or propulsion systems available in production vehicles in the U.S. market.

Eight editors conduct evaluations in October and November during their routine commutes in metro Detroit and score them on horsepower, torque, technology, observed fuel economy, relative competitiveness and noise characteristics.

The awards will be presented at a Jan. 13 ceremony in Detroit during the North American International Auto Show.