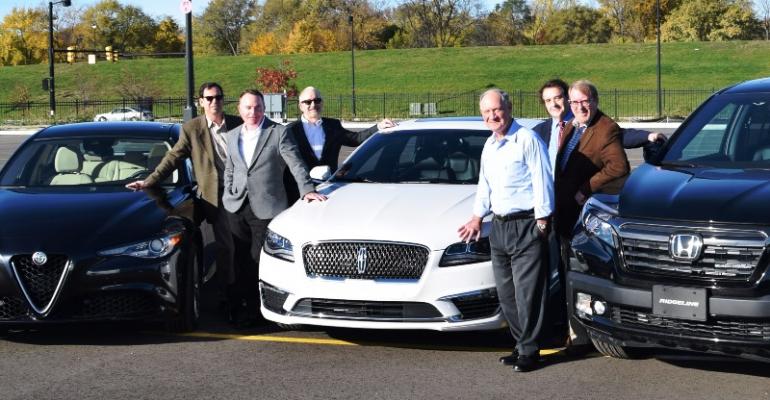 Divergent powertrain strategies are evident as high-output turbocharged engines and fuel-sipping hybrids and plug-ins dominate the field of 40 powertrains under review for the 2017 competition.

Like a country divided over vastly different viewpoints, the 2017 Wards 10 Best Engines field presents a vast chasm of powertrain development, with high-output turbocharged engines on one side and a raft of fuel-sipping hybrids and plug-ins on the other.

Common ground is difficult to find among the 40 powertrains up for our votes when an astounding 23 engines use forced induction and a whopping 11 vehicles hail from the green-car camp, including three full hybrids, seven plug-in hybrids and one all-electric.

The powertrain heartland used to be populated by naturally aspirated, port-injected 4- and 6-cyl. engines, while V-8s have been less desirable for a number of years now.

The downsizing trend clearly is winning by a landslide, as 25 4-cyl. and 12 6-cyl. engines  – most of them employing direct fuel injection and turbochargers to boost performance and efficiency – now dominate the field.

Only two V-8s are in this year’s competition, from Ford and Nissan. One of the new 2.0L 4-cyl. engines, using both turbocharging and supercharging in the Volvo V60 Polestar, delivers a shocking 362 hp, for 181 hp/L, topping the output of some V-8 truck engines more than twice the size.

Don’t get the false impression automakers, emboldened by inexpensive gasoline, are obsessed with overachieving sporty engines for weekend racers while forsaking those consumers cherishing fuel efficiency. If CAFE regulations remain in place through the Trump Admin., automakers will have no choice but to continue rolling out increasingly efficient cars.

Last year’s field of six hybrids or plug-ins has more than doubled this year. And in general they are better than ever, running quieter, smoother and more confidently than those of years past. For the first time ever, we put three hybrids on the list last year, and it’s possible that tally will be achieved again this year, or even surpassed.

Despite what appears to be divergent powertrain strategies by automakers, there are a few vehicles placed squarely in the middle of the road: the BMW 330e and Mercedes C350e, both of them plug-in hybrid sedans that also employ 2.0L turbocharged 4-cyl. engines.

Three years ago, six diesel engines made the Wards 10 Best Engines list, and three made the cut – another first. This year, only three diesels are in the hunt (from Fiat Chrysler Automobiles, General Motors and Jaguar), perhaps a sign of waning interest in the wake of Volkswagen Group’s admission that its diesel engines were rigged to cheat on emissions tests.

Because of the scandal, the VW Group was barred from participating in the 10 Best Engines competition last year. Having taken steps to atone, the automaker’s brands were invited to participate this year. The sole entries are 2.0L turbocharged 4-cyl. engines in the Audi A4 and Porsche 718 Cayman.

This year’s field of 6-cyl. engines is loaded with stout performers, including two well-known award-winning 3.5L V-6s from Honda and Nissan that now employ direct injection, after years of stubbornly sticking with port injection.

Among 6-cyl. gasoline turbos, there isn’t a bad one in the bunch, with two from BMW, two from Ford and one from Infiniti.

The pool of 40 nominees for Wards 10 Best Engines consists of the 2016 winners plus every new or significantly improved powertrain in a vehicle with a base price below $62,000 and available in U.S. showrooms by the first quarter of 2017.

This is the 23rd year for the competition.

Winners will be announced Dec. 12, and trophies will be awarded Jan. 11 at a ceremony during the North American International Auto Show in Detroit.