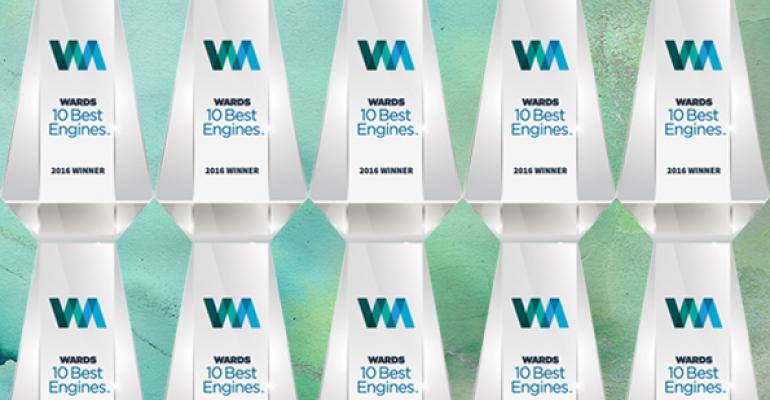 For the first time, three electrics make the Wards 10 Best Engines list. BMW, Fiat Chrysler, Ford, General Motors, Hyundai, Nissan, Subaru, Toyota and Volvo will be honored Jan. 13 at a ceremony in Detroit. GM is the only automaker to win two awards.&nbsp;

Now in its 22nd year, the competition recognizes outstanding engines and electrified propulsion systems, as well as the technology and engineering behind them.

“This is a list that’s loaded with innovation, from hybrids to muscle cars,” says Drew Winter, director-content at WardsAuto. “We have three groundbreaking electrified drivetrains for the first time ever, each representing a different technology: the gas-electric Prius hybrid, the plug-in hybrid Sonata and the extended-range electric Volt.”

WardsAuto editors selected the winners after spending October and November studying and driving all 31 nominees. There is no instrumented testing – only everyday driving to and from home, work, school, the grocery store and grandma’s house.

Editors score each engine based on horsepower, torque, comparative specs, noise attenuation, fuel economy and the application of new technology. The guiding principles: Does the engine or electric propulsion system truly sell the car or raise the bar for its competitive set?

The pool of candidates consists of the 10 winners from last year and the 21 powertrains that are all-new or significantly improved for ’16. Vehicles must have a base price no higher than $61,000 to be eligible. Last year’s price cap was $60,000. Volkswagen Group automakers were barred from participating this year because of its diesel emissions scandal.

BMW remains the most-honored automaker, with 32 Wards 10 Best Engines trophies since the competition began in 1995. The latest comes for the new B58 3.0L turbocharged inline-6 that resides in the 340i sedan and is destined for numerous BMW applications in years to come.

The 320-hp B58 replaces the N55 turbo 3.0L, which earned three trophies from 2011 to 2013. With a larger twin-scroll turbocharger, higher compression ratio and the impeccable balance afforded by an inline layout, BMW proves once again an engine need not make outrageous horsepower or torque numbers to be enormously rewarding and thrilling to drive.

The 340i loves to stretch its legs in the upper reaches of the powerband, which didn’t stop a number of editors from topping 25 mpg (9.4 L/100 km) during our evaluations.

The B58 springs from a new modular architecture that begins with the 6-cyl., then lops off pistons to make 3- and 4-cyl. variants. Those B38 and B48 engines, evaluated in Mini Hardtops in this year’s competition, also impressed the editors, but not quite like the BMW 340i.

General Motors takes home two awards in this year’s competition, giving it 30 trophies over 22 years, making it No.2 behind BMW.

GM’s all-new 3.6L direct-injection V-6 (codename LGX) that powers the Cadillac ATS and all-new Chevrolet Camaro earns its place on the list for demonstrating so clearly that a V-6 no longer should be a consolation prize for a customer who really wants a V-8 but can’t afford one.

Naturally aspirated with 335 hp, the high-compression LGX achieves an impressive specific output of 92 hp/L, all while running on regular unleaded fuel.

And like the BMW engine, this 3.6L has plenty of torque in fifth and sixth gears. No matter the vehicle speed, this all-aluminum V-6 does some of its best work close to the 7,200-rpm redline.

Not to be overlooked are the efficiency enhancements, such as Active Fuel Management cylinder deactivation, which cuts off air and fuel to two cylinders under light loads. We saw fuel economy better than 24 mpg (9.8 L/100 km) in the ATS.

Editors love both applications of this engine, especially knowing it can be had in the Camaro for as little as $30,795.

The all-new second-generation Chevrolet Volt is even more impressive than the first, with a significantly improved 1.5L direct-injection 4-cyl., more powerful batteries and lighter electric drivetrain.

The new Volt has an electric range of 53 miles (85 km), up from 38 (61 km) in the previous car, before the gasoline engine begins providing most of the electricity for propulsion. Either way, the Volt is delightfully quiet and responsive.

Editors praise the new Volt drivetrain for being “really strong in nearly all driving situations,” with “gobs of torque.”

If consumers found anything objectionable in the first Volt, it appears they’ve all been fixed in the second. The base price of $33,995 grows even more attractive with a $7,500 federal tax incentive.

Ford has no trouble muscling its way onto this year’s list with a 526-hp naturally aspirated 5.2L bruiser of a V-8 in the new Shelby GT350 Mustang.

With its heralded flat-plane crankshaft and weight-reducing Plasma Transfer Wire Arc cylinder coating, Ford’s “Voodoo” V-8 casts a spell on WardsAuto editors by demonstrating that a redline of 8,250 rpm is not something to fear but embrace.

Derived from the 5.0L “Coyote” V-8 that won Wards 10 Best Engines trophies in 2011 and 2012, the 5.2L, with old-school port fuel injection, 6-speed manual transmission and using premium fuel, reaches the 100 hp/L threshold, which is extremely difficult for a big engine without forced induction.

Truly suited for hammering around the track, the GT350’s engine is described as “positively demonic” by a Mustang loyalist intoxicated by the brash exhaust note and subtle but soothing shimmy at idle.

The Voodoo engine does everything well, from puttering around town to frightening small animals. WardsAuto editors consider it the pinnacle of internal-combustion engineering.

Equally remarkable at the other end of the spectrum is the Hyundai Sonata plug-in hybrid, which employs an excellent 2.0L 4-cyl. paired with a 50-kW (67-hp) electric motor, which draws energy from a 68-kW lithium-polymer battery.

Plug in the Sonata and bank on at least 27 miles (43 km) of electric range before the direct-injection 2.0L starts the heavy lifting. Charging takes 2.7 hours with 240V or nine hours with a 120V wall socket.

But plan to be pleasantly surprised, like one editor was, when a 30-mile (48-km) commute with a full battery ends with 8 miles (12.8 km) of electric range still in the battery. Thank the software that allows for aggressive regeneration while decelerating and braking.

In real-world situations that included a mix of gasoline and electric driving, WardsAuto editors achieved fuel economy between 41 and 80 mpg (5.7-2.9 L/100 km).

But it’s not just about saving fuel. The high-compression 154-hp 2.0L is the soul of this hybrid and makes it enormously fulfilling and smooth to drive. And don’t forget the $4,500 in various federal tax credits.

This year, it returns with a significant overhaul in time for its launch in the all-new Maxima sedan, carrying over the aluminum block, port fuel injection, compression ratio and bore and stroke.

But 61% of the new VQ’s parts have been redesigned to reduce friction and weight and promote better breathing. The new heads, intake ports and intermediate locking valve timing make for more complete combustion, and a new intake manifold with wider and shorter runners improves airflow.

Like the 3.0L that dazzled us in the Maxima in 1995, the improved VQ makes for light, lively and refined power delivery, and the sterling midrange torque is still there. And we can’t recall ever getting 30 mpg (7.8 L/100 km) from this engine long ago.

Only two engines from last year’s list return for 2016, and one is the 3.0L turbodiesel in the Ram 1500 fullsize pickup. This year’s trophy makes for a three-peat.

Volkswagen may have polluted the diesel waters by rigging emissions, but Fiat Chrysler executives say demand for the Ram 1500 EcoDiesel, with its 420 lb.-ft. (569 Nm) of trailer-ready torque, remains robust.

We understand why. Two other diesels in pickup trucks were evaluated this year, but WardsAuto editors remain convinced FCA’s Italian-built 3.0L V-6 remains the gold standard for refinement and fuel efficiency in the world of light-duty trucks. Hitch a sizable trailer on the back, and this engine barely breaks a sweat.

One editor writes on his scoresheet: “Ram engineers have done such a stellar job of integrating this powertrain that most people wouldn’t guess there’s a diesel under the hood.”

The other returning winner is the 2.0L turbocharged 4-cyl. boxer that turns the Subaru WRX into a riotous weekend racer or a docile suburban cruiser.

Producing 268 hp and 258 lb.-ft. (350 Nm) of torque, this direct-injection “FA” boxer has become the poster child for high-output, affordable turbocharged 4s. Last year, it managed to float to the top of our list among a sea of 15 4-cyl. turbos, many of them quite good.

This year, there were eight 4-cyl. turbos, and the WRX capitalized on that mathematical advantage, with its low weight, twin-scroll turbocharger and palatable $28,895 base price, with Premium trim.

The FA boxer makes the WRX fast, fun and spirited, while being perfectly suitable for daily driving. This is a great engine that completes the package: a reasonably priced practical sports car with a rally racing heritage.

Oh what fun it is to ride in a high-strung Subaru.

Toyota won Wards 10 Best Engines trophies for its groundbreaking Prius hybrid in 2001, 2004 and 2010, and the automaker returns to the podium with its fourth-generation Prius.

With an all-new 95-hp 1.8L 4-cyl. paired with two electric motors pumping another 53 kW (71 hp) of juice from batteries stored in the rear, the new Prius delivers seamless acceleration and real-world fuel economy during our evaluations of up to 61 mpg (3.8 L/100 km).

There’s a lot of new technology onboard, such as the cooled exhaust-gas recirculation used for the first time on a Prius to improve fuel economy and emissions. It’s quieter and silkier than the old Prius, and a “Power” button provides a noticeable kick on freeway entrance ramps.

With an attractive as-tested price of $24,700, the Prius is the least-expensive vehicle on our list, while selling at the highest volume. “The benchmark for hybrid-electric vehicles is setting a new benchmark,” writes editor Winter on his scoresheet.

Last January, Volvo’s Michael Fleiss collected a trophy for the 2.0L T5 turbocharged 4-cyl. in the S60 sedan and told a WardsAuto editor he would be back in January 2016 when the more powerful 2.0L T6 engine wins an award as well. It was a gutsy statement.

But a year later, after our editors have driven the new XC90 and routinely got better than 24 miles per gallon in a big 7-passenger CUV with all-wheel drive, the WardsAuto staff now is equally enthusiastic about this all-aluminum engine rated at 316 hp and 295 lb.-ft. (400 Nm) of torque.

Did we mention that only four pumping pistons are providing all the motivation necessary to effortlessly drive this 3-row peoplemover?

Editors praise the XC90 for having the composure, power and refinement of a high-feature V-6. The T6 arguably is the new benchmark for high-output 4-cyl. engines.

Setting this direct-injection powerplant apart from other small engines employing forced induction is the pairing of supercharging to provide immediate punch with turbocharging to carry on at higher rpm.

One editor writes on his scoresheet: “Skip the debate and give the Swedes another award.”

The winning automakers will be honored Jan. 13 at a WardsAuto ceremony Jan. 13 in Detroit during the North American International Auto Show.

Please visit WardsAuto.com in the coming weeks, as well as the January issue of WardsAuto digital magazine, for additional commentary, profiles of the winning engines, videos and more information about the 2016 Wards 10 Best Engines.