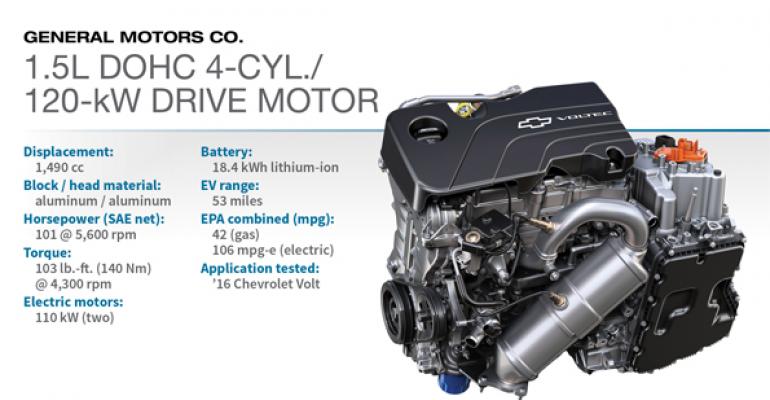 The Voltec propulsion system already was one of the most innovative powertrains ever mass produced. Now GM has made it significantly better in every way. There was no way we could not put it on the list this year.&nbsp; &nbsp;

Chevy Volt owners are an environmentally conscious group. But considering the first-generation car already allowed them to avoid gas stations for months at a time, a key request for the second-generation was that it be more fun to drive. General Motors engineers were happy to comply.

They redesigned the drivetrain so both the Volt’s electric motors operate together in more situations during electric and extended-range operation. The ability to run the two motors simultaneously improves 0-30 mph (48 km/h) acceleration 19% and 0-60 mph (97 km/h) 7% to 8.4 seconds.

While 8.4 seconds is not going to win a lot of drag races, having 294-lb. ft. (399 Nm) of torque available almost instantaneously definitely puts a smile on your face.

The more-fun-to-drive aspect is but one of many dramatic improvements immediately noticeable in the ’16 Volt because the entire propulsion system is redone.

Electric range is extended to an EPA-certified 53 miles (85 km) from 38 miles (61 km) even though the number of individual cells in the battery pack is decreased from 288 to 192 as the result of modified chemistry. And, the cells now are positioned lower in the pack for a lower center of gravity. Overall battery mass is reduced 21 lbs. (9.8 kg).

Editor Christie Schweinsberg, a long-time Volt owner, notes significant NVH improvements on her scoresheet but also is impressed with the EREV’s enhanced ability to capture kinetic energy and put it back in the battery. “Great regen,” she enthuses. “I spent 16 miles (26 km) of battery range but went 19 miles (31 km).” Schweinsberg also is thrilled the engine no longer requires premium.

The new direct-injection 1.5L 4-cyl. range-extender is slightly larger than the previous 1.4L, but it is substantially more powerful and spins slower to provide better NVH and improved efficiency.

The transition from battery to generator mode when the battery runs out of juice is almost impossible to detect. Engine noise in the previous Volt was well muffled but still could get a bit loud at times. The drive unit also weighs 100 lbs. (45 kg) less than the previous system.

The Voltec propulsion system already was one of the most innovative powertrains ever mass produced. Now GM has made it significantly better in every way. There was no way we could not put it on the list this year.