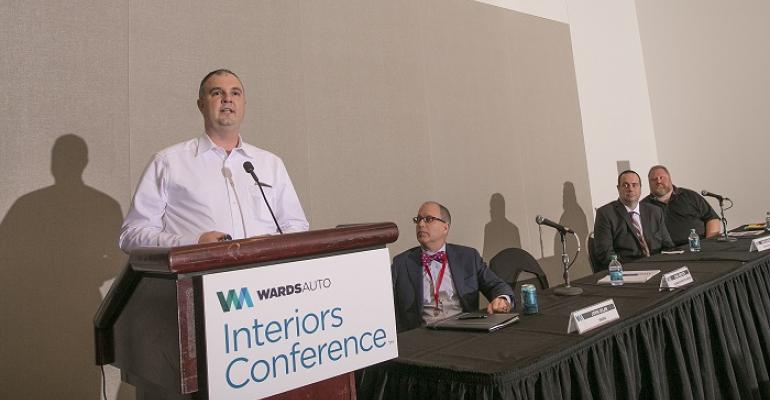 DETROIT – It may seem as if vehicle seats can’t get any more plush, configurable, stylish or comfortable.

But automakers and suppliers, speaking at the “New Ideas in Seating” panel at the 2017 WardsAuto Interiors Conference here, say there still is much progress to be made.

Honda already is well on its way to achieving that, as Lindsay details the automaker’s new Magic Slide seat, in the ’18 Odyssey minivan launching later this month.

Magic Slide allows the second-row seats in the Odyssey to move laterally as well as fore-and-aft, creating a wide path for those entering and exiting the third row and putting small children within closer reach of their parents.

“When we were doing conceptualization for the product early on…one thing we all bemoaned is when you put a child seat in the middle-row seats you really defeat the ingress/egress for the third row, especially if it’s a rear-facing child seat,” Lindsay says of the inspiration for lateral-sliding seats.

The Odyssey’s second-row seats can move a maximum 12.9 ins. (328 mm) inward so long as the middle seat is removed, Lindsay says. Seats can be positioned, via a seat-mounted pull mechanism, at five slide-lock increments, separated by four 3.2-in. (82-mm) increments, along lateral rails in the floor.

A challenge Honda faced in developing the seats was shoulder-belt slippage when a seat was pushed inward, as well as blocked access to the third row by a stretched belt coming out of the C-pillar. The automaker solved this by integrating a 3-point seatbelt into the seats.

Lindsay refuses to say whether Honda sees further application across its lineup for Magic Slide, for which it has applied for 12 patents.

Panelists envision additional new abilities for seats, such as driver wellness monitoring via heart-rate or respiration sensors and greater flexibility to enhance driver comfort in semi-autonomous vehicles when the car is fully in control.

“What are people going to do when they’re not focused on driving?” asks Adient’s Nick Petouhoff, executive director-advanced product development. He encourages OEMs and suppliers to think big, noting early vehicles were nothing more than a horseless carriage.

“They didn’t make a car for several decades…they didn’t imagine enough,” he says. “So I caution all of us to think differently. Let’s not just make long rails and swivel seats. We don’t need giant wheels. We can make them smaller.”

Due to an expected shift from driver-centric seats to rider-centric seats, Adient unveiled at January’s Detroit auto show concept seats designed for Level 3 or 4 autonomous driving, with a base that can rotate up to 70 degrees outward for easy exit and entry, and 15 degrees inward for conversation with occupants. Rear seats also recline 45 degrees for relaxation.

He says driver wellness is an intriguing growth area for seating, as well, but warns biometric monitoring is fraught with danger.

“What do you do with the data?” he says, noting legal departments at OEMs and suppliers are debating that question now. There also are some challenges with clothing that biometric seat sensors may not be able to penetrate.

Emil Kreycik, of Adient subsidiary Recaro, says in an autonomous future a seat “has to do more for us.” He foresees seats needing to warn autonomous-vehicle occupants of an impending crash someday.

“You don’t realize how much as a passenger today you are preparing for an event, because you’re screening emotion off the person trying to prevent (a collision) from happening,” he says.

Kreycik says in the near-term Recaro is developing seat concepts for light trucks that optimize bolstering and stabilize the body, and concepts for premium sports cars that have pneumatic-slide bolster adjustments and power-operated extending seat cushions without gaps. Slimmer seat backs also are in the cards as a way to maximize space and reduce weight.

“In the last 10 years, the momentum behind perfect seats, every time, no matter how many you make, has been insane, and it’s really put a lot of stress on the materials industry, and also the seat-trim and sewing industry.”