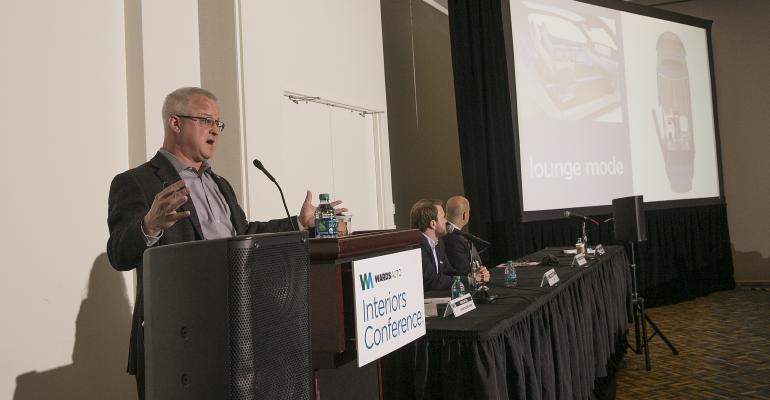 Designers: Consumers Must Be Guided Through Autonomy’s Stages

With five technology levels to go through before vehicles drive themselves 100% of the time, riders will need to know exactly what a semi-autonomous car is capable of when they climb in, interior designers say.

DETROIT – Developing cars that drive themselves is the easy part. Making passengers comfortable with them is the challenge, interior designers say as the industry marches toward delivering fully autonomous vehicles into consumer hands in the 2025-2030 timeframe.

“Just Google images of people riding in an autonomous vehicle,” Carter Cannon, manager-Functional Integration for interior supplier IAC Group, says noting most look uncomfortable and ready to take control at a moment’s notice. “They all have their hands just inches from the steering wheel.”

Passengers will need to know exactly what the car is seeing and what it is about to do, if they are to completely trust the technology, he tells a session on Autonomous Interiors 2.0 at the WardsAuto Interiors Conference here, but notes it’s a delicate balancing act for designers.

“Too much information causes (even) more stress.”

The first problem automobile designers need to tackle, says Nina Mital, partner at design consultancy PocketSquare, is how to signal the car’s level of self-driving capability to a consumer getting behind the wheel for the first time.

She points to the commonly referenced six stages of autonomous technology that run from Level 0 (no automation) to Level 5 (full-time self-driving), noting even today’s most advanced cars, such as Tesla’s Model S, are only at Level 2.

That means there is room for a lot of consumer confusion as autonomous technology advances to Levels 3, 4 and 5, she says.

“As a customer, how do I know where my vehicle falls?” Mital asks. “Levels 2-4 really require us (as manufacturers) to help customers understand.”

Cannon says part of the solution will be common standards and operating modes for all Level 3-4 autonomous vehicles, no matter model or brand, that clearly communicate when it is time for the driver to take control.

He suggests lighting and haptics could help guide the occupant through that transition, with a tone alert and green lighting to signal full-autonomous mode, a sound and yellow light to warn the car is about to turn control over to the driver and a tone and red light once driver control is required or the car is about to coast to a safe stop.

Designers say in addition to warming up consumers, automakers and suppliers will have to become acclimated to a new business model.

“If you’re not paying attention to how people spend their money, you’re in the wrong business,” says Dave Muyres, executive director-Research and Advanced Development for interior supplier Yanfeng. “The industry will move to a mobility services (model) – a new way to make money.”

Stefan Weissert, director-Car Multimedia Div. for Bosch, agrees, suggesting cars and trucks simply will evolve into platforms designed to produce a specific desired consumer experience. For example, the industry could transition to more of an airline business model, he predicts, as drivers become passengers and vehicle ownership gives way to ride hailing and car sharing.

That movement even could affect car branding, he suggests, pointing to potential for partnerships between automakers and other industries that might provide travelers with autonomous-vehicle access as part of an airline-ticket purchase or hotel stay.

Vehicle designers need to take note of this evolution to a new-mobility model, if they are to attract and retain customers in the future, Muyres says.

“It used to be (vehicles) had to look sexy and exciting,” he says. “That’s still important, but (more and more) people will spend their money based on their experience in that 20-minute journey.”