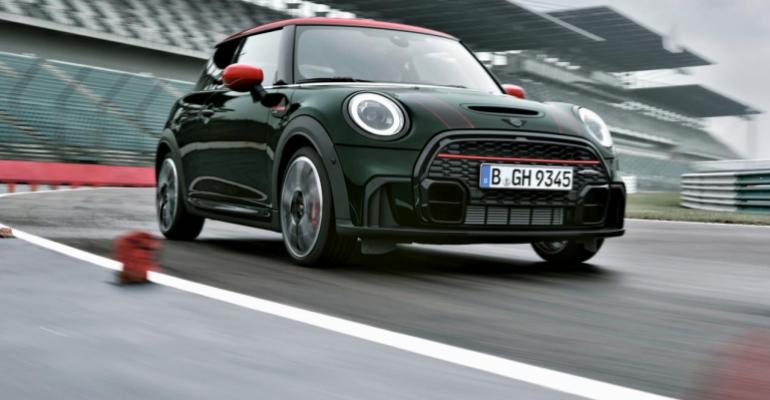 Three of Mini’s Five Models Get New Look for ’22

To improve safety for all its models, Mini is including its Driving Assistant system as standard. That includes lane departure warnings, adaptive cruise control, automatic emergency braking and more.

The Mini Cooper is one of the most iconic and recognizable cars on the road, but even it has to be updated to keep up with the times.

The BMW-owned automaker is doing just that for the 2022 model year and is announcing a slew of changes for 60% of its model line. While the changes won’t add up to a complete overhaul of the plucky little cars, Mini says 2022 will be the first time it updates three of its five models at the same time.

Out front, both hardtop and convertible models will feature air curtains on their front bumper and will not come with fog lights, which Mini says is meant to clean up the front end and enhance aerodynamics. The new grille extends down toward the road with the safety bar hidden under a body panel for a sleeker look.

A handful of new colors will join the Mini lineup for 2022. They include Island Blue, Rooftop Grey and Zesty Yellow. Hardtop models also will be available with a multitone roof, which is a color gradient of Soul Blue, Pearly Aqua and Jet Black with black mirror caps. Elsewhere, LED headlights will be standard, as will Union Jack LED taillights.

Buyers can continue to choose between a standard 6-speed manual or optional 6-speed automatic gearbox.

Inside, Mini says it focused on improving the infotainment and digitalization of its cars. The center stack will include an 8.8-in. (22-cm) digital display, which will feature configurable live widgets and two different color schemes. Mini says SiriusXM radio will be standard for all models, and a new ambient lighting system will be available with six colors to choose from.

To improve safety for all its models, Mini is including its Driving Assistant system as standard. That includes lane departure warnings, adaptive cruise control, automatic emergency braking and more.

Mini is underscoring its pricing, and for good reason. Gas-powered hardtop and convertible prices will increase only $500 across most trims.

The Cooper SE will see its pricing stay flat for the new model year. The base Mini Cooper Hardtop will start at $23,750 after an $850 destination charge. The Cooper Convertible starts at $27,750, and the Cooper SE starts at $30,750. The John Cooper Works model starts at $33,750, and 4-door models of all hardtop cars will cost $1,000 more than their 2-door counterparts.