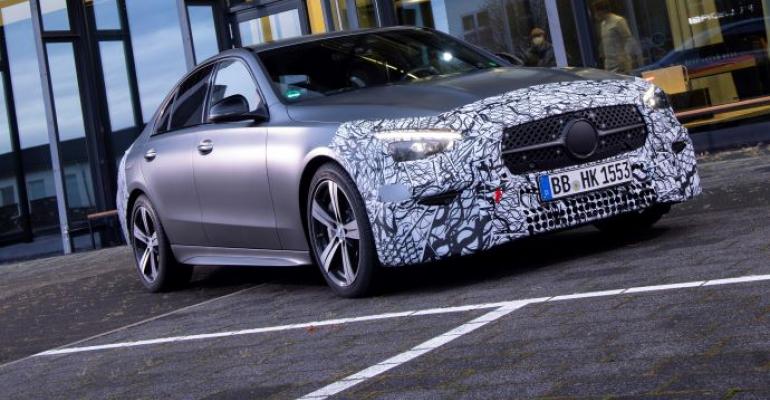 Given the success of the outgoing fourth-generation C-Class on sale in the U.S. since 2014, Mercedes-Benz was never going to stray too far away from it when developing its successor.

Earlier this month, Mercedes-Benz offered Wards an opportunity to learn more about the new fifth-generation C-Class sedan before it reaches North American showrooms later this year.

The head of C-Class development, Christian Früh, invited us to ride along in a pre-production prototype during final validation testing on roads close to the German automaker’s headquarters in Stuttgart, Germany, where a lot of the new model’s development has taken place.

Given the success of the outgoing fourth-generation model on sale in the U.S. since 2014, Mercedes-Benz was never going to stray too far away from it when developing its successor, the W206 as it is codenamed.

The C-Class resides in the Lower Luxury car segment tracked by Wards Intelligence. Virtually every car in the segment was down significantly in 2020 vs. 2019. Last year, C-Class deliveries totaled 26,295 units in the U.S., well behind the BMW 3-Series, Lexus ES and all-electric Tesla Model 3 sedans.

The visual similarities between the old and new C-Class are abundantly clear when we see the ’22 model for the first time. The proportions emphasize the classic rear-wheel-drive mechanical layout, while the overall design, with full surfacing treatment, is instantly familiar.

The larger dimensions help further distinguish the C-Class from the A-Class sedan and CLA while ensuring it keeps pace with the Audi A4 and BMW 3-Series in terms of size.

It’s clear Mercedes-Benz has taken inspiration from the new fullsize S-Class sedan in crafting the interior, which is dominated by a digital instrument display and large central touchscreen together with four central air vents.

The digital functions, including an optional head-up display featuring augmented reality functions, are controlled by the latest evolution of Mercedes-Benz’s MBUX operating system, which supports over-the-air software update capability for the first time in the C-Class.

Not surprisingly, it’s roomier, too. “The packaging has been improved,” says Früh. “There’s an added 0.9 in. (23 mm) of front elbow room. The increased length also gives us an additional 1.4 ins. (36 mm) of rear-seat legroom, so there’s greater comfort.”

The fifth-generation C-Class is essentially new underneath. It sits on Mercedes-Benz’s Modular Rear Architecture platform, the same structure used by the new S-Class. Unlike its aluminum-intensive upmarket sedan sibling, it uses a much higher percentage of steel.

There’s also a completely new electrical architecture, with 48V functionality across the range.

Details of North American models are yet to be finalized, though all of the 4-cyl. gasoline and diesel engines to be offered in the new C-Class in Europe now come with mild-hybrid properties. You’ll search in vain for a 6-cyl., though, as the new inline units used by other Mercedes-Benz models would have necessitated a significant lengthening of the engine bay and front overhang, according to Früh.

The C300 4Matic model here mates a turbocharged 2.0L 4-cyl. with a gearbox-mounted integrated starter generator developing 255 hp and 20 hp, respectively. It also features an overboost function that liberates an extra 27 hp for up to 30 seconds under full-throttle acceleration.

The big news for European markets, however, surrounds two new C-Class plug-in hybrid models – the gasoline-electric C300e and diesel-electric C300de. With a gearbox-mounted electric motor and larger capacity battery than that used in outgoing PHEV C-Class models at 25.4 kWh, they both promise an electric range of over 62 miles (100 km) on the WLTP test cycle.

And the AMG models? Mercedes-Benz doesn’t want to talk about them yet, but the successor models to both the C43 4Matic and C63 4Matic likely will receive a 4-cyl. engine – in the latter case combined to a new PHEV system that places an electric motor within the rear axle instead of within the gearbox.

The C300 4Matic is not the most powerful of the new C-Class models, but its newly configured mild-hybrid drivetrain endows it with a good deal of performance, with strong accelerative qualities accompanied by a typical 4-cyl. thrum at middling-to-high revs in lower gears.

A good part of the new C-Class’s development has been concentrated on enhancing its overall refinement. It’s an improvement on the old model in this respect, with reduced vibration from the engine and aerodynamic enhancements that give it a drag coefficient of 0.24 and remarkably low levels of wind buffeting.

Most of the time it is the ability of the new C-Class to simply glide along in a relaxed state that gets my attention. And on this front, Mercedes-Benz appears to have succeeded in imbuing the new model with the sort of qualities North American buyers will expect. 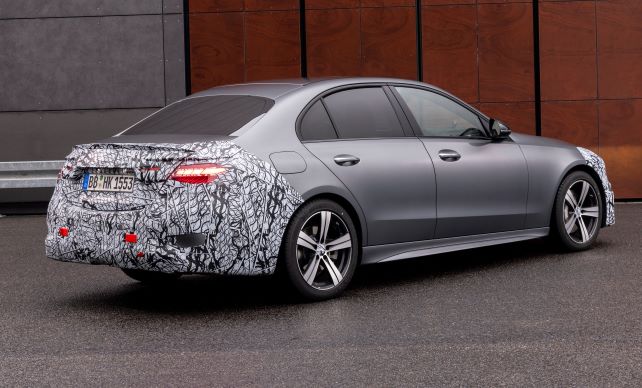