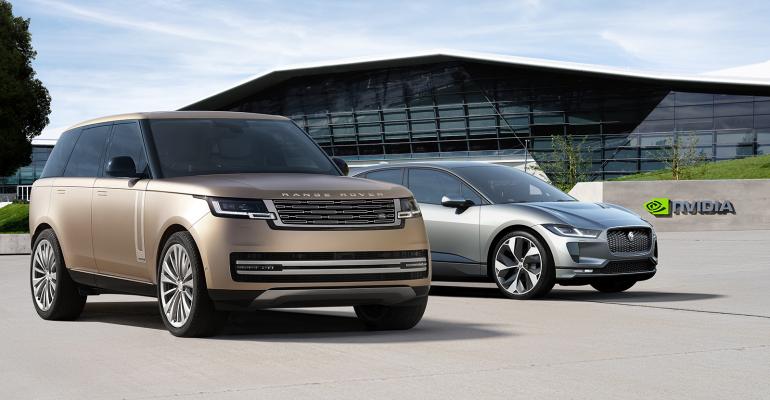 The partners say all new JLR vehicle platforms will deploy the full DRIVE technology beginning with 2025.

Jaguar Land Rover accelerates its transition to the software-defined vehicle, announcing a multi-year partnership with chipmaker and software developer NVIDIA to use its full stack NVIDIA DRIVE Hyperion 8 technology on all new vehicles beginning in 2025.

The deal is part of JLR’s Reimagine strategy to produce a new generation of connected, smart and sustainable vehicles.

The NVIDIA software/hardware platform will enable JLR to deploy automated driving and parking technology, as well as next-generation advanced driver-assistance features, in its next generation of vehicles. Inside the new Jaguar and Land Rovers, the system will deliver artificial-intelligence-driven features, including driver and occupant monitoring and augmented reality.

The partners say all new JLR vehicle platforms will deploy the full DRIVE technology beginning with 2025, and all will have the identical full suite of sensors to allow the advanced driving features to be deployed, if customers opt in at purchase or any time during ownership.

The platform will enable Level 2-plus assisted driving and Level 3 automated driving features, plus self-parking. As all vehicles starting in 2025 will be software-defined, full connectivity enables software to be updated over the air, meaning capabilities can advance as new technology is released.

It is unclear how long it will take JLR to transform its entire lineup to the new electronics architecture. NVIDIA says costs of the system should come down as more models roll out to the market. Utilizing the identical electronics backbone also will allow JLR to reduce engineering effort and manufacturing complexity. The companies say future JLR vehicles will be developed end-to-end together using NVIDIA’s AI design, engineering and testing tools.

“Our long-term strategic partnership with NVIDIA will unlock a world of potential for our future vehicles as the business continues its transformation into a truly global, digital powerhouse,” JLR CEO Thierry Bolloré says.

JLR is not the only automaker leaning on NVIDIA’s DRIVE platform for its central software platform. Mercedes also will use the technology, and several other automakers are working with the supplier to use either all or parts of NVIDIA’s technology. NVIDIA says although automakers may share the underlying architecture, they will be able to differentiate their vehicles with brand-specific looks and features.