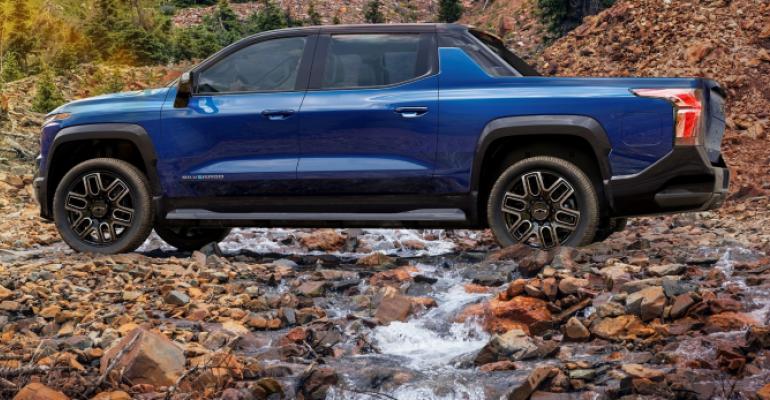 General Motors will launch two versions of the Silverado EV next year: an RST trim priced over $100,000 and a fleet-focused WT at $39,900. Range is estimated at 400 miles, a clever Avalanche-like mid-gate will come standard on RST, and initial tow rating is pegged at up to 10,000 lbs.

WARREN, MI – Pickup truck shoppers leaning toward environmental sustainability will have battery-electric options, starting with the Ford F-150 Lightning coming this spring, followed a year later by the ’24 Chevrolet Silverado EV. A fully electric Ram 1500 is due in 2024.

For General Motors, the Silverado EV represents an all-in bet that Americans are ready to plug in to a future without gas stations or internal-combustion engines. That vision won’t materialize overnight and will require a massive consumer shift, but Tesla and other EV startups have demonstrated that demand for battery-electric vehicles is real.

The Detroit automaker had intended to unveil the truck today at CES in Las Vegas, but growing concerns about COVID-19 and its variants forced GM to switch to an all-digital reveal.

Beginning today, GM is accepting reservations in the form of a $100 deposit for a fully loaded RST First Edition, priced at $105,000, plus destination charges. These trucks, with an estimated range of 400 miles (644 km), are slated for customer delivery in fall 2023 in the U.S. and Canada.

But before those high-end RST units come out, the ’24 Silverado EV WT (“work truck” pictured above, left) targeting fleets will go on sale in spring 2023. GM isn't disclosing pricing for these initial fleet vehicles. But later in 2023, lower-priced versions starting at $39,900, plus destination charges, will be available, the automaker says.

All versions of the Silverado EV as well as the GMC Sierra EV will be assembled at the newly retooled Factory Zero, GM’s Detroit assembly plant on the Hamtramck border that opened in 1985 and was slated for closure until the BEV work came along.

The Sierra EV, launching only in upscale Denali trim, will be revealed later this year. The Sierra, Silverado, GMC Hummer and Cadillac Lyriq all spring from GM’s modular high-voltage Ultium battery architecture.

Select media (including Wards) got to see the Silverado EV in person last month (in loaded RST trim) at a studio here near the GM Tech Center and speak with engineers and executives about the pending launch.

At first glance, the Silverado EV looks very unconventional: The hood is short, as are the front and rear overhangs, the cab is massive, the bed appears small (5-ft.-11 [180 cm]) and the sails connecting the rear of the cab to the front of the bed provide a stylistic reminder of the Chevy Avalanche, which left the market in 2013.

The Silverado EV looks smaller than its ICE counterpart, but in reality the Silverado EV is 1 in. (25 mm) longer than a current Silverado, and sits 1 in. lower as well. The EV’s wheelbase is 1 in. shorter than the ICE truck. 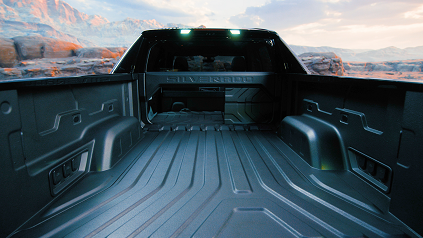 The cab is designed for maximum passenger and cargo space, as is evident in the massive rear doors that suggest a limousine experience for second-row occupants.

But that extra space in the back seat isn’t just for passengers: Like the Avalanche, the loaded RST version of the Silverado EV will come with a Multi-Flex Midgate (pictured above, left) that folds and stows, allowing an object up to 9 ft. (274 cm) long to stow in the bed with the tailgate up. The second-row seats fold in a 60/40 configuration, allowing for both a kayak and passenger.

The bed is made of steel, then covered with a spray-in liner, and the hood and doors are made of steel as well.

The entire structure of the truck is dictated by GM’s flexible Ultium battery architecture. GM engineers describe the Silverado EV as neither body-on-frame nor unibody but a hybrid of sorts.

The chassis structure is similar to that of the Hummer, but GMC’s off-road brute employs a different cradle at the rear to accommodate repackaged motors. The Hummer will have three motors, while the Silverado EV will have two – one front and one rear – with eAWD as standard.

GM has not yet confirmed whether rear-wheel-drive versions of the battery-electric pickups will be available later on.

The Silverado EV has standard fast-charging capabilities of up to 350 kW, enabling an estimated 100 miles (160 km) of range in 10 minutes on public DC fast chargers.

Up to 10 on-board outlets will provide a total of 10.2 kW of juice for camping or job sites, and an available accessory cord can be used to charge another EV.

Initially, RST models will come standard with the Super Cruise driver-assistance technology with trailering, as well as 4-wheel steering, which makes for a tighter turning circle and easier maneuverability.

The Silverado EV offer 7 gallons (26 L) of storage space under the center armrest. 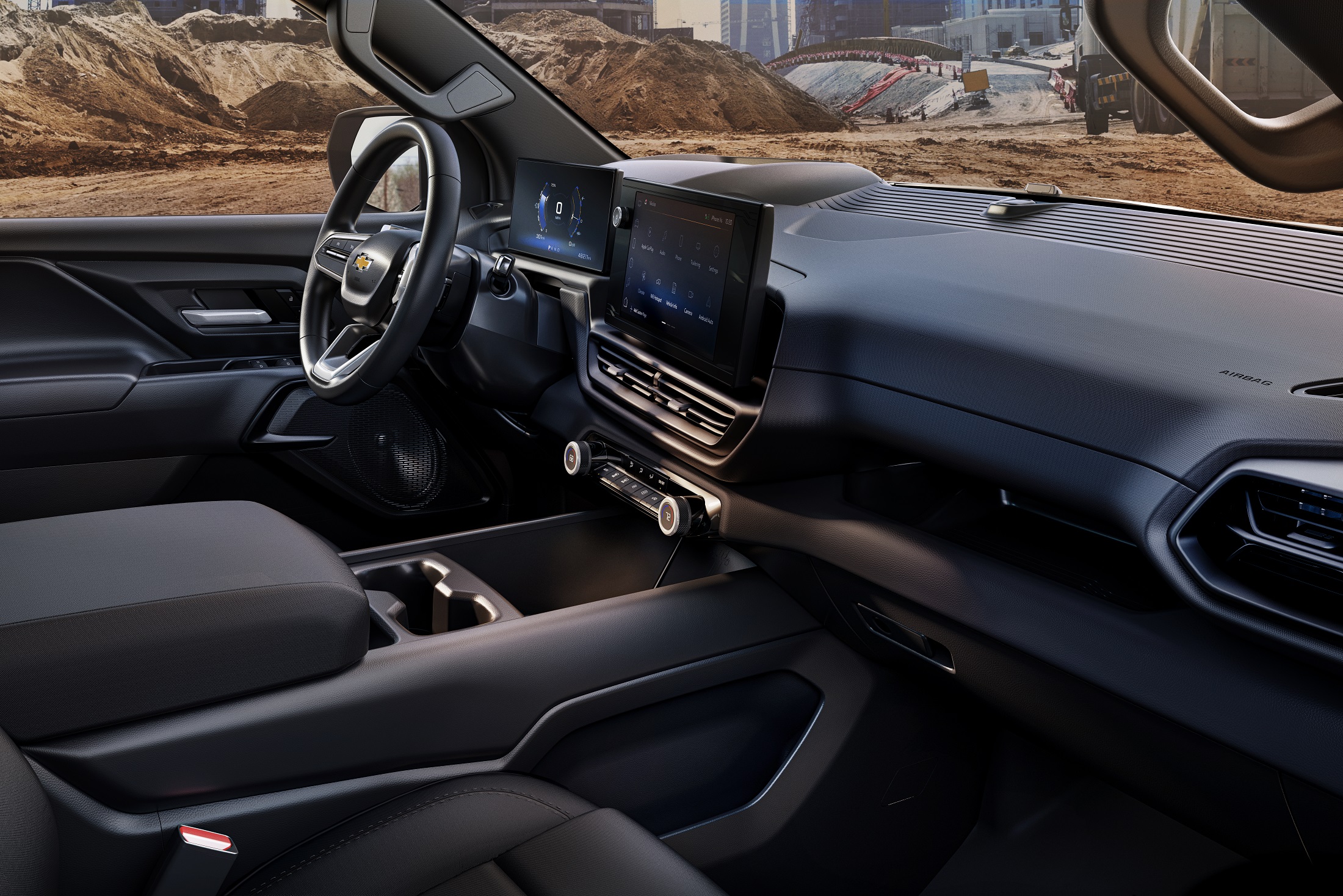