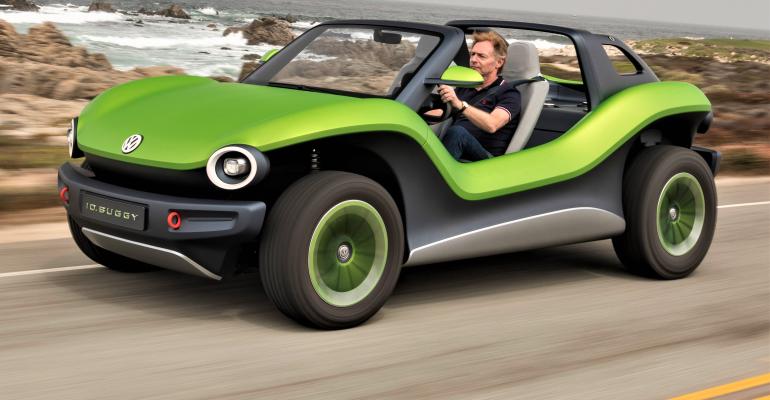 The ID. Buggy was conceived to inject some fun and flippery into Volkswagen’s upcoming ID. family of electric vehicles. It also showcases the versatility of VW’s MEB EV platform, which makes its production debut next month underneath the new ID. 3 hatchback.

Volkswagen advances toward a future of new electric-powered models under its recently created ID. sub-brand.

The German automaker’s plan, which is budgeted to cost over $50 billion for the Volkswagen brand alone, has been meticulously conveyed with the unveiling of six different concept cars over the past four years. The latest is the eye-catching ID. Buggy, a back-to-basics 2-seater inspired by the classic Meyers Manx Dune Buggy.

The high-riding, battery-powered concept, which has no doors or fixed roof, was conceived to inject some fun and flippery into the upcoming ID. family. It also showcases the modularity and versatility of VW’s MEB electric-car platform, which will make its production debut next month underpinning the new ID. 3 hatchback.

However, the ID. Buggy is more than just for show. VW says it is genuinely serious about placing the machine into production as a low-volume addition to the future ID. lineup. It has even taken the unusual step of seeking out possible partners capable of handling small-scale production, suggesting it could license the MEB platform to companies interested in building an electric modern-day recreation of the Manx.

While there’s no official confirmation whether production will happen, the good news is that the only ID. Buggy now in existence is driveable, albeit at low speeds only.

It successfully updates the look of the Meyers Manx with a friendly face featuring a low-set bumper and round headlights that contain daytime running lights and pupil-like main-beam projectors.

As with the Meyers Manx, the ID. Buggy’s unadorned plastic body appears to float above the chassis. The reinforced windshield is freestanding, without any additional support. A composite fabric roof provides protection from the elements. Rollover protection is provided by a sturdy structure behind the two seats.

The rear mirrors the look of the front, with round taillamps and a bumper housing tow hooks.

Power comes from a rear-mounted electric motor developing 202 hp and 228 lb.-ft. (309 Nm) of torque. It drives the rear wheels exclusively, with an electronic differential providing a torque-vectoring effect for optimal traction. As with other ID. models already signed off for production, VW says a second electric motor could be packaged up front to provide 4-wheel drive should buyers request it.

With a charging capacity of 100kW, VW claims the battery of its latest concept can be charged from empty to 80% within 30 minutes.

The minimalist interior (below, left) makes extensive use of durable materials, including waterproof upholstery for the seats, cast aluminum pedals and a largely flat plastic floor. With no infotainment system, the only real nod to luxury is a Bluetooth speaker positioned between the seats, which can be used to play music via a smartphone. Cargo can be stowed in a covered well at the rear. 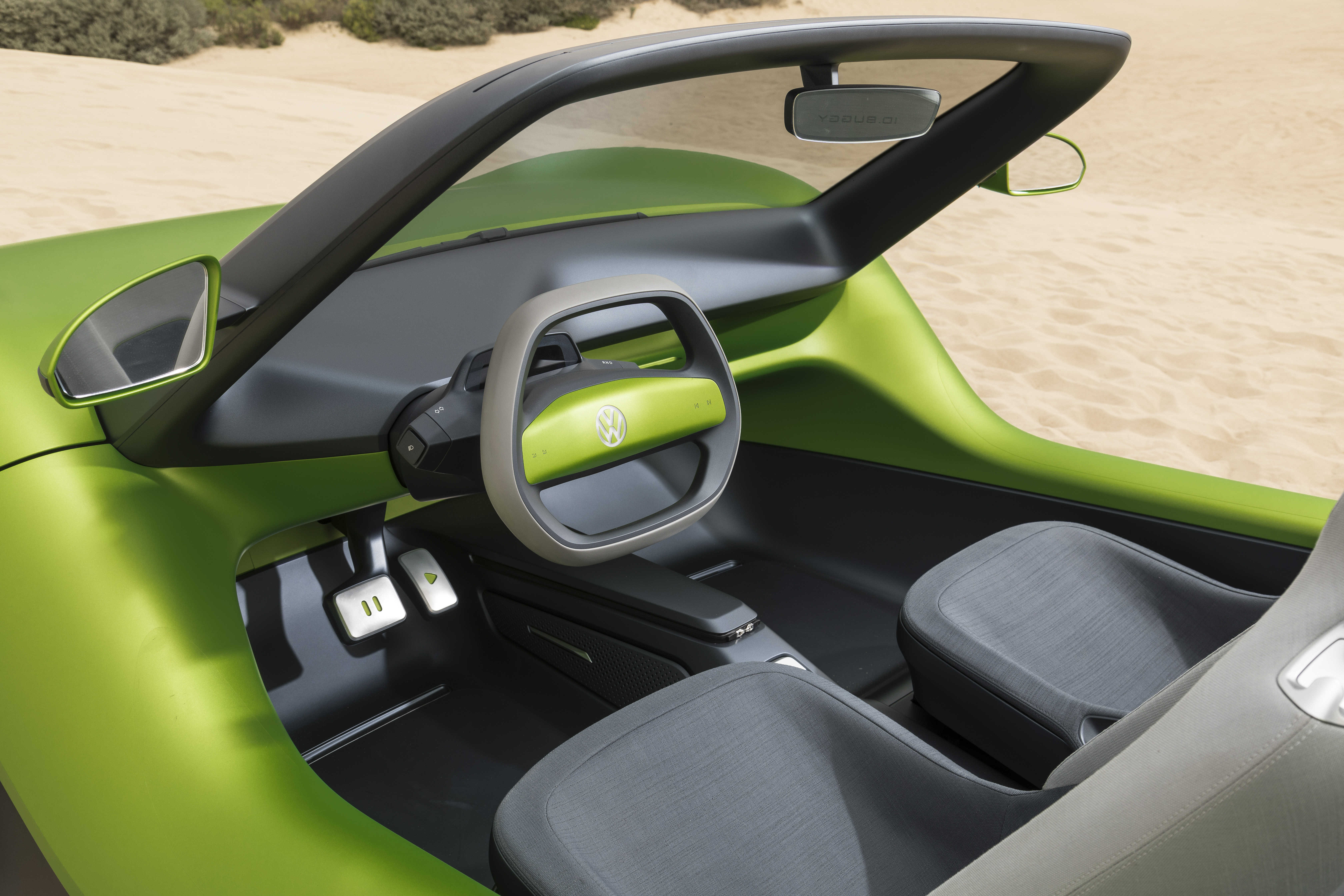 Behind the hexagonal steering wheel sits a small digital display exclusively for the instruments and controls; a rotary dial on the left works the indicators while a similar control on the right is used to select drive and engage the handbrake.

The inherent characteristics of the VW-developed driveline satisfy the requirements of an off-road buggy quite well. This isn’t a class of car that’s typically driven long distances, and even less so on highways. In this respect, its battery appears well matched to how potential buyers might use it, giving it sufficient range without carrying unnecessary weight.

Will the ID. Buggy ever reach production? Happily, it seems likely.

Nothing is official just yet, but VW says is actively seeking partners to build what is arguably the most radical ID. model yet. With all the talk about its future being quite positive up to now, there’s no reason to believe it won’t eventually see showrooms.

That said, don’t expect it to appear on North American roads (or beaches) anytime soon. VW has its hands full gearing up for the introduction of its first dedicated electric car, the ID. 3 hatchback. Still, the ID. Buggy should be taken seriously. The automaker knows it is on to something with its resurrection of the Meyers Manx, and all indications are that it’s well down the road in negotiations to ensure it reaches production.