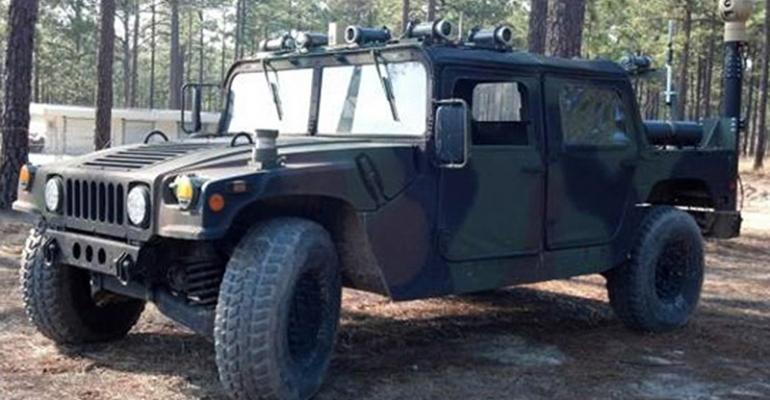 WARREN, MI – They’ve been producing and engineering military vehicles in this Detroit suburb at what locals simply call “the Tank Plant” since World War II.

The site lives on as the home of the Tank-automotive and Armaments Command TACOM, which has responsibility for the life cycle of U.S. Army and Marine Corps vehicles. The Tank Automotive Research, Development and Engineering Center, or TARDEC, is co-located in Warren.

While it enjoys a storied past, the sprawling location now is becoming the source of the Army’s urgent drive into the future: Driverless autonomous vehicles. Their broadly ranging duties in modern warfare include saving soldiers’ lives.

TARDEC, which celebrates its 70th anniversary this year, has R&D responsibility for advanced technology used in ground-vehicle systems, with primary emphasis on power and mobility. Its purview covers dozens of mission-specific vehicles ranging from giant 80-ton tanks to troop and cargo carriers, right down to those roughly the size of golf carts.

TARDEC has numerous self-driving vehicles in various stages of development, but only one – if indeed it can be described as a traditional vehicle – is operational: A small robot called TALON that blows up deadly roadside IEDs (improvised explosive devices) spotted by drones or helicopters.

TARDEC officials say the robot has been deployed for some time in the Middle East, where it ranks high in popularity.

Much of TARDEC’s work is classified, but one mission is not: Seeking collaboration with outside sources on autonomous technology. Paul Decker, who recently took over as director of TARDEC’s National Automotive Center, says autonomous vehicles will be “a major focus” in his new job.

“We’re just starting discussions with (potential) partners and collaborators, especially covering on-road vehicles but also heavily off-road vehicles. We’ve got on-road maps but not off-road” where many military vehicles typically operate under extreme conditions such as snow, ice, sand and swirling dust, he says. “These aren’t captured by Google,” Decker points out.

Google, however, is an acknowledged leader in autonomous technology and is among those TARDEC seeks to work with closely. Others include Apple, Tesla and practically every OEM and automotive supplier worldwide that’s chasing the technology.

One civilian area of where the technology already is proving itself: Driverless commercial and industrial vehicles, up to now primarily off-road, such as mining operations.

TARDEC has adapted a Freightliner Class 8 truck for hauling water and fuel for autonomous driving, but it remains experimental. Like other TARDEC prototypes, testing until now has taken place mainly on military bases to maintain control and where it needs no local approval.

Several states are gearing up to conduct autonomous-vehicle trials on major freeways, and TARDEC expects to participate. In Michigan, these routes include a triangle consisting of Interstates 69, 696 and 94, all being prepared by the Michigan Dept. of Transportation to enable driverless vehicles. TARDEC’s initial focus is I-69, a relatively low-traffic freeway compared with the others.

In a recent development, the Obama Admin. in mid-January proposed a 10-year, $4 billion program to develop self-driving vehicles. It aims to reduce human error and highway deaths and seeks to avoid a mishmash of state programs. What role the military might play is not yet clear.

TARDEC Looking to Work With Mcity

Another venue TARDEC is looking to work with is Mcity, a new testing facility located on a 32-acre (11-hectare) site on the University of Michigan’s North Campus in Ann Arbor. Operated as the U-M Mobility Transformation Center, Mcity simulates a wide range of driving complexities to evaluate connected and autonomous vehicles, including varying road conditions, roundabouts, tunnels, road signals, lighting and more.

Logistics is a primary target for TARDEC’s programs: Platooning driverless vehicles transporting fuel and supplies to the troops, making for safer trips and also saving fuel by improving aerodynamics. It’s the same principle NASCAR drivers employ to stretch fuel by “drafting” cars ahead of them.

A Stryker is defined as an IAV, or interim armored vehicle. It has eight wheels and is designed to transport small numbers of foot soldiers during combat missions over severe terrain. The Bradley is tracked, like a tank, heavily armored and can carry six well-equipped soldiers.

On the other end of the scale are small four-wheel-drive off-road vehicles. One autonomous vehicle TARDEC is developing is based on the Polaris RAZOR. While it’s possible such vehicles could serve in reconnaissance roles as the eyes and ears of the “dismounted” infantry, at the moment they are serving as test beds for technology destined for use in larger vehicles.

Incidentally, in the acronym-obsessed military, DSAT is short for “Dismounted Soldier Autonomous Tools.”

“We’re just getting started with autonomous vehicles,” says Sadowski. “Our main activity is facilitating partnerships and my job is to be the catalyst for deeper discussions to make these linkages. Clearly the trend is toward AVs. I don’t know if we want to automate everything because we’re on a long-term development track.”

Humvees, the military’s workhorse, are first on his priority list. TARDEC already has demonstrated converting Humvees to operate without a driver is feasible, but so far none has been deployed.

In addition to these measured steps, some TARDEC demonstration programs take on Star Wars overtones. In a project with Sikorksy, an unmanned Black Hawk helicopter interacts with an unmanned large SUV on the ground.

“Less technology is needed for on-road vehicles because the surfaces are predictable,” says Sadowski, adding that on-road troop carriers “are not currently in our plans.”

But the payoff is invaluable. Unmanned operation can keep troops safer by taking on the “dirty, dull or dangerous jobs,” he says.

TARDEC activities, like all federal agencies, naturally are subject to funding whims, which is one reason why Sadowski and Decker are seeking to collaborate with civilian sources.

“We want to engage auto makers, suppliers and others that have applications for the military to leverage time and costs, Sadowski says.

“A big part of that is the affordability of scale,” he says, meaning the higher the volume presumably the lower the cost of components and systems.

“Our goal is to get autonomous vehicles sustainable for long periods (of operation) because, unlike humans, robots don’t get tired,” Sadowski says.