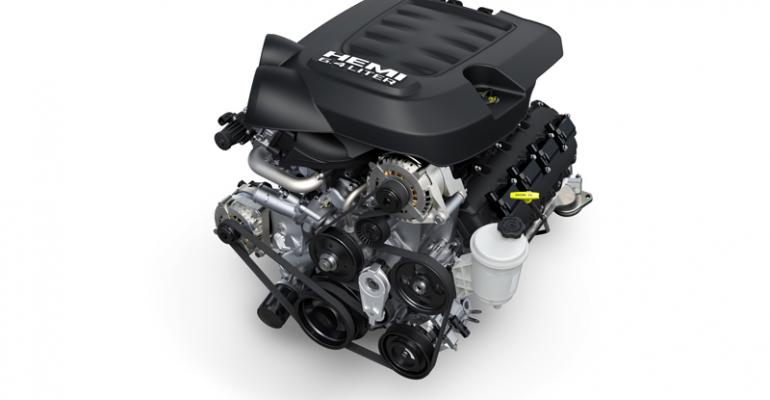 The diesel-dominant heavy-duty pickup line gets a tried-and-true gas-powered Hemi, while the light-duty line adds its first diesel.

CHELSEA, MI – Engine options play a key role in the growth of the Ram brand over the next few years.

Chrysler is hoping to gain more heavy-duty-truck customers by adding a third engine to its lineup for the ’14 model year.

Whether the auto maker actually is setting the stage for an SRT-tuned Ram product remains to be seen, but the addition of the engine is significant in other ways.

For the first time, the 3500 pickup will have a gasoline-engine option; previously, only the 6.7L Cummins diesel powerplant was available. There also are more engine options for the 2500, which offers the 6.7L diesel and 5.7L gasoline-powered Hemi.

The addition of the 6.4L to the lineup was a couple of years in the making, Ram President and CEO Reid Bigland says at the auto maker’s annual product showcase here.

Bigland says there is no concern that 5.7L customers may opt for the 6.4L engine instead.

“The (5.7L) Hemi will still be our standard gas powertrain in the half-ton, but where the duty cycle demands are a little more rigorous and a little more onerous, that’s where we’ll be able to deploy the 6.4L…particularly in the 3500 1-ton market where we currently do not have a gas offering, so it should provide a nice incremental sales opportunity for us,” he says.

Another new option, the 3.0L EcoDiesel also offered in the Grand Cherokee, is designed to sway more customers, Bigland says.

“It’s a great differentiatior in the marketplace because we will be the only ones with a half-ton pickup with a diesel engine,” he says. “I think we’ve got something on paper that looks very intriguing and I think should do very well for us in the marketplace.”

Separately, Bigland says a new small commercial van based on the Fiat Doblo still is due for Ram, but may be sold alongside the brand’s existing Commercial Van derived from the Dodge and Chrysler minivan architecture.

“Definitely the C/V is not going to go away before the Doblo comes,” he tells WardsAuto. “The only question is, will we continue the C/V at the same time as when the Doblo comes. We haven’t decided that yet. We may have two vans in the market, the C/V and the Doblo.”