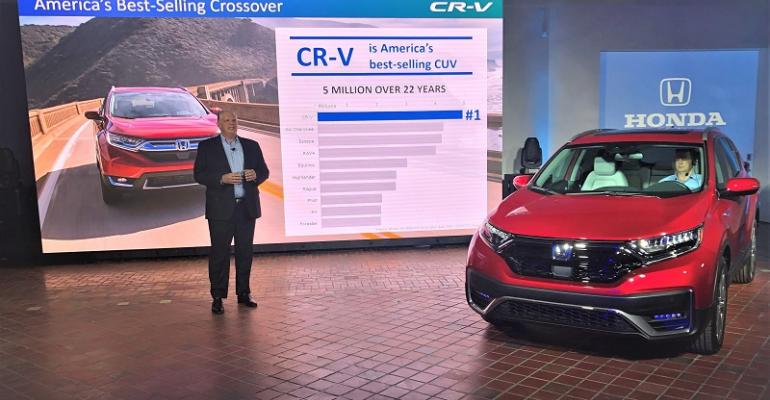 Honda remains bullish on hybrids, especially the CR-V Hybrid and expects the model to account for 10% of model sales.

DETROIT – Honda unveils the ’20 CR-V and first-ever CR-V Hybrid, a pair of models the automaker hopes will further broaden its presence in the booming SUV/crossover segment at a time when fuel prices in the U.S. remain low and the Trump Admin. seeks to roll back fuel-economy and emissions standards.

Consumers tend to buy fuel-efficient vehicles during periods of elevated gasoline prices, but the national average of $2.65 per gallon has them chasing bigger vehicles, including large pickups.

At the same time, automakers have needed to push hybrid and electric vehicles to meet tightening fuel economy standards, although that pressure may ease if the White House succeeds in revoking the ability for California and a dozen other states to set standards tougher than federal rules.

“It is a reasonably conservative estimate,” St. Cyr says after revealing the new crossovers.

St. Cyr says American consumers are choosing hybrids more these days, partly because they are more refined than past iterations but mostly because younger buyers want to make a difference.

“You are finding a whole generation of people committed to saving the world, saving the environment,” he tells Wards.

Honda counts itself among those environmentalists. It has committed to reduce its global carbon-dioxide emissions 50% by 2050 and two-thirds of its global lineup will be electrified by 2030. As such, St. Cyr says whether U.S. standards are relaxed after what is sure to be a protracted legal battle over the California rules will not change the Japanese automaker’s strategy.

“We are on our path,” he says, although noting a single national fuel-economy and emissions standard would be preferred.

As for the new CR-V, it is redesigned inside and out, with added features and upgraded powertrains to bolster Honda’s SUV/crossover momentum near the 700,000-unit-annual mark. The automaker sold 624,082 vehicles in the segment last year, up from 275,115 nine years ago. 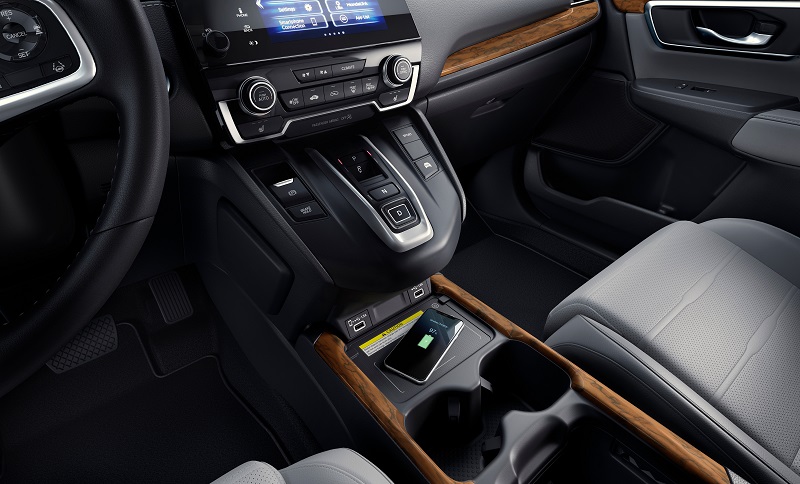 In addition to more aggressive and rugged styling to the front and rear of the new CR-V, which includes smartly hidden exhaust vents and blue Honda badging unique to hybrid models, the powertrains have been upgraded.

The automaker’s vaunted 2-motor hybrid system, which it employs on products around the world with slight model-to-model tweaks, combines a 2.0L, 16-valve DOHC Atkinson-cycle gasoline engine with a motor-generator. The battery-backed unit provides total system output of 212 hp and an electrically boosted 232 lb.-ft. (315 Nm) of torque. The package does intrude on cargo space, and the CR-V Hybrid retains a 60/40 folding second row and flat load floor.

Honda has not received federal fuel-economy ratings for the hybrid, which is due early next year, but St. Cyr says it will mark a significant improvement over the gasoline model and a 50% gain in city-cycle efficiency.

The CR-V Hybrid marks the first Honda 2-motor hybrid to receive standard all-wheel-drive. The system uses an electronic clutch when traction is low to send the appropriate amount of power to the rear wheels from the electric motor.

The gasoline CR-V receives a 1.5L DOHC turbocharged and directly injected VTEC 4-cyl. rated at 190 hp and 179 lb.-ft. (242 Nm) of torque. Honda says both responsiveness and refinement are improved on the engine through its full operating range. It is mated to a continuously variable transmission and available with front-wheel or AWD configurations. Fuel economy is rated at 27-33 city/hwy (8.7-7.1 L/100 km) for AWD models.

Inside, the center console of the CR-V has been redesigned, wireless phone charging has been added, access to USB is enhanced and the Hybrid model receives a push-button gear selector and multiple drive modes. 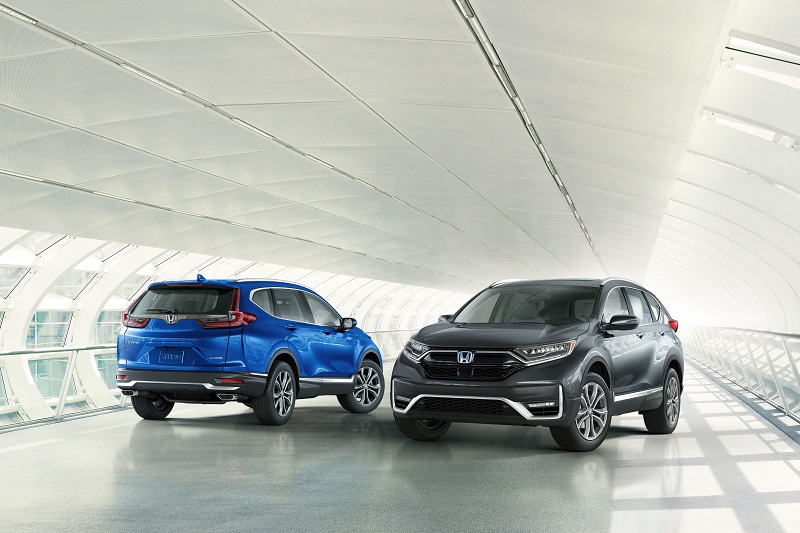