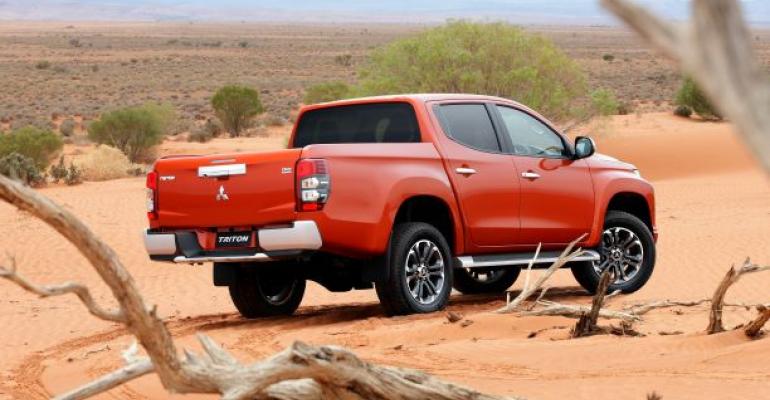 Following its launch in Thailand, the Triton will debut in other Southeast Asian markets as well as Oceania, the Middle East, Europe, Africa and Latin America. It eventually will be sold in 150 countries.

Following its Thai launch, the Triton will debut in other Southeast Asian markets as well as Oceania, the Middle East, Europe, Africa and Latin America. It eventually will be sold in 150 countries.

Mitsubishi plans to sell 180,000 units of the new and current models this fiscal year.

The new Triton is the latest version of a model celebrating its 40th birthday this year. It is being built at Mitsubishi’s Laem Chabang Plant in Thailand.

Mitsubishi Motors CEO Osamu Masuko says the new Triton/L200 is one of the automaker’s most important global strategic models.

“Its success will accelerate the momentum of the company’s sustainable growth,” Masuko says in a statement. “The new model brings enhancements to the durability, reliability and comfort developed over the 40 years since the introduction of the series.”

New Triton 4WD models are equipped with either Super-Select 4WD, which delivers optimum traction and handling characteristics for any surface, or Easy-Select 4WD, which simplifies switching between drive modes for different road surfaces, Mitsubishi says.

Active-safety and driver-assistance systems include forward-collision mitigation, which can detect vehicles and pedestrians ahead; blindspot warning; rear cross-traffic alert; ultrasonic misacceleration mitigation system that reduces accidents resulting from improper use of the accelerator when moving forward or reversing; 360-degree monitor, generating an overhead image of the area around the vehicle; and parking sensors.