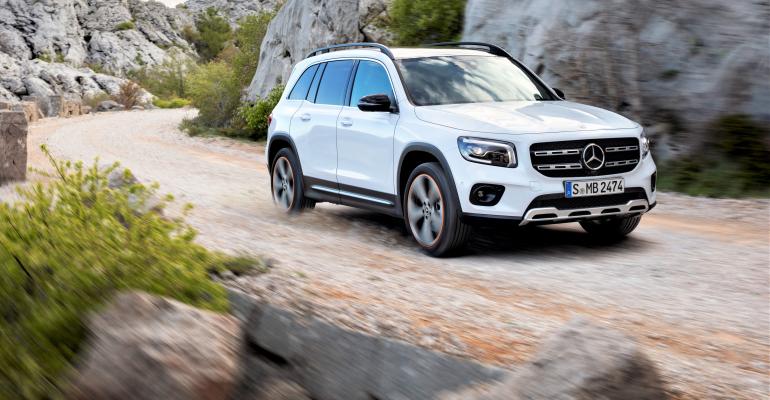 The GLB has been conceived to deliver class-leading versatility in a move Mercedes-Benz expects will see it appeal more to family-car buyers than the smaller GLA.

Mercedes-Benz’s eighth compact model, the GLB CUV, is revealed at a media presentation in Salt Lake City, UT, ahead of a planned start to North American sales of the Audi Q3 and BMW X1 rival later this year.

Offering the choice between a standard 5-seat and optional 7-seat interior layout, the GLB has been conceived to deliver class-leading versatility in a move Mercedes-Benz expects will see it appeal more to family-car buyers than the smaller GLA – itself set to be replaced by an all-new second-generation model that is planned for launch in 2020.

The production version of the GLB, codenamed X247, retains the upright and largely unadorned lines of the Concept GLB revealed in April at the Shanghai auto show, albeit without some of the more rugged and off-road-inspired exterior styling elements of the one-off show car.

Inside (below, left), the GLB receives a dashboard featuring Mercedes-Benz’s so-called widescreen cockpit consisting of a single digital panel housing the instruments and infotainment functions. It is controlled by the automaker’s latest touchscreen MBUX user interface, which can be optioned with both speech and gesture control.

Mercedes-Benz claims best-in-class front-seat headroom and, with a wheelbase that is 3.9 ins. (99 mm) longer than that of the third-generation A-Class hatchback at 111.4 ins. (2,830 mm), a generous amount of nominal legroom for the second row of seats.

To maximize versatility, the second seat row offers 5.5 ins. (140 mm) of longitudinal adjustment as well as multiple backrest inclination adjustment. When optioned with a third row of seats, the GLB receives a so-called easy entry function as well as two individual third-row seats that can be folded away into the floor when not in use.

Details of the GLB engine lineup for the North American market haven’t been made official yet.

In Europe, buyers will be able to choose between two 4-cyl. gasoline engines and a single 4-cyl. diesel in two different states of tune from the outset of sales. All but the top-of-the-range all-wheel-drive diesel come as standard with front-wheel drive.

The all-wheel-drive GLB220d 4Matic can be ordered with an optional Off-Road Engineering Package, which adds Multibeam LED headlamps among other extras.

A 7-speed dual-clutch gearbox is standard in the GLB200, while the GLB250, GLB200d and GLB220d 4Matic all receive a more advanced 8-speed gearbox. 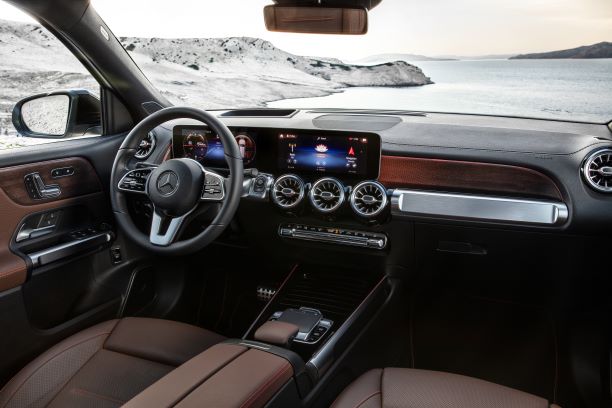 Also under development is an all-wheel-drive plug-in hybrid variant of the GLB featuring an electrified rear axle and electric-only range that Mercedes-Benz sources put at “well over” 31 miles (50 km).

The new CUV also forms the basis of an all-electric EQ B model planned for sale in 2021.

The GLB for the North American market will be produced at a joint-venture manufacturing facility operated by Mercedes-Benz and its alliance partner Renault-Nissan-Mitsubishi in Aguascalientes, Mexico.

Further production will take place at a joint-venture factory run by Mercedes-Benz and Chinese automaker BAIC in Beijing.