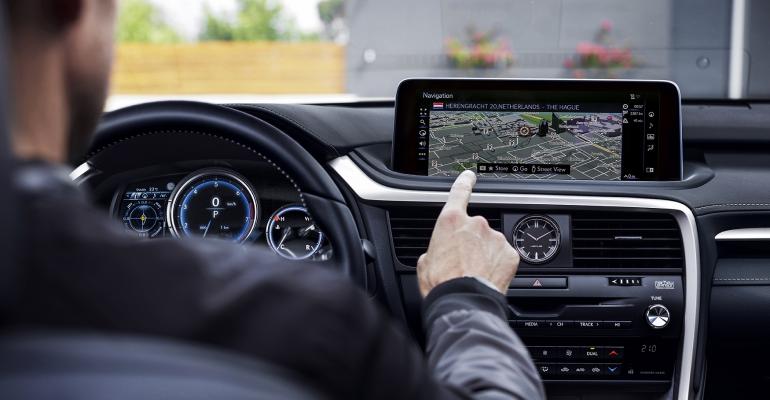 CULVER CITY, CA – Given the pace of change of technology, and rising consumer expectations, a bulk of the updates to the ’20 Lexus RX pertain to infotainment and the user experience.

Advanced voice-recognition technology, redone visuals on the CUV’s on-board navigation system and the ability to control the screen via touch are a few of the changes coming to the interior of the refreshed model, on sale later this year in the U.S.

Available on ’20 RXs with the 12.3-in. (31-cm) touchscreen is Dynamic Voice Command, the most advanced version of Lexus’ voice-recognition technology yet.

Requests for information are sent off-board to the cloud, which Lexus says should yield better and more complete results.

“It allows us to expand our database, our points of interest and/or addresses, from 60,000 up to a million,” Yzquierdo says of DVC.

He says searches for POIs can be both generic (burger restaurants) and specific (exact name of restaurant, on X road in X city).

However, DVC is not as conversational or voice-assistant-like as Mercedes-Benz’s new MBUX system, which allows users to start with the opening line, “Hey Mercedes.”

Toyota has been one of the last automakers to offer AA and AC in its models in the U.S. While some Lexuses have AC, AA is new with the RX integration (a rollout is planned to other ’20 models). Yzquierdo says the delay stemmed from development periods spent with Apple and Google to make certain both AC and AA are well integrated within the RX’s infotainment system.

While the 12.3-in. high-resolution screen is the same size as in the outgoing ’19 RX, it now is a touchscreen and also features some updated graphics.

Because audio and climate selections now can be made via touch, Lexus moved the screen forward 5.5 ins. (140 mm) to make it easier for drivers and passengers to reach.

Lexus says the ability to access menus with a touch of the screen isn’t a reaction to negative feedback for the brand’s center-console-mounted remote touch pad, but rather responding to complaints from RX owners that passengers couldn’t access the touch controller.

Says Jessamine Merrill, general manager-product and consumer marketing for Lexus: “One thing we did hear from customers is they have passengers, and other people want to interact with the screen who aren’t driving, and when we had the remote pad, it was very much in the old generation,” near the driver on the center console.

The remote touch pad, identical to touch pads in newer Lexuses such as the ES and UX, replaces the mouse-like remote touch controller in the ’16-’19 RX.

“The navigation has a whole new refreshed look to it, so the animations, the color, everything has been revamped on it,” says Chad Deschenes, product trainer for Lexus College, Lexus’ dealer-training arm. “They added more of a vignette-type of look to it that adds a little bit more drama into the car, that I personally like.”

The refreshed ’20 Lexus RX goes on sale in the third quarter in the U.S. It is available in both conventional and hybrid versions, as well as in 2- or 3-row variants.