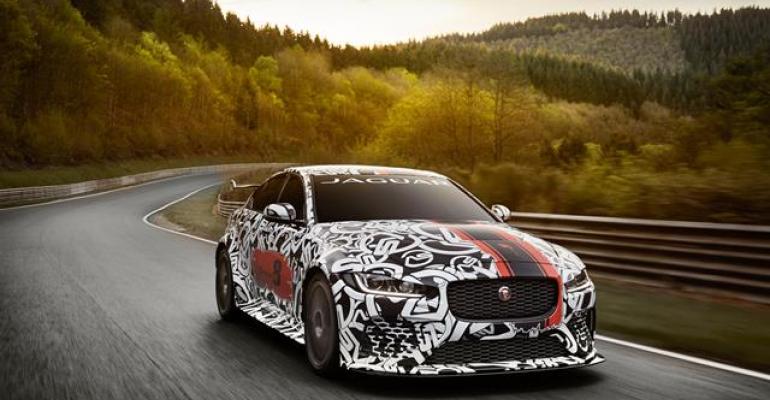 Jaguar expects the Project 8 will become the second Collectors&rsquo; Edition vehicle from SVO, following the successful launch of the 567-hp Jaguar F-Type Project 7 in 2014.

COVENTRY, U.K. – Jaguar produces the most powerful road-legal model in its history with the XE SV Project 8.

It broke cover recently in camouflage during shakedown testing at the Nürburgring Nordschleife race track in Germany.

Jaguar expects the Project 8 will become the second Collectors’ Edition vehicle from SVO, following the successful launch of the 567-hp Jaguar F-Type Project 7 in 2014. No more than 300 cars, each hand-assembled at SVO’s Technical Centre in Coventry, will be created. The automaker targets export markets because all of the vehicles will be left-hand drive.

“The time is right for SVO to produce the most extreme performance road car in the history of Jaguar,” says John Edwards, managing director-Jaguar Land Rover SVO. “The SVO team is possessed by the spirit of performance and committed to creating the most thrilling driving experience imaginable.

“Our clients worldwide were thrilled by the F-Type Project 7,” he adds. “The new XE SV Project 8 takes aerodynamics and performance engineering to another level. It is conceived for enthusiasts and the most discerning collectors. The price for such an extreme performance sports car available in strictly limited numbers will reflect that.”

More details on the Jaguar XE SV Project 8 will be revealed via the company’s website on June 28, ahead of its world debut at the Goodwood Festival of Speed in West Sussex two days later.