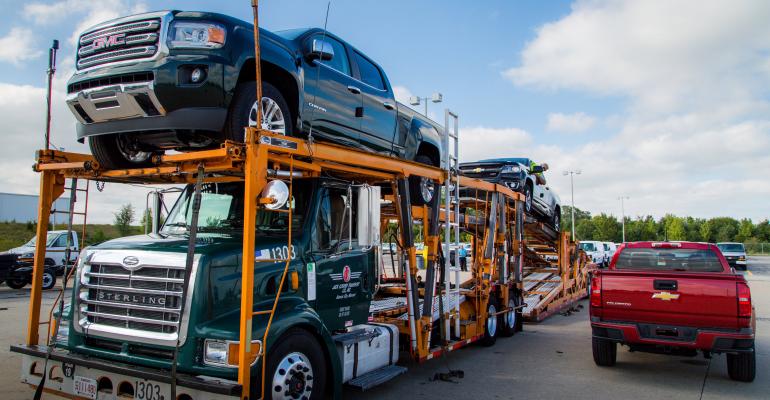 Duncan Allred, vice president-Sales and Marketing at GMC, hopes a Canyon Denali will be in the cards. An upscale treatment to the pickup in the future would provide a boost against fresher competition.

DEL MAR, CA – General Motors introduces all-new midsize pickup trucks to the U.S. market in the coming weeks and rivals Toyota and Honda will soon follow with redesigns of their own, but it does not keep the top truck marketer at Chevrolet awake at night.

“The difference between them and us is (that) we have an enormous depth of knowledge on trucks,” says Sandor Piszar, director-Truck Marketing at Chevrolet.

As the ’15 Chevy Colorado and its GMC Canyon stable mate trickle into dealers, GM can boast of segment leadership in terms of fuel economy, payload and towing, gee-whiz technology and creature comforts.

But the Toyota Tacoma and Nissan Frontier currently command 93.4% of the segment, according to WardsAuto data, and a redesign of the Tacoma comes next year. A new Frontier follows in 2017. Rumor also has it a new Honda Ridgeline could come down the pipe within three years, perhaps under a new name.

Piszar thinks GM’s expertise in fullsize pickups will help the new Colorado and Canyon remain competitive down the road.

For example, the pickups utilize a fully boxed perimeter frame found on its big brothers for extra strength and a quiet, smooth ride. The competition relies on a less robust C-channel. There are smaller items such expertise yields, too, such as the corner-step rear bumpers and easy-lift tailgate.

“Trucks are in our DNA,” Piszar says.

However, Piszar does admit his pickups have image an problem, or lack thereof.

In the final full year of sales for the previous-generation Colorado and Canyon in 2012, the pair drew a combined 45,575 takers.

“We have to build awareness,” Piszar tells WardsAuto on the sidelines of media event for the new pickups here.

Especially in Southern California. Outside of Texas, no state buys more midsize pickups than the Golden State, and Piszar plans to again lean on the Chevy Silverado and GMC Sierra for marketing messages.

“Silverado is No.1 here,” he says of the Southern California light-duty market this year. “We’re known for tough trucks in the fullsize segment.”

But whereas GM’s bigger pickups are all about towing and hauling capability, the message behind the Colorado and Canyon will focus on the lifestyle aspect of ownership. “You know you want a truck, this truck,” is the go-to-market message for the Colorado.

“It’s a pickup you can commute in every day, and it’s sophisticated enough for the weekend,” Piszar says.

The first batch of pickups to arrive at dealers will be the volume-grabbing crew cabs with the longer, 74-in. (183-cm) box. Within a couple of weeks, GM’s Wentzville, MO, assembly plant will begin producing crew-cab models with the 62-in. (157-cm) box.

Output of extended-cab pickups with the long box will follow. Dealers should have a full complement of body styles by January.

For the Colorado, GM expects close to 70% of buyers to choose the 3.6L V-6 with a 6-speed automatic transmission over the 2.5L 4-cyl. with the identical gearbox. Only a handful of buyers are expected to mate the smaller engine with a manual transmission.

Duncan Allred, the newly minted vice president of GMC sales and marketing, hopes a Denali-branded Canyon will be in the cards. An upscale treatment to the pickup in the future would likely give sales a boost against fresher competition.

“We don’t have one imminent,” Allred says. “But I’m pushing for it.”

Allred says a Canyon Denali would have to offer “something different” to the range-topping SLT trim line. “No badge engineering,” he says. “We want Denali to be a long-term, credible brand.”

The luxurious Denali trim line to the Yukon large SUV now commands a whopping 70% of the truck’s sales. But the Terrain Denali CUV missed the mark, with only 10% of buyers choosing the 5-passenger CUV’s priciest trim. It lacked differentiation, Allred admits.

“Consumers are smart,” he says. “The Terrain does not offer a lot as a Denali.”

Allred expects further growth for Denali, however. It accounted for 18% of sales in 2013 and is forecast to grow to 23% by the end of the year. GM targets 25% of sales in 2015. He says more aggressive marketing will fuel the expansion, rather than an all-new model receiving the designation.

“There is more demand than supply for Denali,” Allred says.