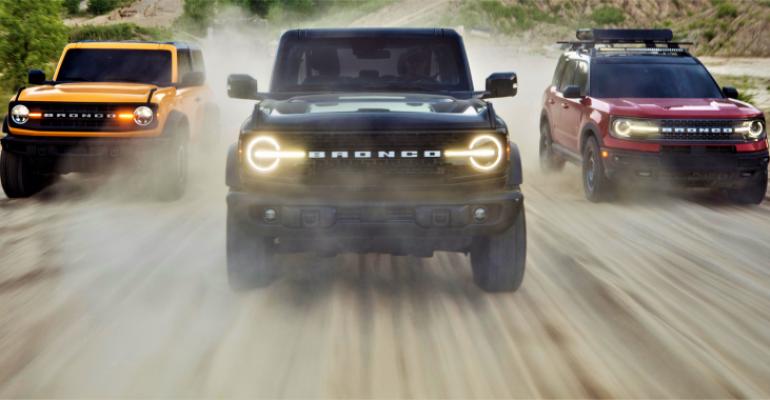 Just in time for adventurers who want to take social distancing to the extreme by venturing far from civilization, Ford resurrects the Bronco to kick up dust at every Jeep Jamboree it can find.

After being cooped up for nearly four months due to a pandemic, could there be a better time for a vehicle to go anywhere, do anything?

Ford reveals the all-new family of Ford Broncos, two of which are ideally suited for the era of social distancing: The Bronco Sport is for people who want to commute during the week, then go deep into the woods on weekends, while the more rugged Bronco 2-door and 4-door are for adventurers who want to go deeper into the woods, perhaps weeks at a time, with little or no human interaction along the way.

Eager to horn in on an enthusiast off-road market dominated by Jeep and Land Rover, Ford’s 2021 Bronco resurrects a brand icon that debuted in 1966, lasted for five generations and helped launch the SUV concept in the U.S. before being discontinued in 1996 – oddly, just before the 4x4 craze exploded.

Even in (virtually) presenting the Bronco to journalists, Ford executives repeatedly tip their hat to Jeep for connecting so deeply with young thrill seekers who can’t be happier inching over a boulder – scraping bottom along the way – or leaning so far to the right or left that barrel rolling could be in the cards.

Ford wants some of that action and to capture the passion that translates into fierce loyalty. Jeep owners were courted and included in test clinics as Ford’s product-development team moved forward over the past few years. 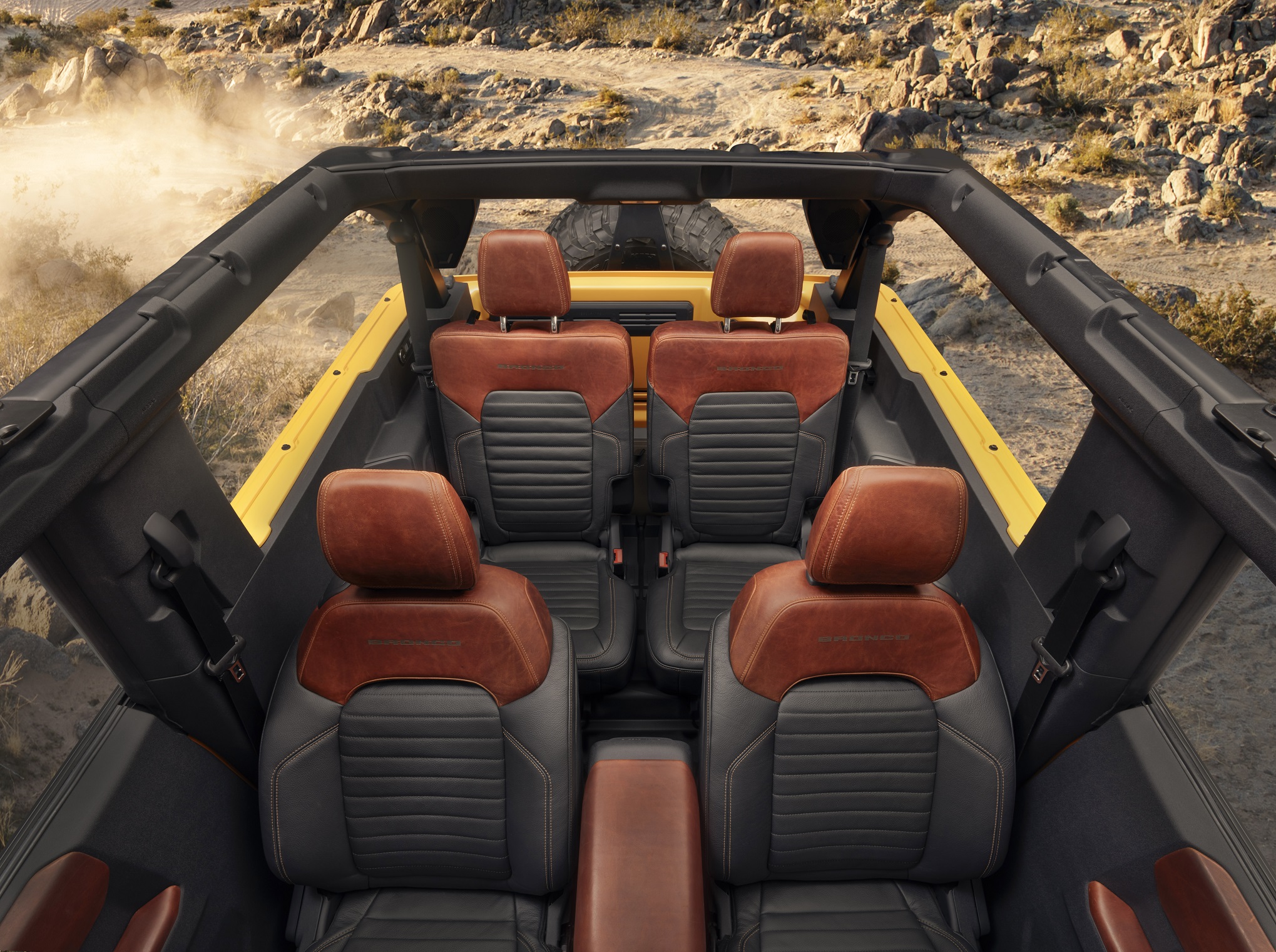 “While everyone else is trying to get out of the mud, my Jeep Wrangler is playing in it,” Ford quotes an off-roader saying in a clinic. It says something about Jeep brand equity when an automaker unflinchingly praises a competitor’s vehicle while launching its own.

It took Jeep years to establish its 2-door Wrangler for hard-core overlanding, then introduce softer, road-friendly Patriot and Compass suburban dwellers, followed by 4-door Wranglers that could tackle the trail and a snowy northern highway with equal aplomb.

In launching its new Bronco family, Ford hopes to battle Jeep on each of these three fronts.

All three are slated to arrive in showrooms by year’s end. Ford coordinated its 8 p.m. Monday EDT unveiling with Disney network channels National Geographic, ESPN and ABC to coincide with the opening of reservations ($100 refundable down payment) for all three Broncos at ford.com.

Roof panels lift off for open-air driving in Bronco 4-door.

The first five generations of Bronco were assembled at Ford’s plant in Wayne, MI. That plant has been retooled to assemble (alongside the Ranger pickup) the new 2- and 4-door body-on-frame models – the first products from Ford’s new Global Midsize Truck Architecture.

Ford will assemble the Bronco Sport in Hermosillo, Mexico, based on the Global C2 platform developed by Ford of Europe for unibody front-wheel-drive vehicles. The adapted platform incorporates significant underbody changes for the Bronco Sport, and 4-wheel-drive is standard, as it is on the Bronco 2-door and 4-door.

Four EcoBoost turbocharged engines are available, and there’s no talk publicly of an electrified Bronco in the rollout.

The standard engine in the Bronco Sport is the 1.5L 3-cyl. The optional upgrade is the 2.0L 4-cyl. Target outputs for the two are 181 hp for the 1.5L and 245 hp for the 2.0L, Ford says. An 8-speed automatic transmission is standard, but the 2.0L comes available with an oil cooler and steering-wheel-mounted paddle shifters. 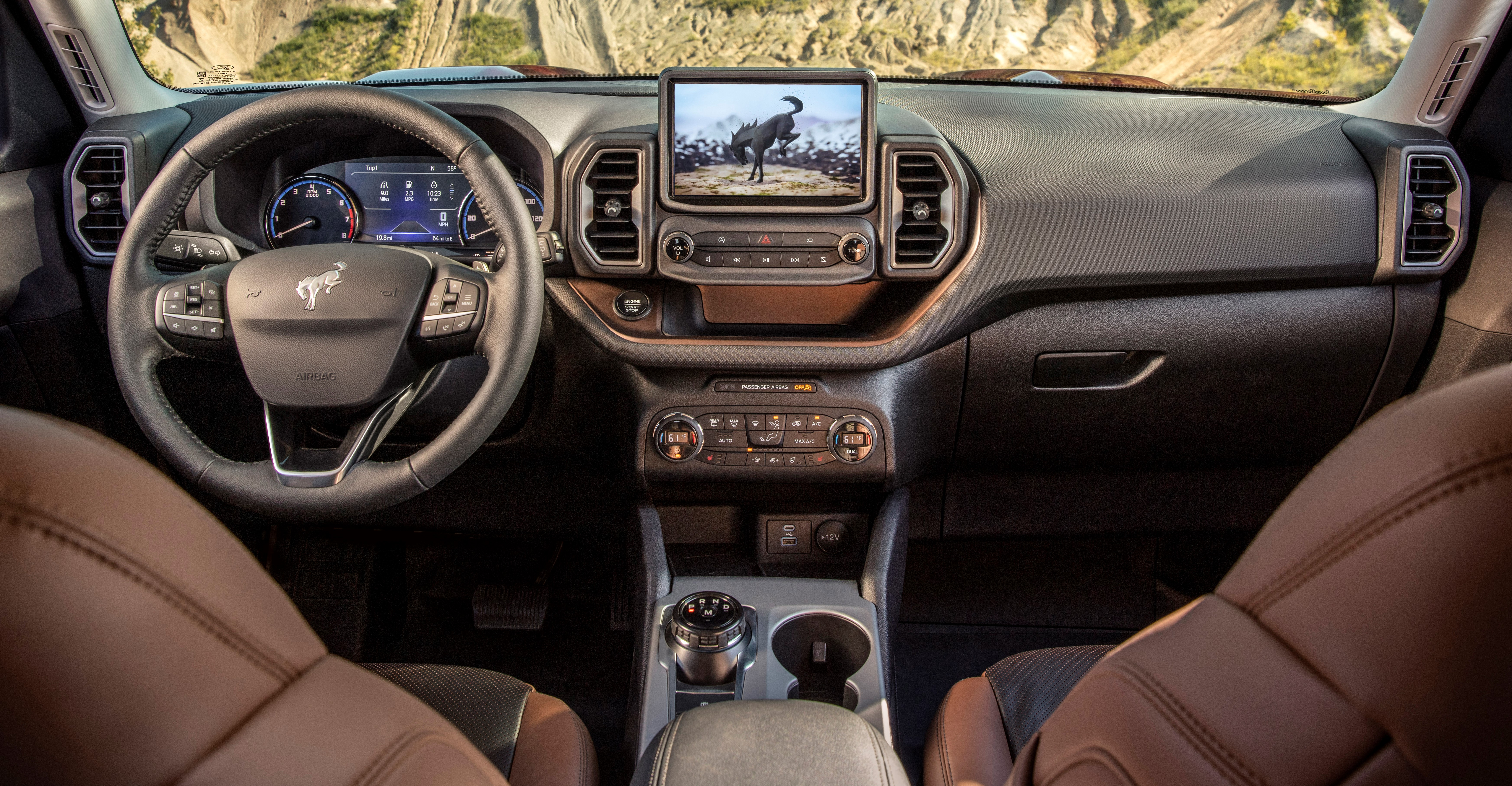 A 7-speed manual transmission is available for ultimate rock climbing in 2-door and 4-door Broncos, while a 10-speed automatic is offered as well.

The sales team expects most customers to pick the 2.3L for the 2-door and 4-door Bronco, while the 1.5L should be more popular in the Bronco Sport.

While the models differ in off-road capability, all three Broncos offer similar “GOAT” modes (Go Over Any Terrain), including Slippery, Mud/Ruts and Rock Crawl, while Baja can be selected in the 2-door and 4-door Bronco.

Pricing details have not been released, although Ford says the 2-door Bronco will start at $29,995, including a $1,495 delivery charge. The roof is fixed on the Bronco Sport, while the 2-door and 4-door Broncos have roof panels and doors that remove and stash in the cargo hold. 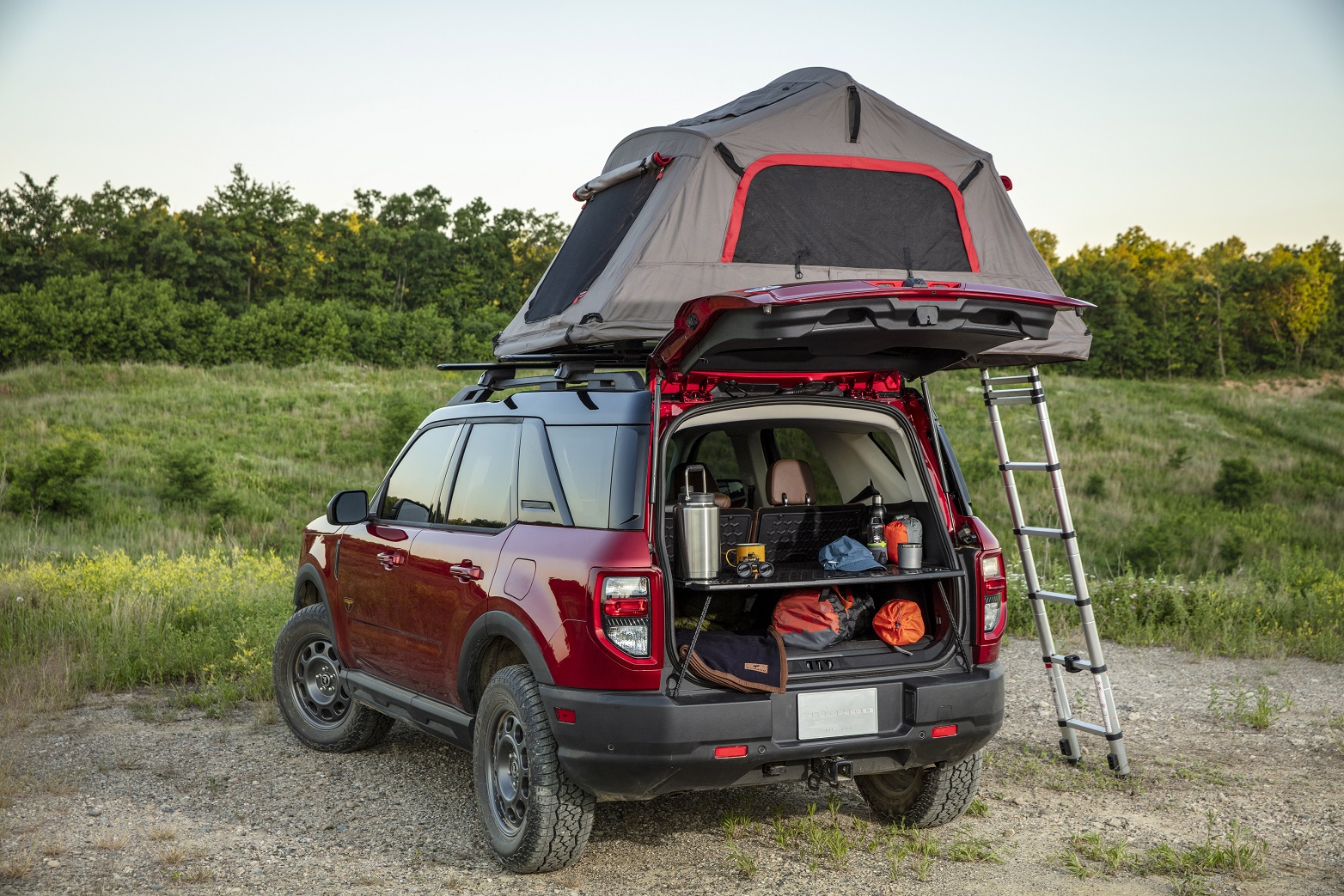 Automakers tread a fine line when developing vehicles to conquer the great outdoors.

Some hard-core challenge seekers don’t want anything fancy. They’ll pay extra for the low-ratio electromechanical transfer case, locking differential and Bilstein shocks, but they might forego leather, a premium sound system and other niceties.

At the other end are luxury intenders who won’t visit Moab or the Rubicon Trail, but they sleep well with the knowledge that they could. Think Jeep Grand Cherokee drivers who stick to the highways and byways – their money is as valuable as anyone’s.

For this wide swath of intenders, Ford is attempting to meet every need with five trim levels in the Bronco Sport. The Bronco 2-door and 4-door comes available in seven unique series, each with matched color and trim combinations, four content packages, 11 color choices and more than 200 dealer-installed accessories. 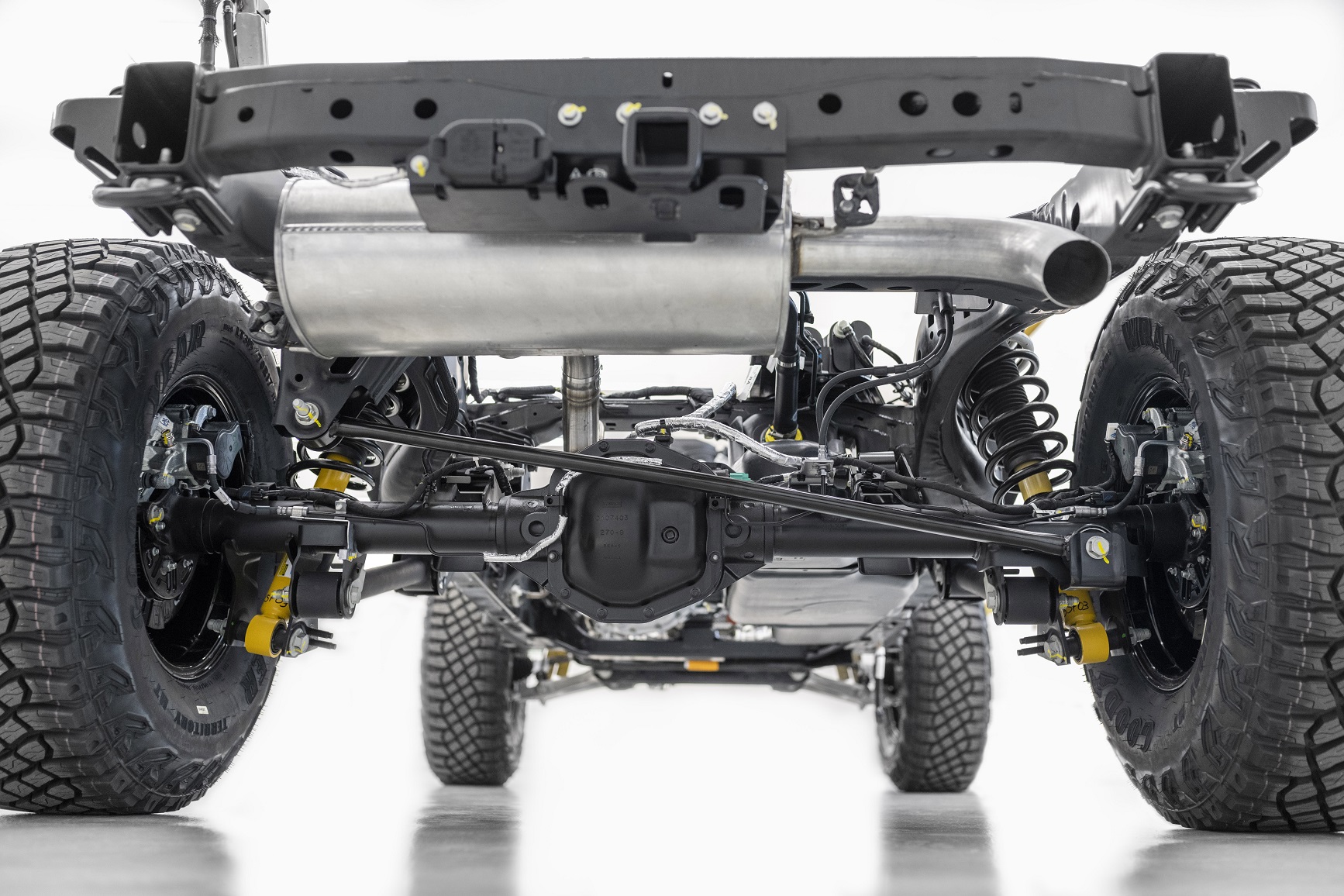 Rugged Dana axles are standard in Bronco. Ford officials say sourcing was decided on axles even before vehicle frame.

Even Bigfoot makes an appearance: The Sasquatch package, with 35-in. tires for high ground clearance in 2-door and 4-door models, will be sighted sometime next spring.

For those who want them, creature comforts are available, such as adaptive cruise control, digital trail mapping and Trail Turn Assist with torque vectoring for better maneuvering.

On the connectivity front, all 2-door and 4-door Broncos will come standard with Ford’s latest fourth-generation Sync infotainment system, as will the all-new F-150 pickup coming later this year. The Bronco Sport will use the still-capable third-generation Sync system.

Ford’s designers seemed to think of everything when conceiving an all-new family of Broncos, even incorporating a bottle opener when the Sport's liftgate is raised – a great idea for cracking open a cold one in the woods or for Saturday afternoon tailgating. 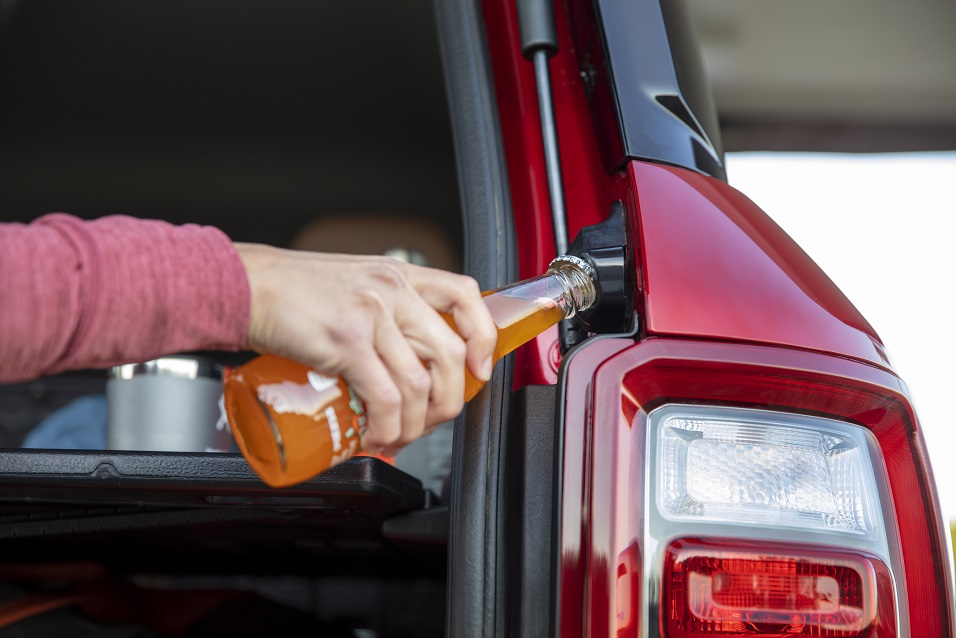