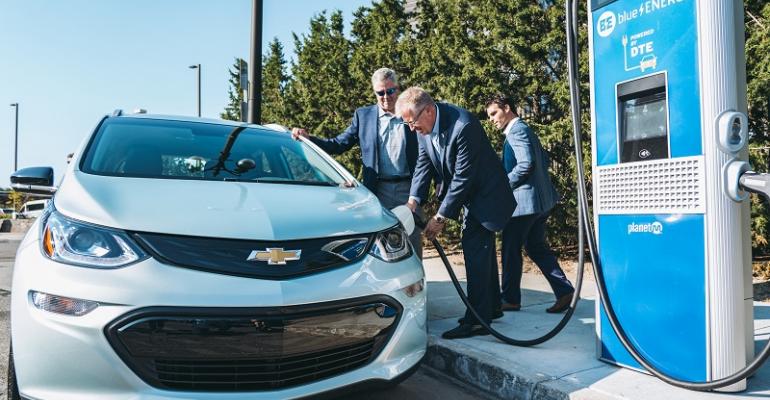 The four ChargePoint DC stations reflect projects big and small occurring around the U.S. to overcome skepticism of EVs.

DETROIT – A consortium consisting of public and private entities – including General Motors, parts supplier Lear and the Michigan’s largest utility provider DTE Energy – install a first set of public fast-charging stations for electric vehicles in Detroit hoping to kickstart a larger network and build local awareness of what the automotive industry considers the future of transportation.

“We’re going to need a variety of chargers, whether it be at home, work or public places like these,” says Jordan Catrine, manager-EV Charging and Infrastructure at General Motors. “They are all extremely important to building awareness.”

The four ChargePoint DC stations, which can fully charge an EV in as little as 40 minutes but cost about $10,000 apiece, were installed next to a popular downtown park in the city and reflect projects big and small occurring around the U.S. to overcome skepticism of EVs due largely to the lack of charging infrastructure. Plug-in vehicles represent less 1% of U.S. light-vehicle sales.

“This type of initiative is less about the number of chargers and more about EV awareness and education,” Catrine tells Wards after an event unveiling the chargers, which were hooked up to four Chevrolet Bolt EVs. “We see awareness as the biggest issue to lack of adoption right now.”

GM, which in the future wants to electrify its entire product portfolio, is working with the construction giant Bechtel on a larger-scale infrastructure for charging EVs. The companies want to install thousands of stations around the U.S. and are seeking investors to help back the project. Volkswagen, as part of its emissions-cheating penalty, will install 2,800 stations in 17 major U.S. cities.

But getting into neighborhoods and public places such as Detroit’s Beacon Park here, which is blocks from the city’s major league baseball stadium and central entertainment district, is seen as just as important to educating consumers about the technology as bigger-ticket projects.

“A program like this is not just about the curbside charging that people can see, but also the programming we’ll be working on with the city and other stakeholders,” Catrine says. “That’s the real benefit of this. And DC chargers are for on-the-go charging, so you want them somewhere like this where people can relax while they charge their vehicle.”

The Detroit project, which is called ChargeD and draws additional support from the city, the State of Michigan and local fuel supplier Corrigan Oil, will soon install two more chargers in another Detroit public space. Blue Energy, a unit of Corrigan and technology partner of ChargePoint, owns and operates the chargers. Blue Energy and DTE plan to collect and analyze user data from the chargers. It costs $1.00 to activate the chargers and $0.40 per minute afterwards.

The consortium of stakeholders responsible for ChargeD was formed last year as Project Kinetic. Project Kinetic seeks to identify mobility challenges in Detroit and deploy solutions. ChargeD is one of five Project Kinetic pilot programs and the second to launch in the city. The first was Car4You, a low-cost car-sharing project in an east Detroit neighborhood with few public transportation options. 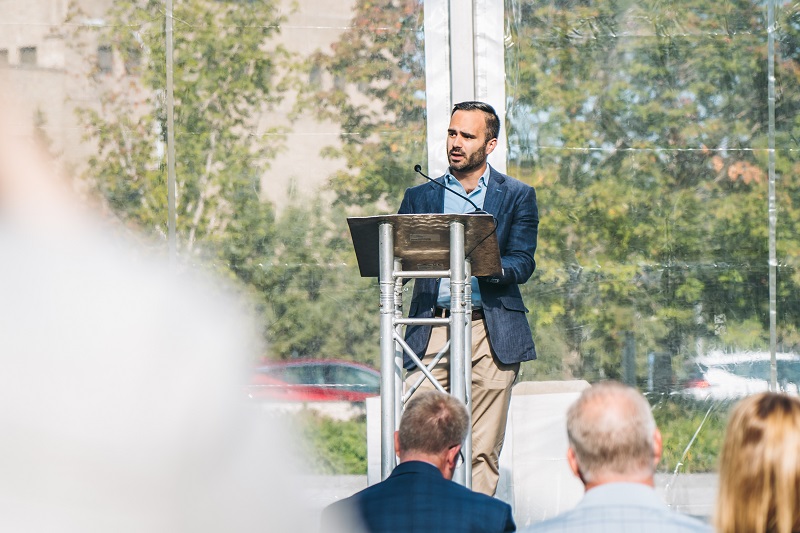