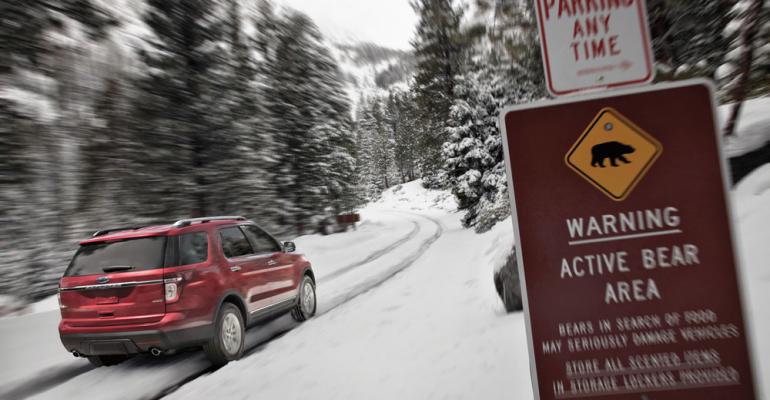 The auto maker&rsquo;s advanced system features software that preemptively reassesses road conditions 20 times faster than the blink of an eye, readjusting the power split between the wheels for an ideal blend of handling and traction.

Ford says the take rate for its performance-enhancing all-wheel-drive system is on the rise, even in regions where the technology traditionally has not been popular, and continued growth is expected.

Sales have increased 72% since 2009, outpacing the industry growth rate of 53%, the auto maker says. In 2012, nearly 37% of Ford vehicles offered with AWD were delivered with the technology.

Ford’s advanced system features software that preemptively reassesses road conditions 20 times faster than the blink of an eye, readjusting the power split between the wheels for an ideal blend of handling and traction, he says.

The AWD system, which ranges from $1,750 to $2,000, depending on the vehicle, is gaining popularity in hot-weather cities such as Miami and Atlanta, where take rates have surged nearly 70% from 2009 to 2012, he says. In Denver and Phoenix, demand has grown more than 50%, and in Dallas it has doubled.

“As AWD becomes more acceptable and we hold the price and deliver the technology without sacrificing fuel economy, the take rate will grow,” Murphy says.

Ford first offered fulltime AWD on the ’95 Explorer SUV, but the on-demand system using a transfer-case coupling was primitive compared with today’s technology. For example, if the front of the vehicle is on ice and the rear on pavement, the new system can send 100% torque to the rear of the vehicle.

“We’re using AWD for more than just traction, we’re using it to improve handling for a competitive advantage over those who aren’t using AWD that way,” says Joe Torres, senior AWD engineer.

The new system is the result of the One Ford strategy focused on leveraging the auto maker’s global resources, he says, which was implemented by CEO Alan Mulally shortly after his arrival in 2006.

Early Ford AWD systems were sourced from Swedish-based supplier Haldex, which at the time also supplied systems to Volvo, owned by Ford until 2010.

“We had different AWD systems for specific markets,” Torres says. “Now we have one-size-fits-all common hardware on small and large vehicles, and we’re getting economies of scale and synergies from a resource perspective.”

The main components of the new AWD system, developed in conjunction with supplier partner JTEKT, are located in the rear axle that is produced at Ford’s Sterling Axle Plant in Sterling Heights, MI.

Making axles in-house is more cost-efficient than outsourcing and allowed Ford engineers around the globe to collaborate on the AWD system’s development, he says.

The new AWD system was developed for multiple vehicle segments. Originally offered on the Escape and Flex cross/utility vehicles, the Taurus fullsize sedan and some Lincoln vehicles, it not is available on the Explorer and Expedition SUVs, F-150 pickup and Edge CUV.

“The new axle design is so far-reaching, we don’t have variations in rear-axle parts anymore,” Torres says. “It can support multiple mounting schemes under any car.”