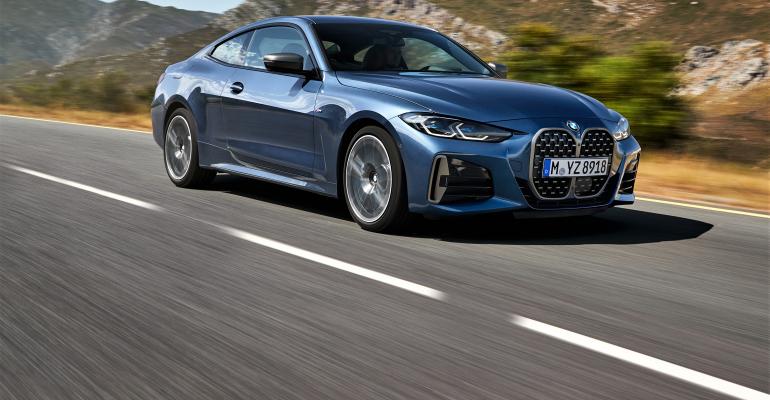 The new 4-Series will launch in coupe form, followed by successor models to today’s convertible and 4-door Gran Coupé. The range will be crowned by a new M4, which will be offered in coupe, convertible and, for the first time, Gran Coupé bodystyles.

BMW reveals the second-generation 4-Series Coupe ahead of planned North American deliveries of the new 2-door in October.

The Audi A5 and Mercedes-Benz C-Class coupe rival gets a major design revamp, including the distinctive grille treatment showcased on the Concept 4-Series revealed at the 2019 Frankfurt auto show.

Inspired by the vertical kidney grilles that graced BMWs from the 1930s, design chief Domagoj Dukec has described the bold front end as the first step toward giving each BMW model a unique interpretation of the brand’s most recognizable styling element.

The new 4-Series (interior pictured below) will be launched first in coupe form, followed by successor models to today’s convertible and 4-door Gran Coupé. 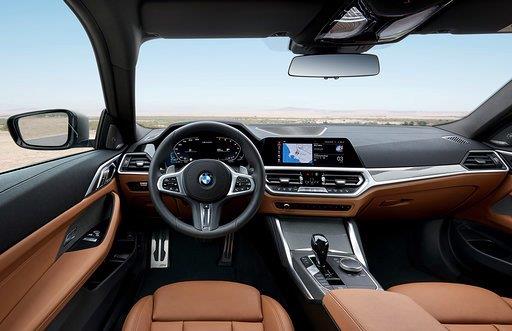 The range will be crowned before the end of 2020 by a new M4, which will be offered in coupe, convertible and, for the first time, Gran Coupé bodystyles.

However, the most powerful 4-Series variant will be the i4 - the second electric-powered BMW to share its underpinnings with a conventional internal-combustion-engined car, after the China-built iX3 SUV due out early next year.

The 4-Series’ importance to BMW can be seen in the strong sales of the outgoing first-generation model. Since its 2013 introduction as a replacement for the 3-Series Coupe, almost 700,000 examples have been sold worldwide.

Of the three bodystyles offered today, about 50% of buyers choose the Gran Coupé, while the Coupé and Cabriolet each account for about 25%.

Apart from its controversial grille (below), the new model cuts a sharper profile than before, with a long sweeping hood, a more heavily sloping roofline and a high-set trunkline providing certain aesthetic links to the larger 8-Series coupe. The aerodynamics have been improved, with the entry-level 430i Coupe claimed to possess a drag coefficient of just 0.25 compared to its predecessor’s 0.29. 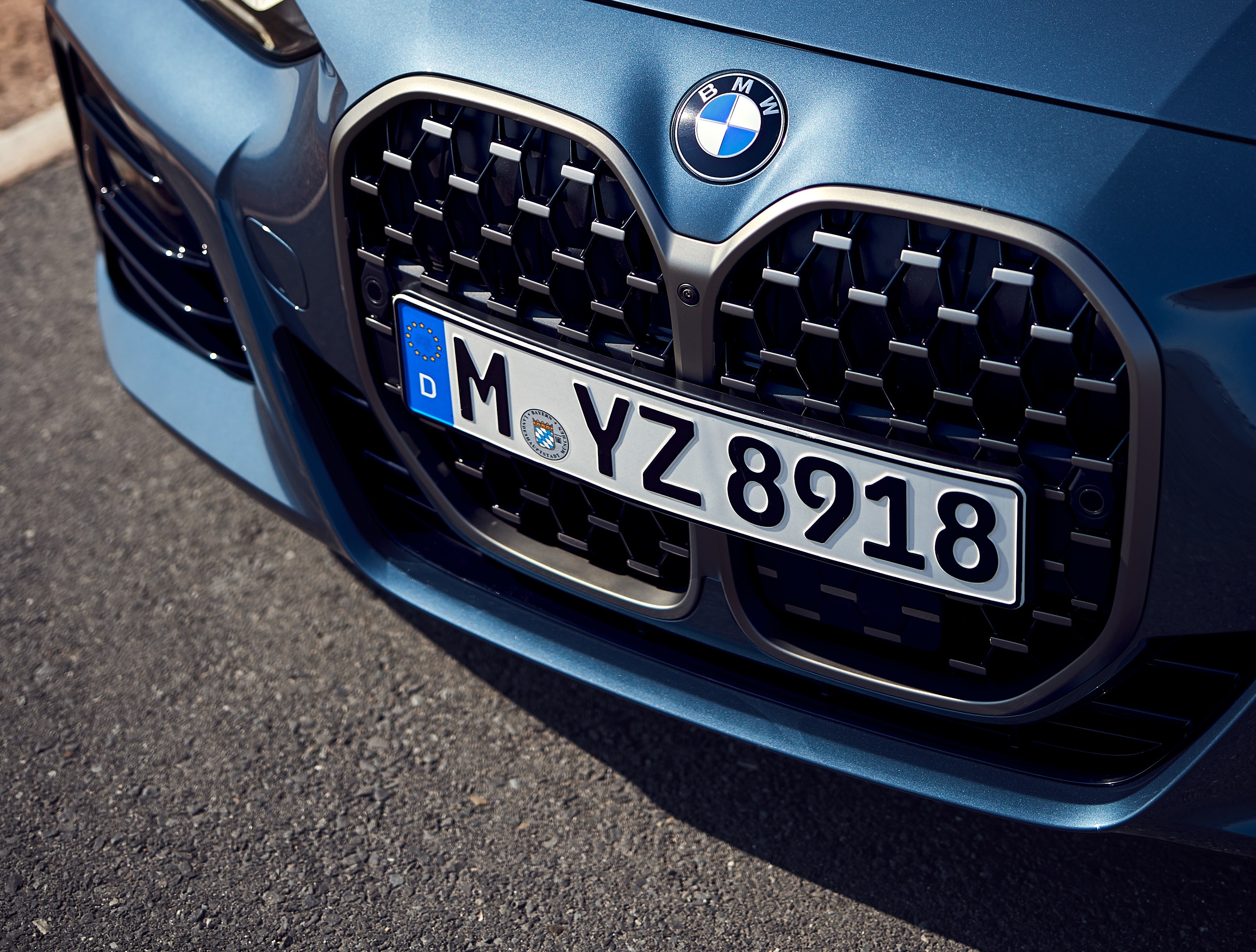 In a bid to achieve a 50:50 weight distribution front to rear, the hood, front wings, doors and front suspension towers are made from aluminum.

Two engines are available for the new 4-Series Coupe in the U.S., both featuring increases in power and torque over the units they replace.

The rear-wheel-drive 430i Coupe is claimed to accelerate from 0-60 mph (97 km/h) in 5.5 seconds, while the superior off-the-line traction of the all-wheel-drive 430i xDrive Coupe provides a slightly sharper time of 5.3 seconds.

As with their respective predecessors, both engines are mated to a standard 8-speed automatic gearbox, with the 440i xDrive Coupe benefiting from a standard electronically controlled rear M-Sport differential lock that provides torque vectoring by varying the amount of drive sent to each individual rear wheel.

In a return to its roots, the 4-Series Convertible swaps its folding hardtop roof for a multilayer fabric structure. Similar to the arrangement on the 8-Series Convertible, this will include a composite tonneau cover and a dedicated stowage area.

The M440i xDrive will be the initial range-topper before the second-generation M4 arrives before 2020 is out, with North American deliveries expected at the start of 2021.

The M4 again will be offered with the Coupé and Cabriolet bodystyles, as well as in standard RWD and top-spec AWD Competition forms.

The regular M4 will use the twin-turbocharged 3.0L straight-six featured in the recently launched X3 M and X4 M SUVs and also will be used by the new M3 sedan.

BMW also plans to add 4-door practicality to the M4 lineup for the first time by offering a Gran Coupé version. 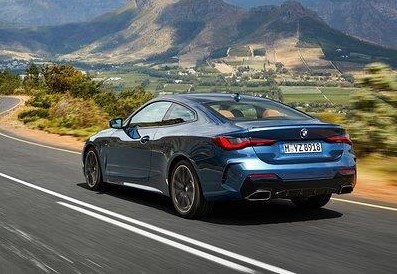 The junior sibling of the recently introduced M8 Gran Coupe is scheduled for launch in 2022 as a rival to the Audi RS5 Sportback, according to BMW sources. They tell Wards the popularity of the original 4-Series Gran Coupé in North America and China drove the decision to introduce its successor to the M4 range.

The versatility of the CLAR platform that BMW introduced in 2017 is displayed by plans to base the i4 on the same structure its conventionally powered siblings use – the first time BMW hasn’t used bespoke underpinnings for an EV.

Based on the 4-Series Gran Coupé, alongside which it will be assembled in Munich, the i4 will produce up to 523 hp and 600 lb.-ft. (813 Nm) of torque from a motor on each axle in AWD guise, dubbed the i4 xDrive.

The electric driveline is combined with an 80-kWh lithium-ion battery pack that BMW claims will provide the most efficient i4 model with a range of 373 miles (600 km) on the WLTP test cycle.

The i4 is due in 2021 as the first in a wave of new electric cars being developed by BMW. The company plans to launch up to 25 plug-in hybrids and EVs by the end of 2023.