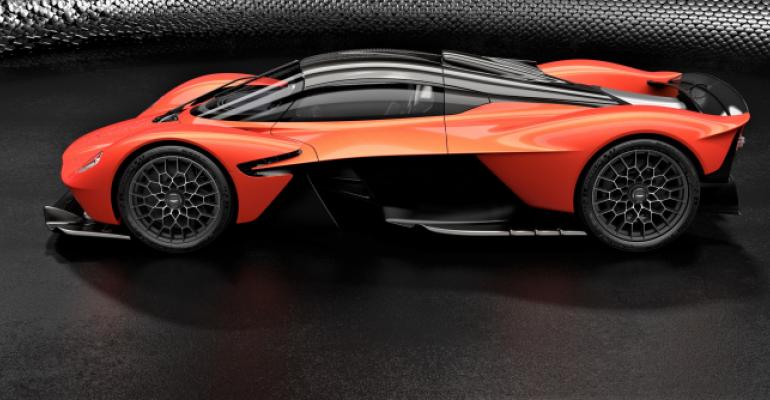 As a point of reference, the Valkyrie’s key supercar rival, the Mercedes-AMG One, is claimed to boast at least 986 hp from its hybrid drivetrain, which uses a turbocharged 1.6L V-6 together with MGU-K (motor generation unit-kinetic) and MGU-H (motor generation unit-heat) functions as part of a complex energy recovery system.

Britain-based Cosworth has designed the combustion engine and has been commissioned by Aston Martin to assemble 150 engines for the low-slung Valkyrie, which has been designed in partnership with Red Bull Racing. Another 25 examples of the new V-12 are expected to be produced for the track-only Valkyrie AMR Pro race car.

Cosworth says the new engine will be capable of reaching peak revs of 11,100 rpm. To achieve this, it receives uniquely machined lightweight internal components, including Formula 1-specification pistons.

It also uses port fuel injection rather than the direct injection of most modern gasoline engines. This allows it to meet emissions standards without the need to fit the Valkyrie with gasoline particulate filters, according to Cosworth. Fully dressed, the new V-12 is claimed to weigh just 449.7 lbs. (204 kg) and has been designed for a 62,000-mile (100,000-km) lifecycle.

The V-12 is bolted directly to the Valkyrie’s carbon-fiber monocoque body (below, left), supporting the rear suspension.

The electric motor and accompanying battery pack for the Valkyrie have been jointly developed by Croatian company Rimac and U.K. specialist Integral Powertrain.

The mid-hybrid drivetrain will be mated to a bespoke 7-speed gearbox with paddle shift actuation developed by U.K. engineering specialist Ricardo, the company behind the engines that power the current generation of McLaren models.

The electric motor is mounted between the engine and the gearbox, with a Formula 1-style energy-recuperation system designed to collect kinetic energy under braking to recharge the lithium-ion battery.

The battery pack provides both power boost and energy recovery functions, according to Aston Martin, while the electric motor is programmed to aid the mechanical performance of the gearbox.

Further engineering partners for the Valkyrie, known internally under the codename AM-RB 001, include Multimatic, which is responsible for the new Aston Martin model’s carbon-fiber monocoque.

Bosch has been commissioned to deliver the engine management system, traction control unit and electronic stability control systems; Alcon and Surface Transform will supply the carbon-fiber brake discs and calipers; and Wipac will deliver the headlamp and taillamp assemblies.

The Valkyrie name is taken from Norse mythology. It translates to “chooser of the slain.” Aston Martin says the name signifies the car’s role as its most potent product yet.

The Aston Martin Valkyrie is priced at $3.2 million, with the first deliveries expected before the end of 2019.