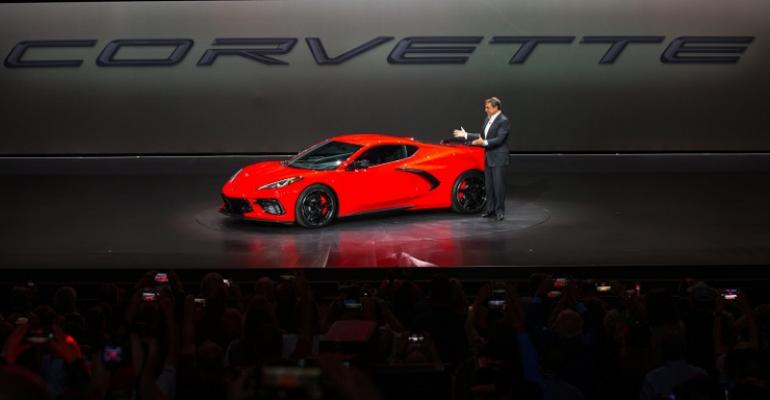 The heart of the Corvette always has been its naturally aspirated pushrod V-8, and the next-generation LT2 6.2L V-8 will make up to 495 hp and 470 lb.-ft. (637 Nm) of torque. It mates to an all-new 8-speed dual-clutch transmission.

SANTA ANA, CA – Faced with cooling demand in a market unfavorable to low-slung sports cars and a customer base needing a dose of vitality, General Motors unveils the ’20 Stingray and makes the automaker’s long-awaited first-ever mid-engine Corvette a reality. Finally.

The notion of a Corvette with its buttery smooth, high-output engine nestled behind the driver in the spirit of European rivals the car always competed with -- on price and performance but arguably not cache -- dates back 60 years to its founder Zora Arkus-Duntov.

Duntov never saw his dream realized and, although GM continued over the years to flirt with the idea through prototypes and concept cars, the automaker never was able to pull off the sea change. It was partly because over decades of refinement the Corvette with its front-engine, rear-drive layout became a killer performance coupe at half the price of its rivals. It also was composed enough for daily driving, which helped draw a rabidly loyal customer base and a resulting reluctance from GM management to make a radical change.

But with performance crossovers the hot ticket these days and most of the Corvette’s Baby Boomer buyers deep into retirement, it became a case of adapt to the preferences of younger enthusiasts or die. Its traditional layout also had run the course, says GM President Mark Reuss. 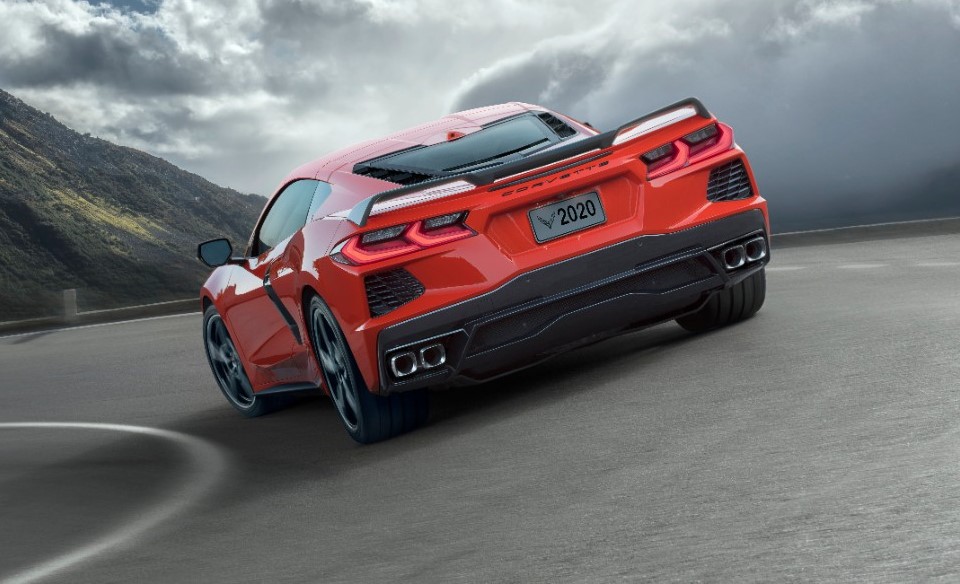 “Corvette has always represented the pinnacle of innovation and boundary-pushing at GM,” says Reuss, a modern-day Duntov in his passion for the car. “The traditional front-engine vehicle reached its limits of performance, necessitating the new layout.

“In terms of comfort and fun, it still looks and feels like a Corvette, but drives better than any vehicle in Corvette history,” he says during an unveiling of the eighth-generation model at the historic Tustin airship hangars here. “Customers are going to be thrilled with our focus on details and performance across the board.”

Corvette could use the attention. Sales of the car fell 25% last year to 18,791 units from 25,079 in 2017, according to Wards Intelligence data. Attribute some of that to certainty of the mid-engine redesign this year, but it is more than half of the peak 42,571 deliveries in 1977 when Boomers were entering their earning primes.

The heart of the car has always been its naturally aspirated pushrod V-8, which has delivered gobs of power and a symphonic exhaust note. The next-generation LT2 6.2L V-8 retains the overhead-valve design and the direct-injection fuel-delivery, as well as fuel-saving cylinder deactivation, which was added for the seventh-generation model’s engine. It will make 495 hp and 470 lb.-ft. (637 Nm) of torque with the optional performance exhaust. It mates to an all-new 8-speed dual-clutch transmission. 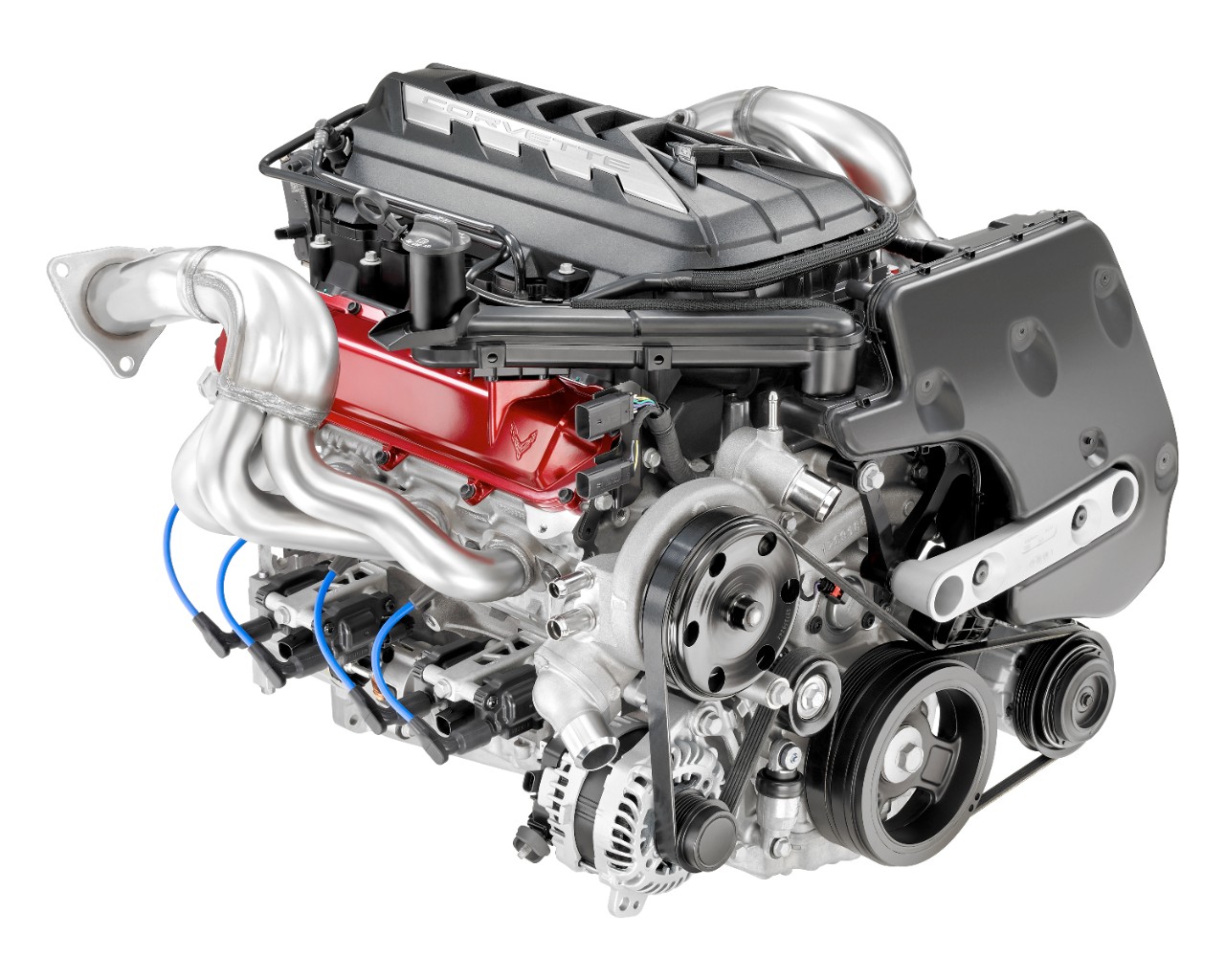 “The LT2 has been designed to deliver excellent low-end torque and high-end power to give thrilling pedal response at any rpm.”

But the biggest performance enhancement is the mid-engine placement, which gives the Stingray a super-low center of gravity and promises handling dynamics it could never have achieved otherwise.

Owners can gaze upon their Stingray’s V-8 through a lightweight, 3.2-mm-thick glass panel on the rear hatch, a setup not unlike the famous Audi R8. The panel includes a cantilevered trailing edge for heat ventilation. GM says the engine is set like a jewel and notes that all engine parts were designed with appearance in mind. 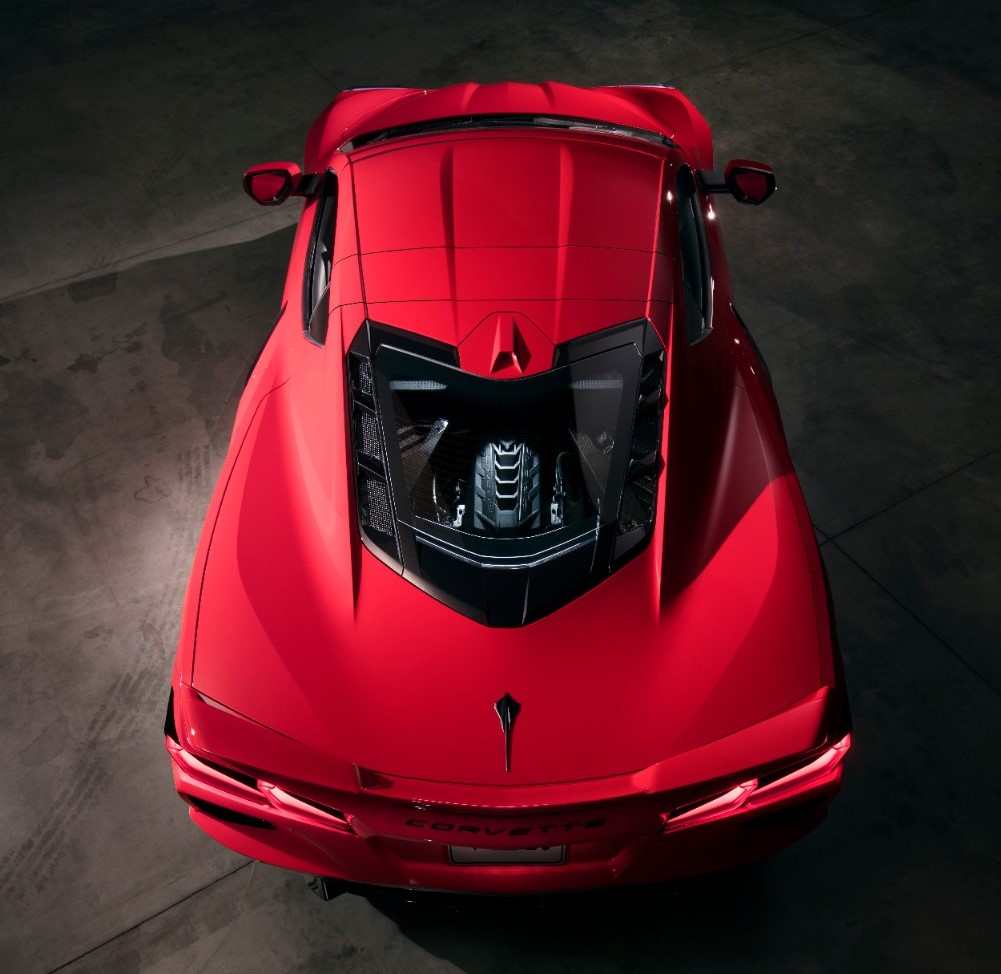 Other enhancements to the engine include a new aluminum block and vent system, while the centerline of the crankshaft sits 1 in. (25.4 mm) lower to the ground where it links with the transaxle for improved handling. A low-profile oil pan reduces mass, and its oil cooler capacity increases 25%.

The DCT promises fast shifts, via steering-wheel mounted paddles or automatically, with excellent power transfer. Specially designed with transmission expert Tremec, the goal was to deliver a spirited, direct-connection feel of a manual with the driving ease and comfort of an automatic gearbox.

The engine’s torque curve was optimized to take greatest advantage of the DCT’s performance with a low first gear to get the car off the line quickly, close-ratio gears between second and sixth and a tall seventh for easy cruising. The DCT is connected to the shifter by wire rather than mechanically. 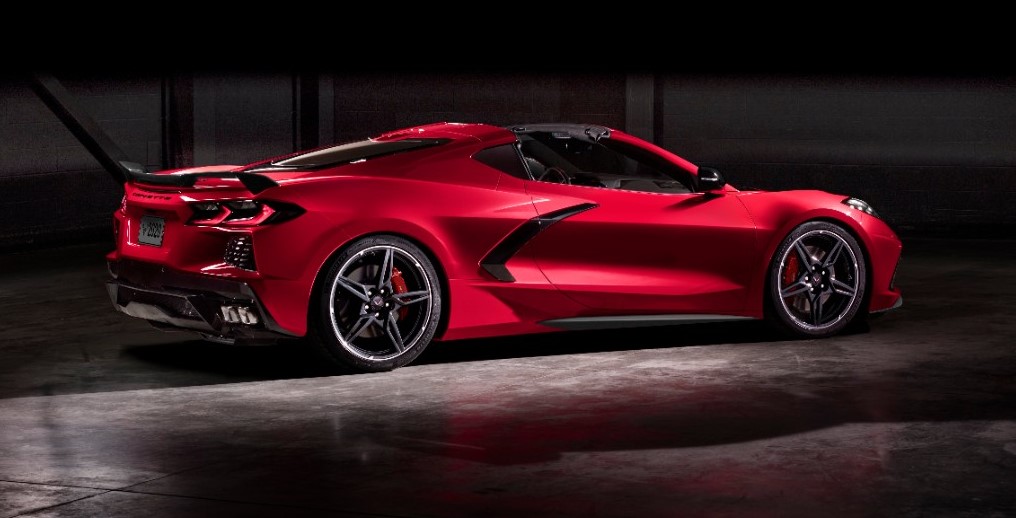 GM says the Stingray will be the fastest Corvette ever, sprinting to 60 mph (97 km/h) in less than 3 seconds when outfitted with an optional Z51 package and thanks to a curb weight just over 3,300 lbs. (1,497 kg). The mid-engine layout not only enhances weight distribution, but a rear-bias improves straight-line performance and its track demeanor.

Breakthrough design also has been a hallmark of Corvettes past, and the new model makes as dramatic a statement as its immediate predecessor, which critics lauded for its sharp, modern angles. The new Stingray, by contrast, is exotic and futuristic.

“As America’s most iconic performance nameplate, redesigning the Corvette Stingray from the ground up presented the team a historic opportunity, something Chevrolet designers have desired for over 60 years,” says Mike Simcoe, vice president-GM Global Design. “It is now the best of America, a new arrival in the mid-engine sports car class. We know Corvette can stand tall with the best the world has to offer.” 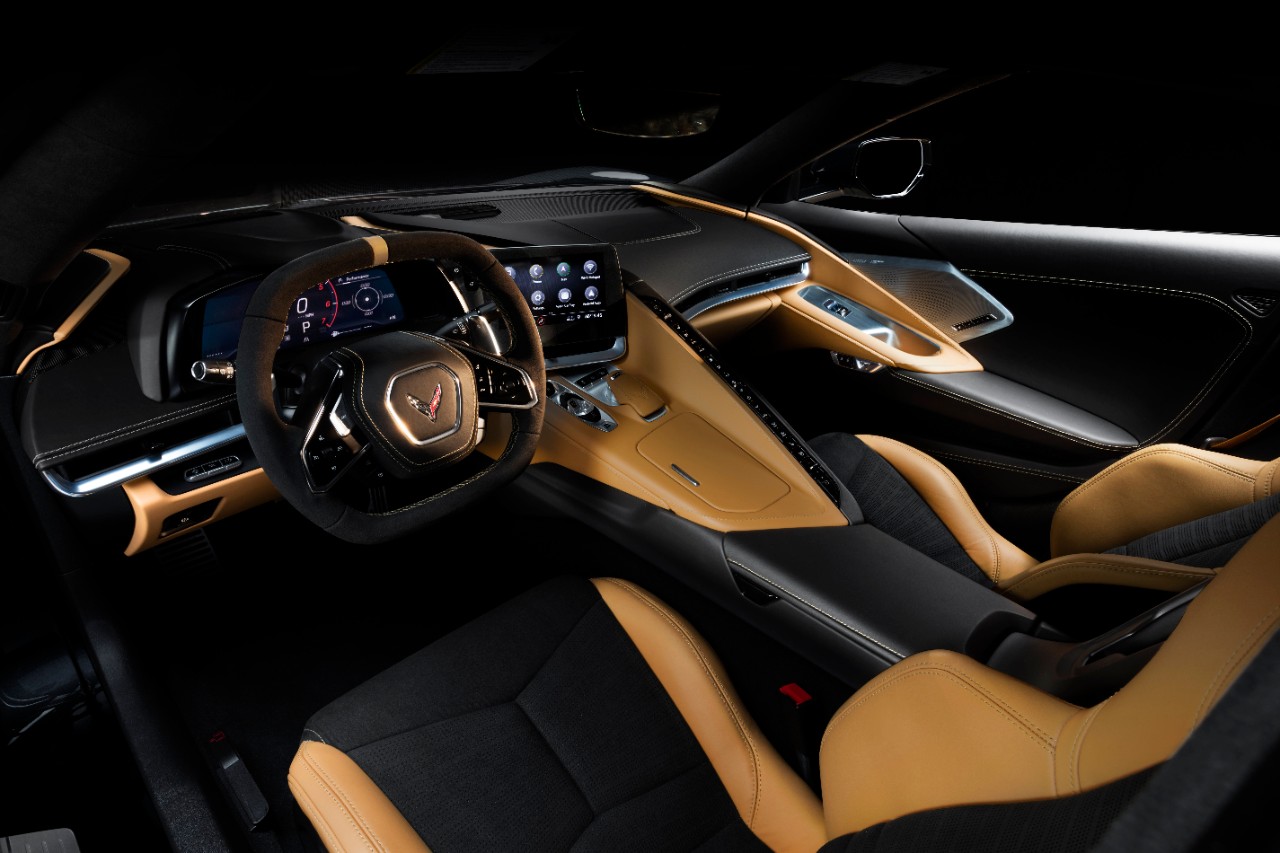 GM calls out the Stingray’s supercar level of craftsmanship, its premium materials, attention to detail and the engine placement as a focal point for a design historically inspired by jet fighters and Formula One racecars.

GM says interior highlights include hand-wrapped, cut-and-sewn leather components with thick press stitching; generous use of real metal; stainless steel speaker grilles with a Bose Performance Series audio system; carbon-fiber trim on the GT2 and Competition Sport Seats; and the choice of either authentic aluminum or carbon fiber for console and door sills. 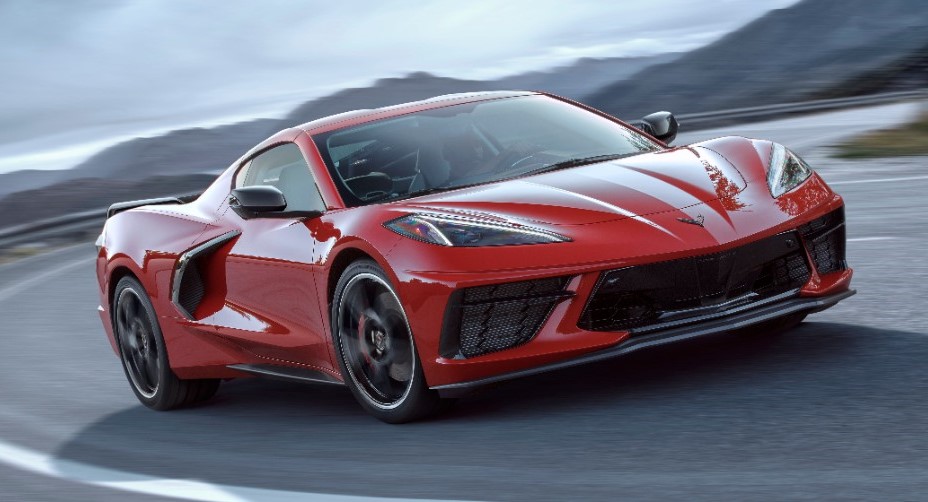