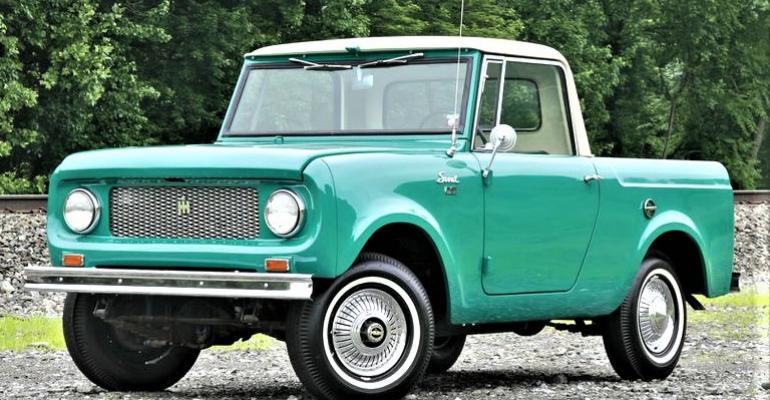 Volkswagen’s chief operating officer, Johan De Nysschen, suggests the modern-day Scout could be based on a VW-developed electric car platform and be similar to the Rivian R1S SUV, but “at the $40,000 price point instead of $70,000.”

Volkswagen could revive the International Harvester Scout nameplate as a battery-electric SUV to be sold in North America, according to the company’s chief operating officer, Johan De Nysschen.

At a media event organized by Volkswagen, De Nysschen tells journalists the German automaker, which obtained the trademark to the International Harvester Scout name via its commercial-vehicle division in 2020, was considering a relaunch of the iconic U.S. brand.

De Nysschen hints the modern-day Scout could be based on a Volkswagen-developed electric car platform and be similar to the Rivian R1S SUV, but “at the $40,000 price point instead of $70,000.”

The comments by De Nysschen come after Volkswagen CEO Ralf Brandstaetter, revealed to journalists at the recent Munich auto show that the company is developing an electric-powered SUV with “extreme off-road ability.”

Officials at Volkswagen’s headquarters in Wolfsburg, Germany, refused to comment directly on a possible return of the Scout when approached by WardsAuto. However, they pointed out the automaker has no plans to launch a battery-electric pick-up truck.

“Volkswagen continues to drive forward the further development of the brand and the portfolio in the U.S.,” the company says. “There are a wide variety of considerations in this context. However, an all-electric pickup is currently not planned.”

While VW has denied plans for a pickup truck, suggestions are the revival of the Scout could be based on an earlier Volkswagen SUV design study known internally as the ID. Ruggdzz and based on the automaker’s MEB electric car platform.

The ID. Ruggdzz was originally touted as a go-anywhere rival to the recently unveiled electric-powered Mercedes-Benz G-Class with both five- and seven-seat layouts based on a standard and long wheelbase. However, its development is claimed to have been put on hold following a decision to prioritize a smaller electric-powered hatchback and CUV pairing previewed by the new ID. Life concept.

According to sources cited by Wikipedia, International Harvester produced the Scout from 1961 to 1980. As a precursor of more sophisticated SUVs to come, it was created as a competitor to the Jeep. The Scout and second-generation Scout II were produced in Fort Wayne, IN, as two-door trucks with a removable hard top with options of a full-length roof, half-cab pickup, and/or soft top.