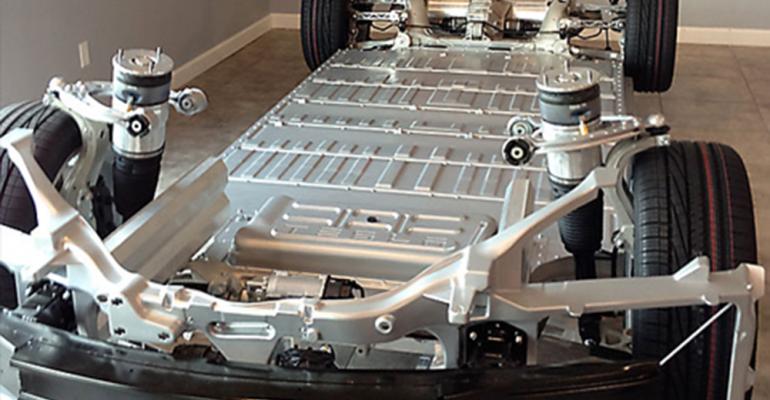 Panasonic is the leading supplier of batteries for hybrid and electric vehicles, thanks to its partnership with EV manufacturer Tesla, a study by Lux Research indicates.

The Tesla deal has allowed Panasonic to capture 39% of the plug-in vehicle-battery market, overtaking NEC with a 27% share and LG Chem with 9% in 2013, according to Lux’s Automotive Battery Tracker report.

The research firm’s findings are based on EV and PHEV sales trends, battery specifications for each car and OEM-supplier relationships.

The report also says the EV drivetrain is the “most lucrative” market for battery developers. The hybrid Toyota Prius may be the best-selling car in Japan and California, but its small battery pack requires less total energy storage than EVs such as the Nissan Leaf.

However, the Prius’s domination of the alternative-powertrain market made Toyota the leader in OEM battery demand (28%) in first-quarter 2014, ahead of Tesla (24%) and Renault-Nissan (21%).

Lear on the Grow in Morocco

Lear, a global supplier of automotive seating and electrical-distribution systems, has 122,000 employees located in 36 countries, with the Kenitra facility raising the number of workers in Morocco to 7,200.

SRG Global launches an expansion project that will more than double the size of its facility in Irapuato in Central Mexico.

The expansion will incorporate state-of-the-art tooling and equipment and include benchmarked, best-in-class wastewater treatment technology, SRG Global says in a news release. The project will create 230 new jobs, including the addition of technical staff to support around-the-clock engineering capabilities.

Shanghai-based SAIC will use the system for driving engine-cam systems to make precise laser measurements of valve displacement, spring displacement and motion of other valvetrain components in the engine head as the cams are spinning.

The test stand information will be used to enhance fuel economy by improving valve-spring performance and durability.

The SAKOR system features a single AccuDyne AC Dynamometer that drives both camshafts simultaneously. The AccuDyne is a 4-quadrant motoring dynamometer fully capable of testing both active devices and passive devices that do not drive themselves, including camshafts, pumps, clutches and compressors.

SAKOR also offers an enhanced version of the test system that can simulate the different cam phasing methods used in the development of engines that change timing depending upon the engine speed and load.

It also allows designers and producers to realistically experience the manufacturing process, by visualizing the material-fiber orientation. This helps detect any deformations that can compromise strength, quality and production due to a difference between the design intent and final product.

Magna Steyr and BMW this year signed a new contract ensuring the partnership will continue after the end of the current manufacturing contract for the Countryman and Paceman.

Magna Steyr says it has produced 2.5 million vehicles in 22 models as a contract manufacturer, the company says.

Meritor and Brakes India sign a licensing and technology assistance agreement for the manufacture and sale of Meritor ELSA air disc brakes in India.

Brakes India, established in 1962 as a joint venture between TVS Group and Lucas Industries (now integrated with TRW), reported sales of more than Rs30 billion ($500 million) in its most recent fiscal year.