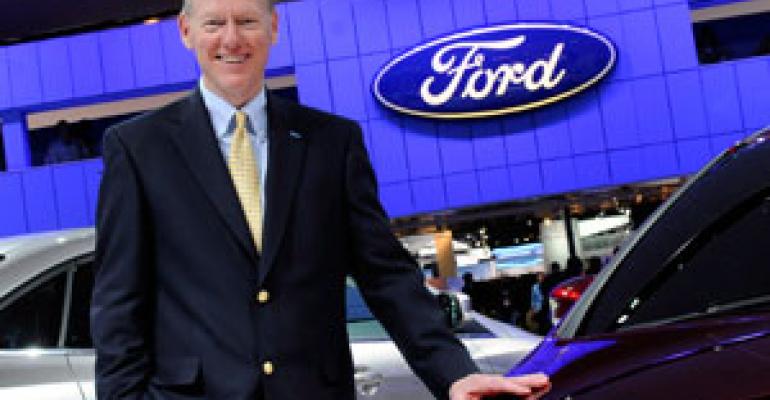 Mulally Says Q2 Profit to Have No Bearing on UAW Negotiations The results mark a $201 million decline from year-ago, including special charges totaling $172 million related to the closing of Mercury, some staff cuts in North America and pension settlements in Belgium.

“These numbers are very positive for our negotiations,” he says today in a conference call with analysts and journalists. “They demonstrate what we have done is a result of all of us working together on every element of competitiveness.”

Some pundits speculate Ford could face a more difficult time than its domestic competitors in negotiations with the UAW, set to begin Friday.

As a result of their bankruptcies, General Motors and Chrysler have no-strike deals with the UAW. Unlike Ford, GM, Chrysler or the UAW can ask for an arbitrator to determine a new labor contract should talks hit a wall.

Ford has shown continued profitability, with Q2 marking its ninth consecutive quarter in the black. That, combined with Mulally’s $26.5 million compensation package, has some speculating the UAW will take a harder stance in its negotiations with the auto maker.

“Nobody wants a strike,” he says. “The most important thing to do is continue to improve the competitiveness of business.”

Ford has continued to reinvest in its business, even during the height of the global recession, Mulally says, pointing to plans to hire 7,000 workers over the next two years.

“I think it’s going to be a very positive set of negotiations,” he adds.

Mulally says its important Ford and the UAW continue to keep the company profitably growing in order to provide “great jobs and careers.”

To maintain growth, Ford must continue to invest in new products, even if it erodes profits in the short-term, says Chief Financial Officer Lewis Booth.

“The only way to have great products is to have additional costs,” he says. “We’re in an expensive period, because we’re moving to global products and have big (vehicle upgrades).

“Over time that may moderate a little bit, but you will not see us backing away from world-class products,” Booth adds. “We’ve tried doing it the other way, and it doesn’t work.”

In Q2, most of Ford’s gains came from its home North American market, where it reported a pre-tax operating profit of $1.9 billion, a $10 million year-over-year increase.

Despite the gain, Mulally says Ford still has work to do, most notably improving quality issues surrounding the MyFord Touch infotainment system criticized for its complexity.

Asked whether Ford made a mistake in introducing MyFord Touch before all the bugs were worked out, Mulally defends the launch timing.

“What we’ve learned out of that is, we believe even more in MyFord Touch and Sync and voice activation than ever before,” he says, noting the auto maker is listening to consumer feedback to improve the system.

Ford faced a more difficult time in Europe, where economic uncertainty remains high. For the quarter, the auto maker reported a pre-tax operating profit of $176 million, a decrease of $146 million from year-ago.

Booth says Ford expects to be profitable for full-year 2011, but warns of some headwinds.

“The third quarter is always a bit of a sweat in Europe because of long summer vacation-shutdown periods,” he says.

Ford’s South America second-quarter pre-tax profit of $267 million represented an $18 million decrease compared with like-2010, which the auto maker chalks up to higher commodity and structural costs combined with inflation. Despite the decrease, Q2 represented Ford’s 30th consecutive profitable quarter in the region.

In the Asia-Pacific and African region, Ford posted a pre-tax operating profit of $1 million, down from $113 million from year-ago.

Booth says the lower profit reflects higher costs, including Ford’s substantial investments in the region, including a $350 million outlay to build its first transmission plant in China with initial capacity of 400,000 units.

While there is substantial growth opportunity in the Asia/Pacific region, particularly China, Booth says the bulk of Ford’s earnings is unlikely to come from there due to Chinese government requirements that the auto maker have a domestic partner.

“In China, our business is done in joint ventures, so we only see an equity share of profits,” he says.

The auto maker during Q2 managed to shave $2.6 billion of its automotive debt, including $2.3 billion in term-loans payments and full repayment of the outstanding balance on its $800 million revolving credit line.

Ford ended the quarter with $22 billion in automotive cash, an increase of $700 million from Q1.