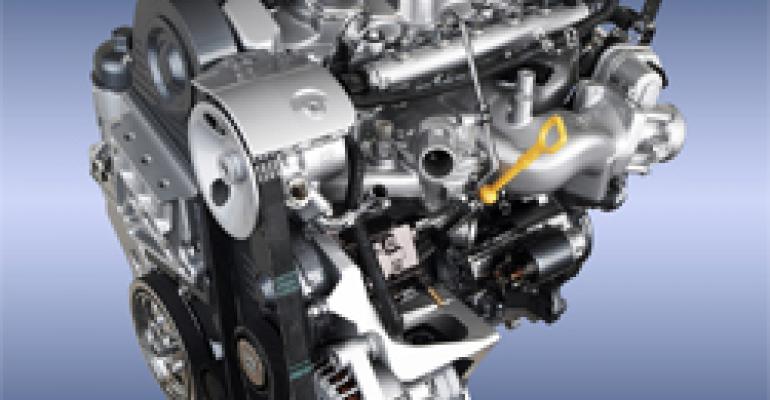 One of the auto maker&#8217;s 2.0L 4-cyl. diesels tuned for optimum efficiency reaches 43 mpg in the European combined test cycle. General Motors today confirms plans to outfit its Chevrolet Cruze C-segment car with an optional turbocharged diesel engine in 2013, putting to rest longtime rumors of the mill’s arrival and marking the auto maker’s return to a once-ignominious product offering.

GM says more details will be made available closer to the diesel model’s launch. Following the car’s current cadence that could push it into the ’14 model year.

Ward’s first reported GM’s plans to offer its first passenger-car diesel engine since 1980 one year ago, with then-product development chief Tom Stephens calling for an engine to compete against Volkswagen’s successful turbodiesel in the Jetta sedan and wagon and Golf hatchback.

Ward’s data shows the 2.0L 4-cyl. TDI in the Jetta accounted for 39.3% of the model’s U.S. sales in 2010. Volkswagen officials have said demand is so brisk that they sell the diesel car without incentives.

Until now, no auto maker has stepped up to challenge Volkswagen as the lone car company to offer a high-volume, affordable diesel engine in a passenger car in the U.S.

One dilemma for the industry is matching Volkswagen’s technology, which uses oxidation catalysts and regenerating particulate filters to meet emissions standards, by passing the need for an expensive urea-based selective catalytic reduction after-treatment system.

GM officials tell Ward’s it’s early in the planning stages to determine whether they will use SCR to make the diesel Cruze compliant with U.S. emissions standards, which are tougher than those in Europe.

They also decline to discuss sourcing for the engines, but it likely will come from Europe, where a pair of sturdy 2.0L variants already power the Cruze, rather than developing an-all-new U.S. model.

GM’s last try at a diesel-engine option for a car in the 1980s was with V-8 models, which quickly gained a poor reputation as dirty, loud and of suspect quality.

Despite appearing in 13 models in 1980, when GM dominated U.S. sales, the diesel engines accounted for just 4.9% of the auto maker’s deliveries, Ward’s data shows.

Those engines soured the attitudes of a generation of U.S. car buyers toward diesel engines that persists today.

Diesel engines currently comprise about 3% of all U.S. light-vehicle sales. But with the new CAFE requirements looming, experts expect that share to rise to more than 10% by 2015.