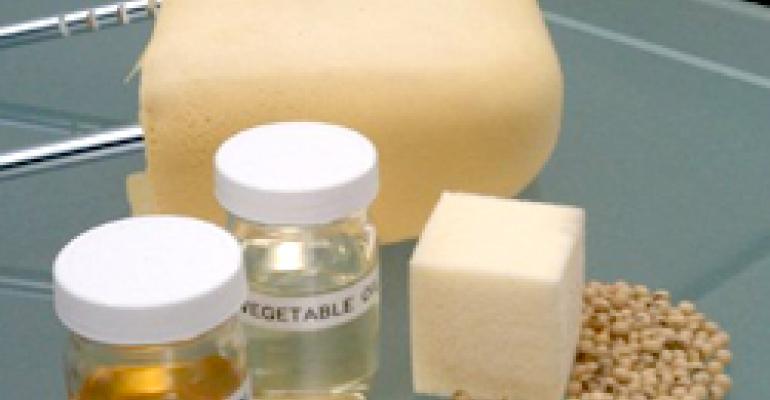 Soy foam has allowed the auto maker to cut petroleum use by 3 million lbs. annually. NEW YORK – Soy-based foam head restraints represent the latest success story in Ford’s movement toward renewable materials and away from petroleum-based plastics in its vehicles.

Working with Lear, Ford now uses environmentally friendly soy-based foam for 25% of the padding in a new head restraint.

The component still contains 75% polyol, but the trend toward sustainability is well under way, says Ellen Lee, a technology expert heading a plastics research team for the auto maker.

“One of our biggest success stories so far is soy foam,” Lee says. “About 75% of our vehicles contain soy foam in their headrests.”

Ford has been using soy foam in production vehicles since the material debuted in the seats of the ʼ08 Mustang sports coupe and migrated to the headliner of the ʼ10 Escape cross/utility vehicle.

The bio-based foam has allowed Ford to cut petroleum use by 3 million lbs. (1.4 million kg) annually.

It employs the material in producing the storage bin found in the Ford Flex’s third-row seats.

“Right now, the cost of using bio-based materials is a wash with petroleum-based plastics,” she says.

Eventually the bio-materials will be less expensive, because they are natural fibers that are byproducts of other industries, Lee says, but current prices are inflated in part by the lack of a regular supply infrastructure.

“The customer doesn't want to pay more for sustainable materials,” she notes.

Lee’s lab now is exploring the use of coconut fibers as a component of some plastics. Ford is working on the project with garden-supply company Scotts Miracle-Gro, which is shipping the material to the auto maker rather than disposing of it as waste from its production processes.

Lee says all the sustainable materials undergo rigorous durability testing to ensure they will last the life of a vehicle.

Much of her inspiration comes from growing vegetables at her Ann Arbor, MI, home, where Lee raises corn, sweet potatoes, carrots, asparagus, potatoes, spinach, kale, radishes and scallions, among other crops.