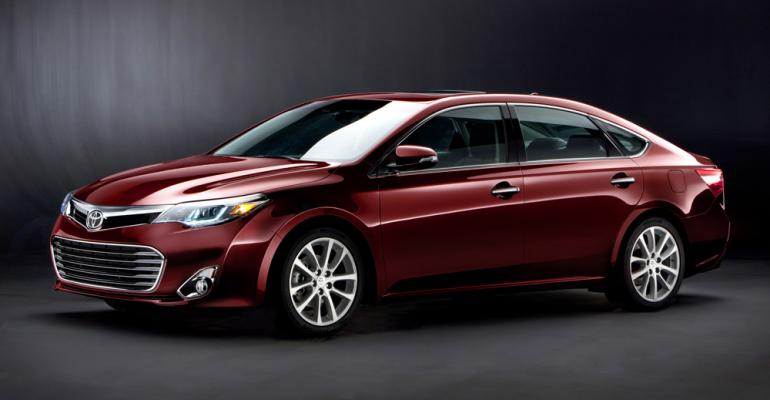 NEW YORK – After some secrecy, Toyota today shows off the next Avalon large sedan at the 2012 New York International Auto Show.

The Avalon is creating excitement within Toyota's U.S. ranks, as it is the first fully U.S.-designed Toyota. It was engineered at the auto maker's Ann Arbor, MI, research and development center under the leadership of one its first American chief engineers, Randy Stephens.

Carter says the Avalon fulfills a role for Toyota, one of design leadership.

The sedan has a fastback style with a low beltline that "accentuates a strong stance," Toyota says. Flared front fenders, reduced front and rear overhangs, a lower ride height, shorter overall length and smaller tire-to-body gap are changes from the current-generation Avalon.

The dash is a concave design, and the instrument panel is one piece with a covering that will be hand stitched in the car's assembly process, Carter says.

No specific information has been released on the Avalon’s engine or fuel economy, but Carter says the model unveiled today has "V-6 power." The current Avalon has a 3.5L 268-hp V-6.

Blind-spot and pre-collision systems will be offered on the '13 model when in launches late this year.

The Avalon has one of the oldest buyer demographics in Toyota's lineup, but Carter expects that to come down with the new model, similar to what has happened with the new Camry. Buyers of that car are averaging 52 years of age, down from 60 previously, largely thanks to the sporty Camry SE model.

Carter says buyers should expect a similarly focused performance version of the Avalon.

At the Detroit show in January, he hinted Toyota would offer an Avalon hybrid, although that possibility was not mentioned today.

Toyota will continue to build the sedan at its Georgetown, KY, plant.