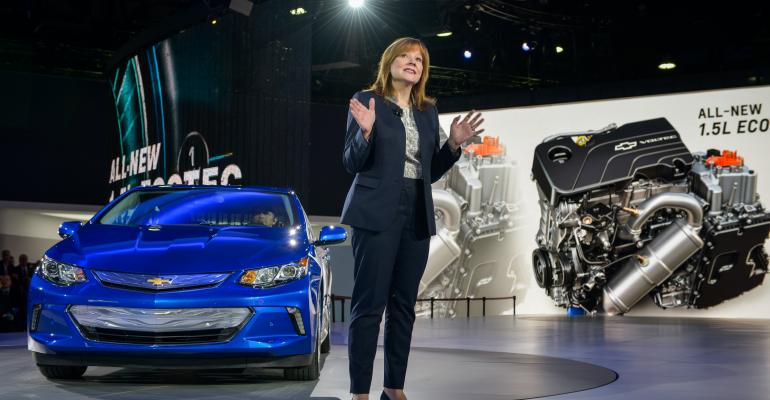 PHEV demand remains a fraction of the overall hybrid market, which accounted for 451,831 sales in 2014 and a 2.8% market share. But that also means there&rsquo;s considerable upside for the vehicles.

Sales of plug-in hybrid-electric vehicles remain a fraction of the market in the U.S., but deliveries are steadily climbing, and with fuel-economy and emissions rules tightening they could someday soon challenge traditional hybrid vehicles.

Sales of PHEVs have been trending upward every year since they began hitting the market in reasonable numbers five years ago, according to WardsAuto data. After selling just 326 units in 2010, deliveries climbed to 55,441 last year, claiming 0.34% of industry light-vehicle sales.

PHEV demand remains a fraction of the overall hybrid market, which accounted for 451,831 sales in 2014 and a 2.8% market share. But that also means there’s considerable upside for the vehicles, especially with fuel-economy rules possibly reaching 54.5 mpg (4.3 L/100 km) in 2025 and forcing automakers to make major efficiency improvements.

Consultant PwC Autofacts forecasts PHEVs to grow to 2.9% of U.S. sales, or exactly the share hybrids currently command. Luxury brands are taking the lead, as they seek to offset sales of their less-efficient models.

“If you need to make a step-function improvement, you have to put a plug on it,” says Pam Fletcher, executive chief engineer-Chevrolet Volt at General Motors.

Even if the 54.5 mpg bogey does not remain on the books – automakers and lawmakers next year will debate whether the target is realistic – future CAFE standards will go far beyond the 35.5 mpg (6.6 L/100 km) requirement of 2016.

Automakers likely will offer a combination of technologies to meet the regulations. But for the customer who wants one vehicle to meet his personal efficiency demands without range-anxiety, the PHEV is the answer, and a rush of models are flooding the market this year.

“If the customer has only one car, and he wants to (drive) both in the city and on long journeys, then absolutely the best solution is a plug-in hybrid,” says Heinz-Jakob Neusser, head of product development at the Volkswagen brand. Volkswagen plans to bring the Golf GTE PHEV to the U.S. next year.

Today’s internal-combustion engines have become so efficient, they rival traditional hybrids. The cost of key PHEV components, such as the batteries and magnets used for electric motors, also are coming down quickly, enabling automakers to offer models more attractive to consumers.

For example, the Chevy Volt, the best-selling PHEV in the U.S. with 18,805 deliveries last year, continues to evolve from what earlier critics called an expensive science experiment. It remains relatively costly to build and with a base price of $35,000 it qualifies as a luxury vehicle, but advances in battery technology, battery-building infrastructure and improved driving dynamics, the car arguably has never been more attractive.

For its ’16 redesign, the Volt’s range improves to 50 miles (80 km) from 38 miles (61 km) previously, and its total traveling distance jumps to 420 miles (676 km) from 380 (612 km). Perhaps more importantly, advances were made to important vehicle dynamics such as steering and braking feel and stopping distance, so it drives more like a traditional car. Tighter-fitting body parts and refined low-rolling resistance tires make the cabin quieter.

“We think we’ve got a good recipe,” Fletcher tells WardsAuto.

Former GM CEO Dan Akerson pledged to slash $10,000 from the manufacturing tab of each car with the second-generation Volt. Fletcher declines to comment on whether profitability has improved with the redesigned model but suggests as much, because the automaker has added a raft of new content without raising the sticker price significantly.

Fletcher points to the magnets employed for the Volt’s electric motors, which contain lower amounts of rare-earth metals, an advancement likely to yield enormous savings and one other PHEV makers are sure to mimic.

“We think we’ve broken the code,” she says.

Neusser says automakers are finding the sweet spot for the electric range of PHEVs, which leads to smaller batteries and lower costs. The VW Cross Coupe GTE concept shown at the Detroit Auto Show earlier this year travels 20 miles (32 km) electrically, far enough according to the automaker’s consumer research.

“When you say, ‘OK, the electric operating range is far enough, we don’t need more,’ then we can make the batteries smaller,” he says. “We can take steps out. That means it gets less expensive.”

But, at least for now, it does not go both ways, he adds.

“Do you want to bring the cost down or do you want to increase the range?” Neusser asks. “Perhaps in the future we will have both (choices available) and people can select whatever they want.”

Porsche, which has found a receptive audience for its Panamera S E-Hybrid PHEV, plans a plug-in version of its Cayenne CUV. The automaker considers weight the chief impediment to plug-in technologies.

“We have to work on them; they have to become lighter and lighter,” says Wolfgang Hatz, head of R&D, engines and transmissions, at Porsche. “That’s the main issue. That’s our strategy.”

BMW entered the PHEV market last year with its i3 and i8. Since the cars launched in the U.S., they have combined for 9,669 sales. The X5 xDrive40e CUV comes later this year. Honda will offer a dedicated PHEV model in 2018, and in the near future Audi will market PHEV variants of the A7 and A8 sedans, along with its Q7 e-tron PHEV. The A3 Sportback will be Audi’s first U.S. PHEV later this year.

“We like plug-ins (because) we like to keep maximum drivability, and from my point of view…the drivability is quite excellent,” says Scott Keogh, president-Audi of America. “The other thing we’re big fans of, if you look at how Americans go about navigating the world in their commutes, you’re talking about 15-16 miles (24-26 km) for the most part. We think we can cover a lot of America’s needs.

“But let’s also make no mistake, and this is the tap dance the industry is going to have in the marketplace, a customer needs to buy a really good product that they really like at a really good price.”

Mercedes-Benz will launch 10 new plug-in hybrid-electric vehicles by 2017, CEO Dieter Zetsche announced earlier this year. It starts in the coming weeks with the S550, which can travel up to 20 miles (32 km) electrically. The C350 PHEV will follow, with a range of up to 18.6 miles (30 km) on purely electric power.

Cadillac will add a second PHEV to its lineup to join the ELR, a Volt-derived plug-in whose impending death product chief Mark Reuss denied at the New York Auto Show, sometime in the 2016-2017 timeframe. GM does not plan to stop there.

“We will have more than one PHEV,” he says. “It’s going to be a big part of our powertrain strategy. If you don’t do that, you don’t play in China. So this is part of the new paradigm.”

– with David E. Zoia in Detroit