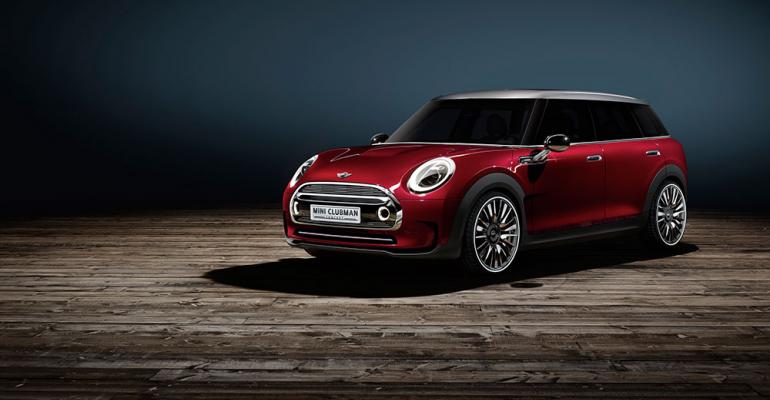 Classic Mini styling elements are less aggressively played up in the concept&rsquo;s design, as the automaker says it wants to emphasize sophistication and charisma.

BMW’s Mini brand will introduce at the Geneva auto show next week the Mini Clubman Concept, which the automaker calls “a new brand philosophy for a higher class of automobile.”

The concept bowing March 4 arrives as Mini begins turning over its model lineup, beginning with the third generation of its volume Hardtop model arriving at dealers this spring and underpinned by an all-new front-wheel-drive architecture for BMW Group.

“The Mini Clubman Concept shows how the Mini Clubman could be taken a step further (with) more interior space, a greater sense of high-end quality and yet still clever, bold and distinctive,” Adrian van Hooydonk, head of BMW Group Design, says in a statement ahead of the unveiling.

Key elements of the concept include recognizable Mini design cues such as a hexagonal grille, trademark side scuttles housing the marker lamp, a black band framing the lower edge of the car, short overhangs and elliptical front and rear lamps.

But those classic elements are less aggressively played up in the concept’s design, as the automaker says it wants to emphasize sophistication and charisma. A warm Berry Red paint highlights its surfaces and shapes, the automaker says, and the Clubman Concept’s colder Blade metallic gray roof serves as a contract. It is shorn with 19-in. wheels, big for the typical Mini with a multi-spoke design using both black chrome and chrome.

The split rear doors grow more elaborate with the concept and the rear lamps swing to a horizontal, rather than vertical, orientation. It adds a sensor under the bumper to open the doors automatically if you do not have a free hand.

The center console display, typically home to the oversized Mini speedometer, is reconfigurable to the preferred content or driving situation. In the latest production model of the Hardtop, the speedometer has been relocated for the first time to the driver’s instrument panel.

The Clubman Concept offers no future powertrain ideas, although the Hardtop uses a pair of new BMW engines – a 1.5L 3-cyl. making 134 hp and a 2.0L 4-cyl. boasting 189 hp, along with a new 6-speed manual transmission  – so those powertrains would be expected as Mini continues to roll out redesigns for each of its variants.