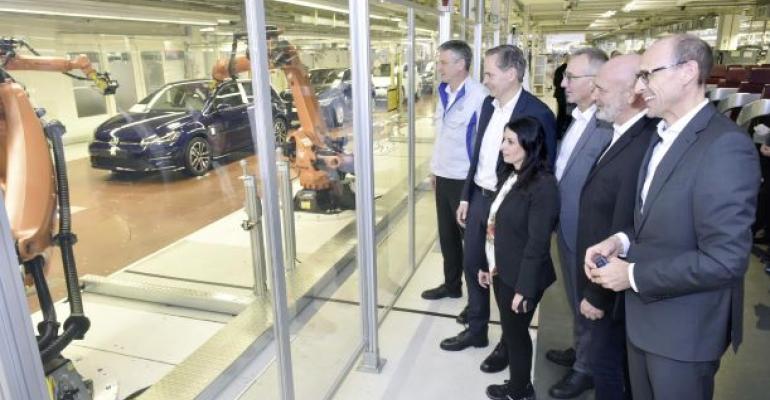 Cost-saving procedures see robots checking and adjusting the alignment of vehicle headlamps while human workers only need to turn on the lamps.

Volkswagen says it will spend tens of millions of dollars this year on digital cost-saving improvements at its production plants.

The pledge follows last year’s project which saw employees at the main Wolfsburg plant in Germany participate in 400 workshops exploring efficiency measures at the plant. Nearly 1,000 individual measures resulting from that program contributed to accelerating processes and lowering costs.

Digital solutions are seen as a key area for investment. The automaker cites the example of car body welds which will be robotically inspected by ultrasound and the data transferred to an IT system in real time. After the project is implemented, annual cost savings will be around €3 million ($3.3 million), VW claims, and it plans to roll out the solution to other production sites.

Other cost-saving procedures see robots checking and adjusting the alignment of vehicle headlamps while human workers only need to turn on the lamps, no longer having to get out of the vehicle to align the lamps themselves.

Also, the installation of doors and trunklids in vehicles by robots is being implemented over the course of the year. And data such as gap dimensions will be automatically processed further by computer analysis.

Plant manager Stefan Loth says: “We already accomplished a great deal in 2019. To become even more efficient, we want to invest in the digitalization of our processes and Industry 4.0 measures with a euro sum in the middle double-digit millions range in 2020 alone.”

Paving the Way for Passenger Options in Autonomous Vehicles
Jul 28, 2020