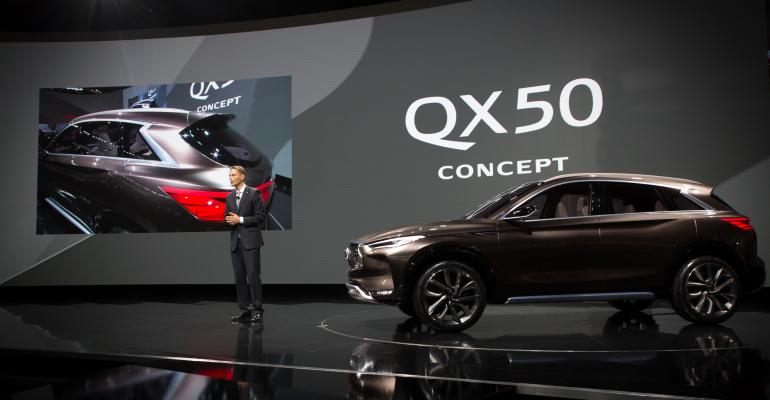 Rumors the two automakers might scrap plans to continue developing vehicles together were flatly denied at the Detroit auto show, where one of the biggest draws was the stylish CUV concept chartered with taking Infiniti interior design to the next level.

DETROIT – Infiniti’s new QX50 concept marks the next step in the automaker’s partnership with Germany’s Daimler and further evolution of the brand’s interior styling.

It also introduces breakthrough engine technology and promises the latest in advanced driver-assistance systems from the automaker.

Debuting at the North American International Auto Show last week, the show-stealing QX50 is a compact CUV that shares its underpinnings with the Mercedes GLA and upcoming Mercedes GLB CUV and will be built side-by-side with the GLB at a joint assembly plant under construction in Aguascalientes, Mexico, with capacity for 300,000 vehicles a year.

Due to begin production in late 2017 and hit the U.S. market as an ’18 model, the QX50 is the latest expression of Infiniti’s “Powerful Elegance” design language, in this case combining some muscular SUV cues with a more emotional, sporty treatment that is beginning to be a hallmark of the CUV sector.

Styling, bolder and more confident since the brand rolled out its Q50 sedan in 2013 as the first in a line of retooled models, has played a key role in Infiniti’s resurgence. Last year the luxury brand delivered a record 230,000 vehicles worldwide and set high-water marks in every region where it sells. That includes the U.S., where Infiniti sold 138,293 cars and trucks.

Design chief Alfonso Albaisa says the objective with the concept vehicle was to create “an Infiniti-ness with a new proportion.”

That proportion was dictated by use of a front-drive platform with a transversely mounted engine, where shorter overhangs prevail. To counter that and translate the road presence seen with bigger Infiniti SUVs to the compact QX50, the concept incorporates a sweeping hood line that extends past the A-pillar and down the length of the vehicle; a bold, upright double-arch grille; and bulging rear haunches that raise the visual center of gravity and add muscle to the unibody CUV.

The SUV cues are countered somewhat by the crescent-cut C-pillar and tapered roofline that lend a driver’s-car air to the QX50. The tapered, jewel-like headlamps feature LEDs in a “piano key” arrangement that provide a luxury touch. They turn off individually when traffic approaches to avoid blinding oncoming drivers.

But it’s inside where the QX50 takes the biggest transformational step in Infiniti design, marking a departure from the “dual cocoon” philosophy or previous models, in which driver and passenger sit in similarly carved-out spaces.

“On the QX50, we’re showing the next wave, where we’re still very driver-focused but have a little more sense of the passenger’s desire to have an open and roomy environment,” Albaisa says, pointing to the linear dashboard and slight angling that directs the center console away from the passenger.

“The driver-oriented aspect is how the (console and instrument-panel) leather is pinched and angled to the driver,” he says. “So the passenger side feels roomier and the driver’s side feels more technical, with stuff coming around the driver.”

The interior is completely wrapped in leather, but materials and color vary, creating a 3-tone look. Harder dark brown leather is used along the instrument panel and parts of the door inner, while seats and other door sections employ soft, white leather. A navy blue synthetic nubuck material runs in between. Bleached wood with silver dust rounds out the QX50’s interior accents.

The white leather that covers the door inners and seats gets a unique dot-quilting treatment in which each dot is individually sewn and there is no quilting button. Albaisa says this feature is unlikely to be in the production model at launch.

Power will come from the first application of Infiniti’s new variable-compression turbocharged 2.0L 4-cyl. engine the automaker says delivers 268 hp and will perform like a V-6 but offer 27% better fuel efficiency.

The production-ready engine “represents a compelling alternative to diesel powertrains,” Infiniti says in a statement.

The concept takes Infiniti’s automated-vehicle-leaning technology a step forward, employing an array of laser scanners, radar and cameras to read the road ahead and monitor the vehicle’s surroundings, the automaker says, as part of its new ProPilot system for automated driving. In the QX50, ProPilot will allow self-driving in stop-and-go traffic, and Infiniti promises it will update the technology suite with additional features in future production models.

Albaisa says the QX50 concept’s exterior is about 90% production – the retail model will need more conventional side mirrors, door handles and wheels, for instance, while about 95% of the interior should be seen with the production model.

The concept was created with more than the U.S. in mind, despite the market’s standing as Infiniti’s biggest by far and the world’s No.1 hotbed for CUVs.

“This one is global,” Albaisa says of the QX50. “Another big shift with the brand in the last four years or so is to really focus on not focusing on the U.S. It’s still the main market, with the highest volume, but China is obviously a major player.

“If the brand is attractive as a cult kind of thing, then you shouldn’t be messing with it so much for (a specific) market. When people buy into a premium car, they’re not just buying this car – they’re buying into the message. So we don’t modify this car. What meets the needs in the U.S. also meets the needs of the Chinese customer.”

Infiniti now has more tools at its disposal thanks to its platform- and production-sharing relationship with Daimler, Albaisa notes. Reports that the collaboration is on the verge of dissolving because the two scrapped plans to use Mercedes’ MFA2 platform (A-Class) for the next Infiniti Q40 were denied by Renault-Nissan CEO Carlos Ghosn during the auto show.

“We started with one particular platform and then we discovered that maybe this platform is not the best, so we changed that,” he told reporters in an NAIAS roundtable. “That doesn’t mean that the collaboration stops. It’s just we’re trying to optimize as much as possible for the consumer.”

Daimler CEO Dieter Zetsche also told reporters at the show there was no change in the scope of the tie-up between the two automakers.

Designing the QX50, the second Infiniti to come from the partnership after the QX30 (also based on the Mercedes MFA architecture), was a much easier task, Albaisa says, because the automakers have moved past the early, more awkward stages of collaboration.

“The first one was more like, ‛Hey, how are you and this is how we do things,ʼ” he says of the work that ultimately produced the GLA and QX30. “This one we are co-developing (more). Big things like the floor, the firewall and the engine bay (are) what defines a platform. (But) we can modify what we need. We have freedom because we engineer the upper body – the only limits are our own.”

Albaisa says credit for Infiniti’s record sales mostly goes to “our sales network and branding,” but acknowledges design has played a role in the latter.

“Three years ago the message we were getting from our executives is, the customer doesn’t understand us,” he says. “We were all over the place.”

Now there’s a “clarity of styling, messaging and everything,” he adds. “And we are part of the messaging.”

“That this is a brand that’s all about driving and technology. And (we) don’t drift too far away (from that).”

Infiniti QX50 Concept With ProPilot to Debut in Detroit
Dec 30, 2016