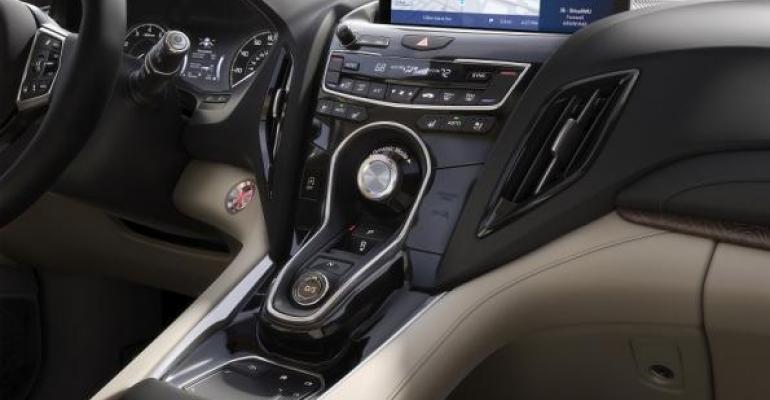 <p><strong>Acura&rsquo;s new single-screen infotainment system is controlled by touchpad at base of center stack.</strong></p>
Vehicles>Interiors

The new touchpad – lying horizontal in the center console, in easy reach with the driver’s right hand – aims to improve ease-of-use by corresponding directly to the screen: Touching the electronic pad is like touching the actual screen.

Acura’s center stack is getting an extreme makeover with the introduction of a new touchpad-controlled full HD display screen in the ’19 RDX.

“(Our goal) was to make a system that’s not only easy to use, but easy to learn,” Steve Hansen, chief engineer for the vehicle, tells WardsAuto in an interview.

The new touchpad-based HMI system with a single screen replaces Acura’s old, controversial dual-screen layout that used both a touchscreen and dial to control access to menus and functions. It created confusion among some users about what functions could be accessed in which screen.

“Our goal was, once you identify how to use the system, it’s very intuitive to use,” says Hansen of the touchpad’s “absolute positioning” technology, which the brand says is a world-first application.

Because Acura says its research shows vehicle owners like to consistently see navigation and audio information displayed while driving, the wide, 10.2-in. (26-cm) screen is divided into two zones, roughly a two-thirds/one-third display arrangement.

The smaller side of the screen, on the far right, is controlled via a smaller touchpad adjacent to the large main touchpad. In the demonstration here it featured audio, while navigation occupied the larger main zone.

“Now you can make adjustments to your channels, get more information about your music, but you don’t lose sight of navigation. The turn-by-turn (directions are) still going to be here. You make your adjustments, how you like your audio, and simply pushing the touchpad again returns (navigation) to the primary side. So these screens will flip back and forth as you like.”

When a selection is made on the screen, the touchpad gives a click sensation to let a driver or passenger know the action is being made without having to look. Touchpad sensitivity also can be adjusted via three settings.

Similar to touchpads in German luxury vehicles, the Acura touchpad also can recognize handwriting via fingertip. Its somewhat concave shape allows a user to find the touchpad’s corners without having to look.

Curbing driver distraction behind the wheel was another goal of Acura’s new center stack/HMI, featuring an Android operating system and faster processor and part of the “Precision Crafted Cockpit” that is bound for all the brand’s new and redesigned models.

The problem with many touchscreens, Hansen says, is they must be low enough to be easily reached by the driver. “But in the driving environment, you need to remove your eyes from the road and bring them down to the screen.”

Because of the RDX’s touchpad controller, Acura is able to place the vehicle’s display screen high on the center stack near a driver’s natural line of sight and mostly eliminating the need to look down.

Acura also has restructured onscreen menus and removed some functions from the touchscreen, such as heated and cooled seats, making all climate controls accessible via hard buttons for ease-of-use and to curb distraction.

“People like a button to heat their seat or cool their seat or change the HVAC (settings),” he says, adding Acura also has made a physical “Home” button for the infotainment system.

“There’s a balance between hard buttons and what you’re going to put in your displays, and I think we’ve created a very good balance.”

Like most newer display screens, such as the one in sister-brand Honda’s Odyssey minivan, the RDX’s is customizable similar to how a smartphone home screen can be rearranged. Icons can be moved by selecting one with a long hold of the touchpad and then dragging it to where you want it placed.

A new information display is in the gauge cluster, showing the typical navigation, trip computer and tire-pressure settings, but also with settings for Acura’s Super-Handling All-Wheel-Drive technology, which is improved for the ’19 RDX with the ability to send 40% more torque to rear wheels than previously.

A head-up display also is new for the CUV, controlled via physical switchgear on the lower instrument panel, left of the steering wheel. It also is customizable. By selecting a contact in his phone list, Hansen demonstrates how a prompt appears asking if he wants to add the person to his HUD.

Acura’s voice-recognition system also is remade for the RDX, with promised understanding of more natural-language commands. For example, an address can be rattled off in the common order of house number, street name, city and state vs. first having to say a state then city. A test here isn’t possible as the vehicle has a weak wireless signal.

The ’19 RDX, due on sale in the U.S. this summer, also has a thoroughly redesigned interior, with new materials such as matte, open-pore real wood – a current trend in luxury vehicles.