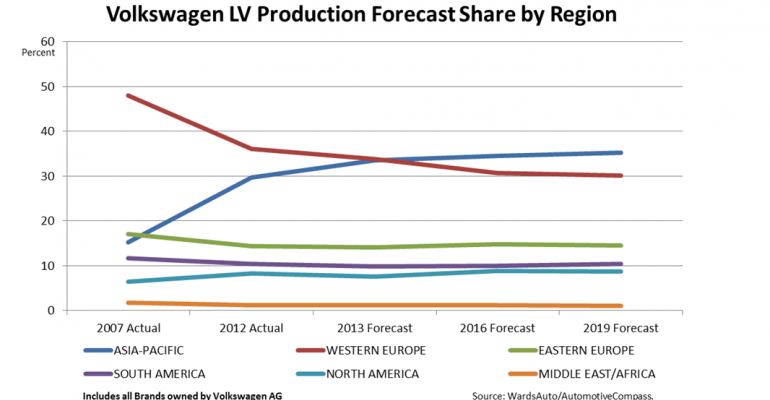 Additional capacity in Asia and North America will boost the German auto maker&rsquo;s volume in 2016 and beyond, with new plants in China, alone, adding more than 600,000 units annually.

Volkswagen will assemble the most light vehicles on the planet in 2016, topping Toyota while also fending off General Motors and Renault/Nissan, according to a WardsAuto/AutomotiveCompass global production forecast.

The outlook is based on output of all brands owned by Volkswagen, which, in addition to the VW marque, include Audi, Bentley, Bugatti, Lamborghini, Porsche, SEAT and Skoda. It also includes builds from the German auto maker’s joint ventures and other related manufacturers.

Over the next three years, Toyota’s LV production will lock in second place, while Renault/Nissan will push GM down to fourth. By 2016, both Volkswagen and Toyota will be building more than 10 million units, compared with 9.4 million and 9.7 million, respectively, forecast for 2013.

However, after four straight years at the top, Toyota will be surpassed in 2016 by a surging Volkswagen, which is forecast to remain the No.1 global manufacturer of LVs at least through 2019.

Volkswagen’s year-to-year growth from 2013 through 2015 will be relatively tepid compared with production trends worldwide, but added capacity in the Asia-Pacific and North American regions will boost the auto maker’s volume in 2016 and beyond.

During the next two years, Volkswagen will add output at three new plants in China that eventually will build 600,000-plus LVs in addition to the 2.7 million units assembled in the country in 2012 by its Shanghai Volkswagen and FAW-Volkswagen JVs.

With production increasing at its auto factories in India, Indonesia and Malaysia, Volkswagen’s output in the Asia-Pacific region will approach 4 million units by 2019, or 35% of its global builds.

Indeed, Volkswagen’s Asia-Pacific production will top that of the auto maker’s home region of Western Europe in 2014, just as China knocked off Germany as VW’s top market in 2012.

A second Volkswagen plant due to come on line in Mexico in 2016 to make vehicles for the Audi luxury brand will propel VW’s North American production to 1 million units by the end of the decade, up from 709,000 forecast for this year.

Eventually, production will grow in all regions for Volkswagen. Although Western Europe is expected to remain the auto maker’s second-largest market, production will stagnate and even may decline from 2012 through 2016. Builds will begin to rise after 2016 but take several years to return to 2012 levels.

Volkswagen production in South America, with nearly 90% sourced in Brazil, is forecast to follow Western Europe’s pattern until 2016, when output will rebound and top 1 million units. Production is forecast at 924,000 vehicles for the current year.

The auto maker’s output in Eastern Europe is expected to be flat in 2013 compared with prior-year, then is forecast to see modest gains through 2019, especially at its Czech Republic plants.

Among the other top five global auto makers after Volkswagen and Toyota, GM is forecast to be third in LV production in 2013, while Renault/Nissan swap spots with Hyundai (including Kia) to finish fourth.

Renault/Nissan is expected to overtake GM in 2016, although it will be nip-and-tuck, and Hyundai is forecast to still hold fifth place in 2016.